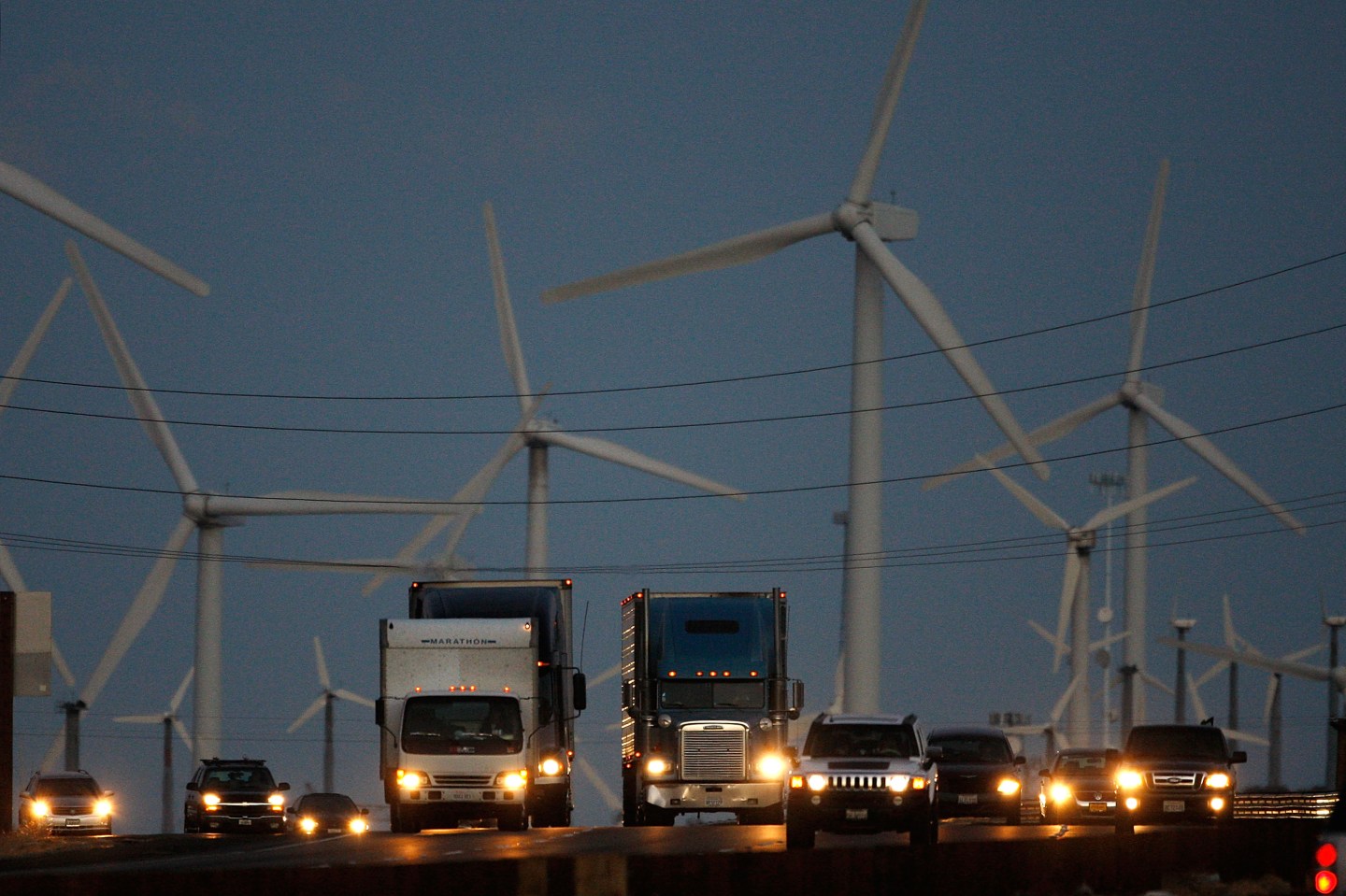 BANNING, CA - DECEMBER 8: Emissions-producing diesel trucks and cars pass non-polluting windmills along the 10 freeway on December 8, 2009 near Banning, California. Sustained global warming shows no sign of letting up according to new analysis by the World Meteorological Organization made public at the climate talks in Copenhagen. Although global temperature fluctuates from year to year, overall the decade of the 2000s is likely the warmest decade in the past 150 years covered by the report. This decade is warmer than the 1990s which were warmer than the 1980s, and so on. The conclusion meshes with independent analysis by the National Climatic Data Center and NASA. (Photo by David McNew/Getty Images)
Photograph by David McNew—Getty Images

U.S. regulators on Tuesday will announce final regulations setting fuel efficiency standards on medium- and heavy-duty trucks through 2027 that will cut 1.1 billion tons of greenhouse gas emissions, a source briefed on the matter told Reuters.

The rule sets first-ever greenhouse gas emissions limits on heavy-duty combination tractors and requires up to 25% lower emissions by 2027 for tractors used with tractor-trailer vehicles, delivery trucks, school buses, and other larger commercial vehicles, and will save $170 billion in fuel costs, the source said. The rule also requires annual increases in efficiency of 2.5% from 2021-2027 for heavy-duty pickup trucks and vans.

The rule is intended to boost the amount of fuel saved and emissions offset by 10% over the initial proposal unveiled last year and is expected to save up to 84 billion gallons of fuel. Regulators will cite input and technical data received during the public comment period in explaining the increase, the source said.

The California Air Resources Board in October had urged the U.S. Environmental Protection Agency and National Highway Traffic Safety Administration to make the final rule tougher, while the United Auto Workers union raised concerns about the impact of a tougher rule on employment.

The is the last major climate regulation of the Obama administration. It had put in place more modest emissions limits for some medium-and heavy-duty vehicles for the 2014-2018 model years, as well as doubling efficiency requirements for light-duty vehicles by 2025.

Regulators plan to eventually set rules limiting emissions from aircraft as part of a global deal announced in February.