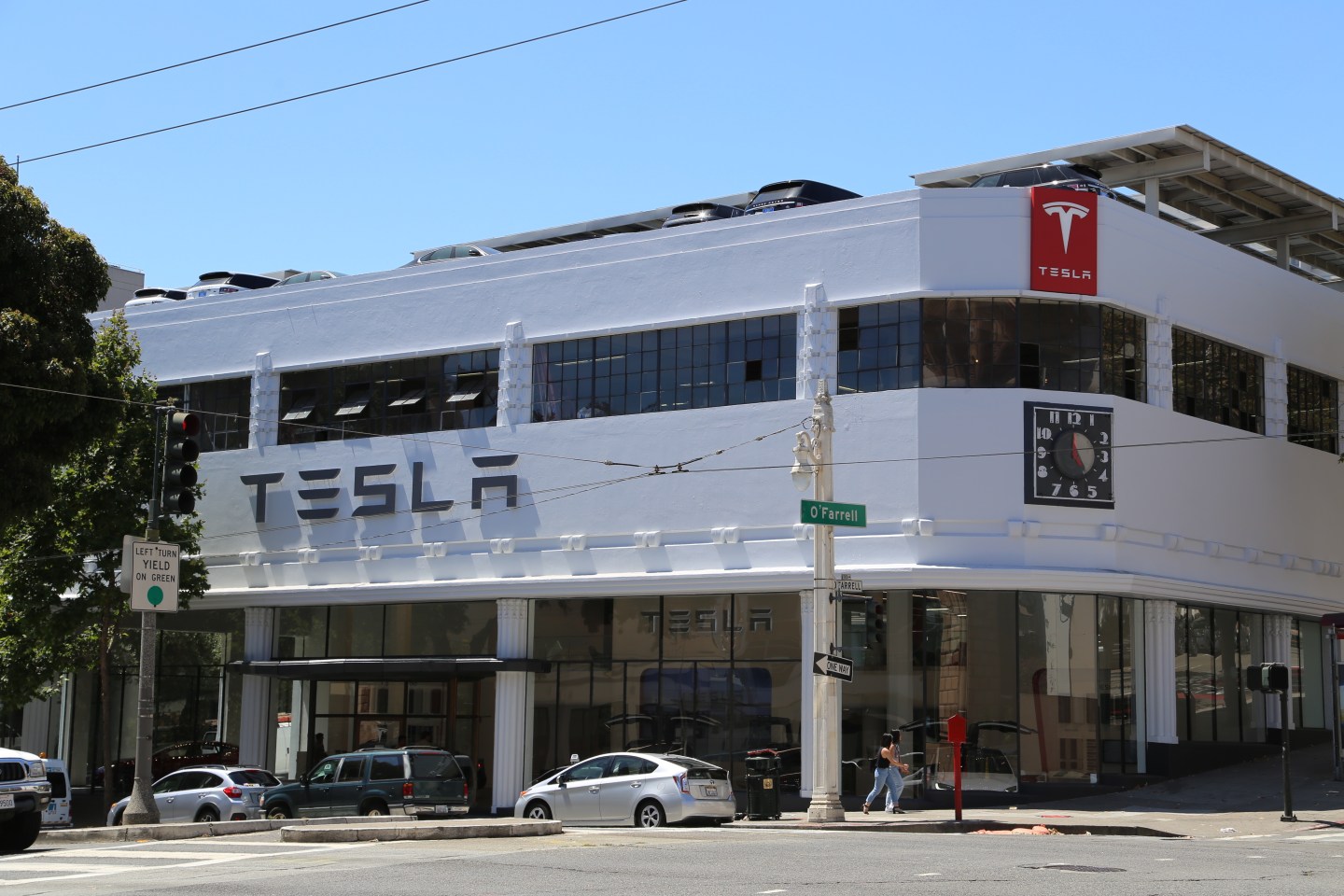 Electric car company Tesla Motors plans to open its first store in San Francisco this Friday as part of a strategy to rapidly expand the company’s retail footprint.

The store, which is its largest in the U.S. at 65,000 square feet, is located at the corner of Van Ness Avenue and O’Farrell Street. The three-story space will sell cars, educate consumers about electric vehicles and service customers’ cars.

The latest store is part of Tesla’s new retail push. For the rest of the year, the company plans to open up stores in new locations every four days on average. Many of these new stores will be larger in scale than previous stores, in order to accommodate Tesla’s growing car lineup as well as products from solar installer SolarCity (SCTY), which Tesla (TSLA) is acquiring.

On Wednesday afternoon Fortune took a tour of the store, which has sweeping floor-to-ceiling windows, and a massive screen advertising Tesla products. Here are some photos:

Tesla says because of the San Francisco store’s large size and location the company plans to do some of its product launches there.

On Tuesday night, Tesla held a VIP launch party at the store, which brought together hundreds of Tesla customers.

While Tesla is only selling the Model S and the Model X out of the store for now, down the road the company will also sell the Model 3 there, as well as its batteries for homes. Eventually if the SolarCity acquisition is closed, Tesla could also sell solar panels at its stores.

Tesla’s headquarters are in Palo Alto, Calif., and its auto factory is in Fremont, Calif, a short freeway drive from the San Francisco location.

For an inside look at Tesla’s Gigafactory watch our video.

The building has been occupied by various car companies over the years and is part of San Francisco’s historic auto row. Chevrolet originally built the showroom in 1937, the same year that the Golden Gate Bridge was opened.

Tesla’s store expansion, along with its acquisition and its massive battery factory, under construction outside of Reno, Nevada, won’t come cheap. The company plans to make $1.1 billion in payments and planned expenditures in the third quarter, which is about a third of its cash on hand.

The San Francisco store will be Tesla’s 260th location. By the end of this year Tesla hopes to have 300 stores, and by the end of 2017 Tesla expects to have 441 stores around the world.