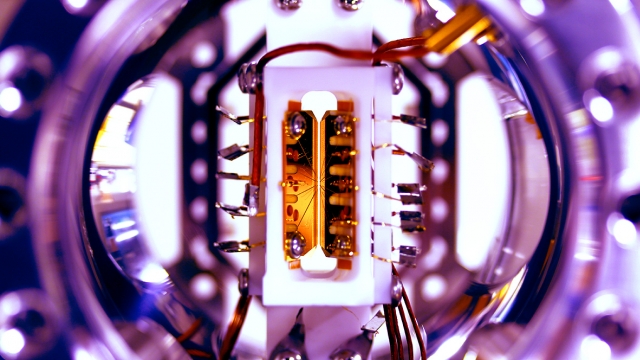 The details of the science are not for the faint-hearted. The device uses five quantum bits, or “qubits,” the equivalent of a single bit or switch in a conventional computer. That might not sound like much, but the revolutionary potential of quantum computing hinges on the ability of these bits to represent a greater number of states than the simple on-or-off options of an electronic bit. (Still not clear? Let Canadian Prime Minister Justin Trudeau explain it all).

According to the Joint Quantum Institute, the ability to reprogram the device for various tasks hinges on the use of atomic ions, held in place by electrode fields. Those ions are made to interact using lasers, in a process called “optical pumping” that sets each qubit to the desired quantum energy state.

The truly quantum part is that the lasers also ‘couple’ the ions, which, in JQI’s words, “notice” each other and become linked through their electrical repulsion. This is quantum entanglement, or what Einstein called “spooky action at a distance.” The lasers can link any two of the qubits, following commands held in a database in a more conventional computer.

Nearly as significant as its reprogrammability, the new device can potentially attach to and interact with copies of itself, making power scaleable. That’s crucial because quantum computing’s biggest potential lies in tackling really big problems in data analysis, image processing, and chaotic-systems forecasting.

For more on the future of computing, watch our video.

This isn’t yet a practical quantum computer, though. The team reported accuracy of 98% in their logic gates, significantly short of the 99.9% or more accuracy needed to build a working quantum computer, even in theory. The good news is that researchers at the University of Oxford have recently made significant advances in quantum gate fidelity.