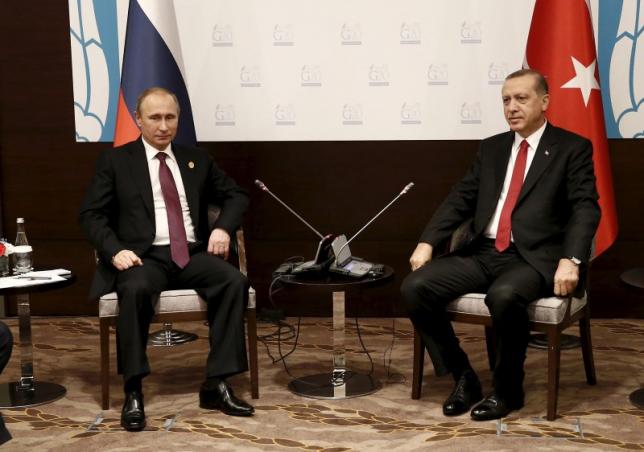 The talks, in the city of St Petersburg, are intended to end a period of high tension after Turkey downed a Russian fighter jet near the Syrian border last November. Russia imposed trade sanctions on Turkey and the number of Russian tourists visiting the country fell by 87% in the first half of 2016.

“This will be a historic visit, a new beginning. At the talks with my friend Vladimir (Putin), I believe, a new page in bilateral relations will be opened. Our countries have a lot to do together,” TASS quoted Erdogan as saying.

Erdogan and Putin will focus in their talks on Tuesday on the Syria conflict, trade, energy and the resumption of Russian charter flights to Turkey.

“Without Russia’s participation it’s impossible to find a solution to the Syrian problem. Only in partnership with Russia will we be able to settle the crisis in Syria,” Erdogan said.

Russia and Turkey have been on different sides in Syria, with Moscow backing President Bashar al-Assad while Ankara wants him ousted.

Erdogan’s meeting with Putin coincides with renewed strains in Ankara’s ties with the West after a failed military coup in Turkey in which more than 230 people were killed. Turkey accuses the West of showing more concern over a post-coup crackdown than over the bloody events themselves.

However, Turkish officials say Erdogan’s visit to Russia does not mean Turkey, a NATO ally and an aspiring member of the European Union, is turning its back on the West.