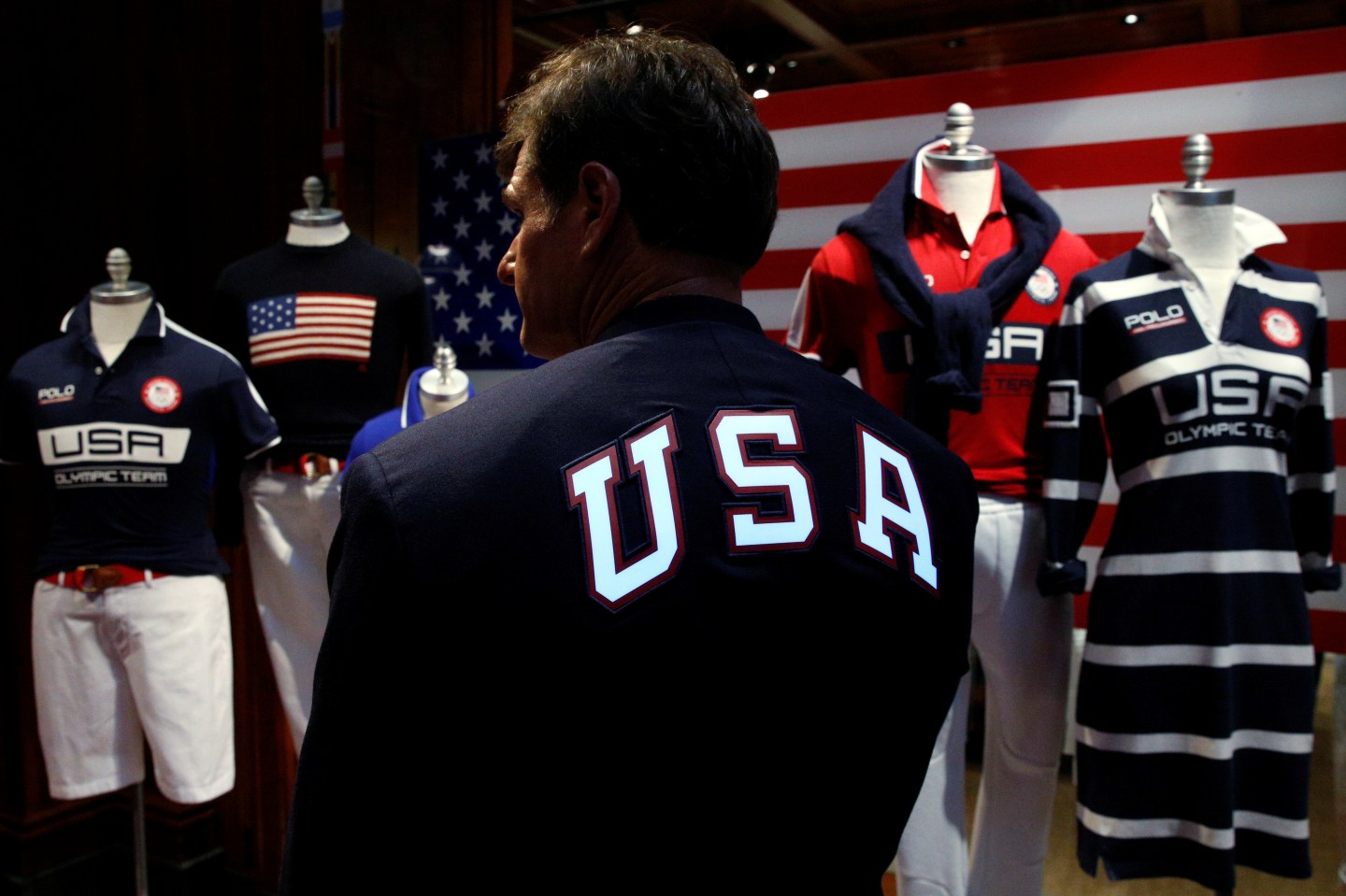 When Michael Phelps leads Team USA into Maracanã Stadium on Friday evening, U.S. flag in hand, the Olympic logo on his chest, and the USA letters on the back of his navy blue blazer illuminated by electroluminescent panels.

Phelps’ high-tech jacket, along with the rest of the U.S. Olympic team’s attire for the opening and closing ceremonies, is the handiwork of Ralph Lauren (RL), who is outfitting the U.S. Olympic and Paralympic teams for the fifth time since taking over licensing in 2008.

This year’s uniforms are made up of a red, white, and blue striped shirt, a navy blazer with gold buttons (though only Phelps’ lights up), tri-colored boat shoes, and selvedge white denim pants.

The pants in particular caught the attention of Michael Mamp, a fashion professor at Central Michigan University.

“The fabrication of denim is uniquely American, with an industry dating back to the Gold Rush in the 19th century,” Mamp said. “There couldn’t be a fabrication that’s more strictly rooted in American history.”

Clothing is a means of creating and communicating an identity, Mamp explained. That’s why the attire of Olympians is so important: on the biggest stage in the world, they are constructing an identity not just for themselves, but as representatives of their country.

Ralph Lauren was not always celebrated for its highly American Olympic uniforms, however.

Four years ago at the London Olympics, the clothing designer became a congressional punching bag when it manufactured Team USA’s uniforms in China, a move that drew the ire of politicians from both sides of the aisle.

“The pride of our Olympic athletics goes hand in hand with the pride of American innovation and manufacturing,” wrote Sen. Kirsten Gillibrand (D-N.Y.) in a letter to the U.S. Olympic Committee. “We shouldn’t be going to the world stage with anything less.”

It was not the first time U.S. Olympic uniforms had been manufactured overseas. But in the aftermath of a major economic crisis, some saw the news as symbolic of the globalizing manufacturing industry. Team USA’s uniforms were supposed to represent the height of patriotism, yet they were being produced in the country where many traditionally American jobs had been outsourced.

Ralph Lauren made every attempt to exude patriotism for the ensuing Winter Games in Sochi. A video feature showed the personal side of the manufacturing process and traced the location of American businesses involved in production. Founder Ralph Lauren declared his inspiration from the “dream of America.”

This year, the company is keeping production in-house for a second straight Olympics.

But aside from the denim and local manufacturing, Mamp sees another, subtler measure of patriotism reflected in this year’s uniforms: their portrayal of the changing American office dress code. The uniforms are likely preppier than what you wear to work, but the point, Mamp said, is that men are no longer expected to show up every day in a shirt and tie.

“This idea of a casual sort of elegance with the blazer and a pair of jeans is also very American,” Mamp said. “And reflective of what’s appropriate in the workplace in our country today.”