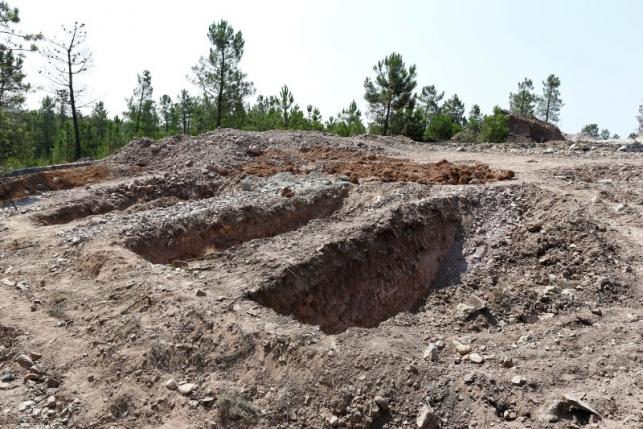 Unmarked graves are seen at the "Traitors' Cemetery", set up specifically to bury the bodies of coup plotters who died in the failed military coup of July 15, in Istanbul, Turkey, July 29, 2016. REUTERS/Osman Orsal
OSMAN ORSAL

Captain Mehmet Karabekir’s body was not washed before burial. Nobody recited prayers from the Koran before he was laid to rest in a hastily dug hole near an animal shelter, denied all Muslim rites.

He is among the dozens of Turkish soldiers accused of trying to overthrow President Tayyip Erdogan and the government in a failed military coup this month, his fate a sign of the fury felt over a night of bloodletting that killed more than 240 people.

Karabekir lies with no tombstone next to three other two-meter deep holes prepared with a mechanical digger. He was the first to be buried in a plot of land of about a quarter of an acre sectioned off last weekend in a disused part of a construction site on the eastern outskirts of Istanbul.

Istanbul Mayor Kadir Topbas called it “The Traitor’s Cemetery”—established, he said, specifically for coup plotters in the military.

The government of Turkey—a predominantly Muslim country—has detained, removed or suspended tens of thousands of people in the civil service, military judiciary and elsewhere over their suspected links with perpetrators of the attempted putsch.

While the crackdown has drawn concern and criticism from Western capitals, rights groups and some domestic opponents of the government, most Turks have shown unity in their opposition to the coup attempt, with regular rallies of solidarity.

But, for many people, the retribution across the country has gone too far with the “Traitor’s Cemetery”.

There has been widespread criticism this week, not just from rights groups, but also from Turks who took to social media to express their opposition.

This reaction has led officials to distance themselves from the cemetery.

Even though Turkey’s religious authority has said it will not provide Islamic funeral services for coup soldiers, a spokesman told Reuters that top cleric Mehmet Gormez did not support the establishment of a burial ground for traitors, saying it was hurtful to the families of the dead.

On Thursday Mayor Topbas, who was among the local officials who came up with the idea, told broadcaster TGRT Haber that he had ordered the removal of its “Traitor’s Cemetery” signage – though it was unclear if the plot would continue to be used for the same purpose.

A spokesman for the mayor did not return repeated phone calls.

There is no suggestion that Erdogan or the central government had any link with the municipal decision to establish the Istanbul burial ground.

Local media reported that Karabekir’s family refused to claim his body, prompting the authorities to bury him in the makeshift grave on Monday. His sister-in-law, when contacted by Reuters, said the family did not want to make any comment and requested privacy.

“Nobody should go to God with such darkness,” said a resident in the Acibadem area of Istanbul, where officials and newspapers said Karabekir shot dead a local administrator as he and a group of soldiers tried to seize a building. She declined to give her name due to the sensitive nature of the issue.

On July 15-16, rogue soldiers commandeered fighters jets, helicopters and tanks to close bridges and try to seize airports. They bombed parliament, police headquarters and other key buildings in their bid for power.

Erdogan blamed his ally-turned-foe Fethullah Gulen, a U.S.-based Islamic cleric, for orchestrating the attempted power grab and warned the perpetrators would pay a heavy price.

Gulen denies the accusations, but authorities have launched a crackdown on his vast network of followers, removing or suspending more than 60,000 soldiers, police, judges, teacher, diplomats and journalists.

Almost two thirds of Turks believe Gulen was behind the coup attempt, according to a phone poll of 1,496 people released on Tuesday. The Andy-Ar survey showed nearly 4% blamed the United States or foreign powers and about 2% blamed Erdogan.

The extensive purges that have followed have been internationally contentious. Erdogan’s critics fear he is using the events to crack down on all forms of dissent.

Rights group Amnesty International has said it had received credible evidence of detainees being subjected to beatings and torture, including rape, since the coup attempt—accusations roundly rejected by Turkish officials and the justice ministry.

The cemetery, guarded by private security guards and located inside the gated building site around 50 km (31 miles) east of Istanbul’s city center, has won some approval from some Turks but has largely drawn criticism.

“This practice is not right and our president Gormez has expressed his disapproval of it to the relevant authorities,” the spokesman for the Religious Affairs Directorate said.

Following the criticism, Karabekir, buried on Monday, may be the only person put to rest there.

“We have been told more people might be brought here but that hasn’t been the case,” said a security guard at the site.