With Growing Worries of Deflation, Is Australia Becoming ‘Desensitized to Sales’? 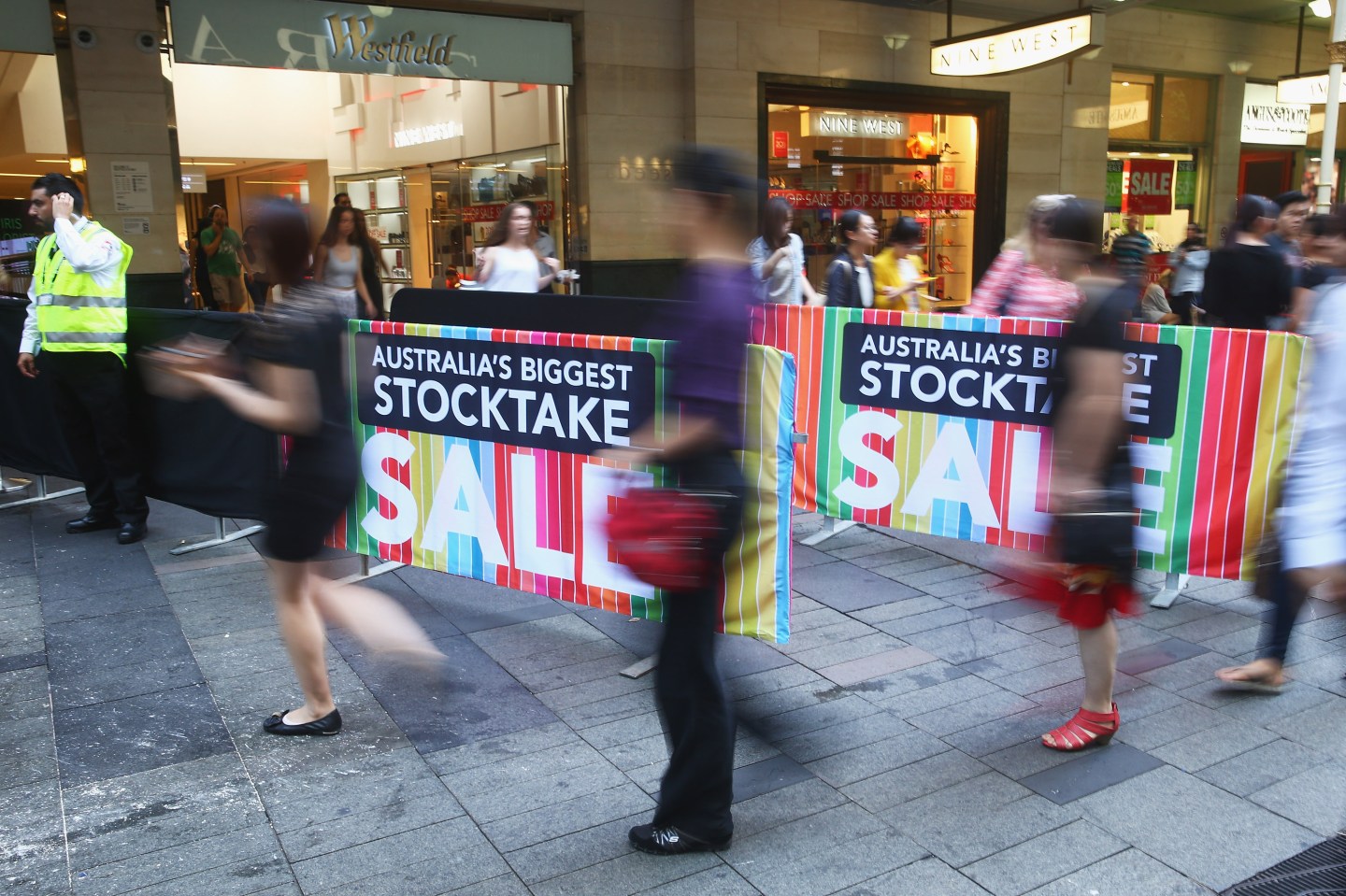 Signs announcing a sale are almost permanent fixtures in shop fronts in Sydney, but customers are still wary of spending – a worrying sign as falling inflation pushes the central bank to step up its support of the economy.

“We’re doing sales all the time now, all the time. It’s mental,” said Paulina Kelly, who works at fashion store Page One in central Sydney.

Yet a 40% discount has not prevented a near 50% slump in sales revenue between January and June at the store, she added.

Australia is still some way from outright deflation, or a persistent fall in the general level of prices. Yet data trends suggest the danger is more real than many might believe.

Crucial is how widespread discounting has become. While falling prices are great for individual customers, some are wary of a Japan-style malaise if people put off a purchase expecting to pick it up cheaper in a few months.

“It’s not deflation yet, but the risk is that if inflation stays this low for a couple of years, it’ll get baked into expectations and then, bang, you’re in trouble,” said Michael Blythe, chief economist at Commonwealth Bank.

On the face of it, this would not seem a problem for Australia. Official data shows the economy is growing briskly, with gross domestic product (GDP) rising 3.1% in the year to March and the jobless rate is under 6%.

See also: ‘I Can’t Rely on the Country’: Why Japan Is Turning to Riskier DIY Pensions

Yet both inflation and wages growth are at record lows. The consumer price index (CPI) fell in the March quarter for the first time since the 2008 global financial crisis. Retail sales have been anemic and consumer confidence is falling.

“I think at the moment customers have become desensitized to sales,” says Kelly. “They won’t buy a particular label until they know it’s on sale.”

Flat or falling prices are a plague to profit margins, forcing firms to cut costs. Wages, jobs, investment, research and travel all get the chop as the penny pinching ripples across the economy.

A targeted barrage of fiscal stimulus might help, but the newly-minted government of Malcolm Turnbull is politically committed to cutting spending and “living within our means.”

Key measures of underlying inflation braked sharply to an annual 1.5% in the March quarter, a shock to the Reserve Bank of Australia (RBA), which had been confident inflation would remain corralled within its target band of 2 to 3%.

As a result, the central bank was forced to slash its forecasts for inflation and break a year-long hiatus by cutting interest rates to a historic trough of 1.75%.

Figures due on Wednesday are likely to show inflation slowed even further in the second quarter, which could well prompt a further easing if only to prevent an activity-sapping rise in real interest rates.

“Bond markets globally already are pricing a lower-growth, lower-inflation environment and Australia can’t escape these forces,” he added. “This in turn means that the RBA will inexorably be forced to lower the cash rate towards global levels even though the economy is performing relatively well.”

Unfortunately, there are limits to how much monetary policy can achieve, as is painfully apparent in Japan’s experiment with negative interest rates. When interest rates are already at record lows, further cuts don’t give consumers too much benefit.

Neighboring New Zealand has already been caught in the low inflation trap. Growth is running at close to 3% in annual terms, but inflation is a mere 0.4% and its central bank is sounding increasingly desperate.

Australia’s consumer price index (CPI) measures 11 groups of goods and services and no less than six recorded price falls in the first quarter, ranging from food to clothing, communications, recreation and transport.

For more on consumer spending, watch this video:

Such a breadth of declines has not been seen in half a century of data collecting.

An even broader barometer of price pressure is the GDP deflator, which measures inflation across the economy.

This gauge has fallen in six of the last eight quarters, easily the longest stretch since the series began in 1959 – a period that includes seven recessions.

A primary cause is the price war among major retailers, which has only grown in intensity as foreign chains invaded Australia’s once sleepy industry.

At the front lines are the country’s two giant supermarket chains, Wesfarmers-owned Coles and Woolworths, where discounting has become endemic.

“I anticipate we’ll be dropping prices over the course of the next 5 years,” John Durkan, managing director of Coles, predicted recently.

Price deflation ran at 1.4% during the first three quarters of Coles’ financial year, a loss to revenue of roughly A$339 million ($253 million).

The final blow could come next year if the global deflationary machine that is Amazon (AMZN) launches its food service in Australia as rumored.

Amazon will “eat all our breakfasts, lunches and dinners,” was the verdict of Wesfarmers group managing director, Richard Goyder, in a retail forum earlier this year.