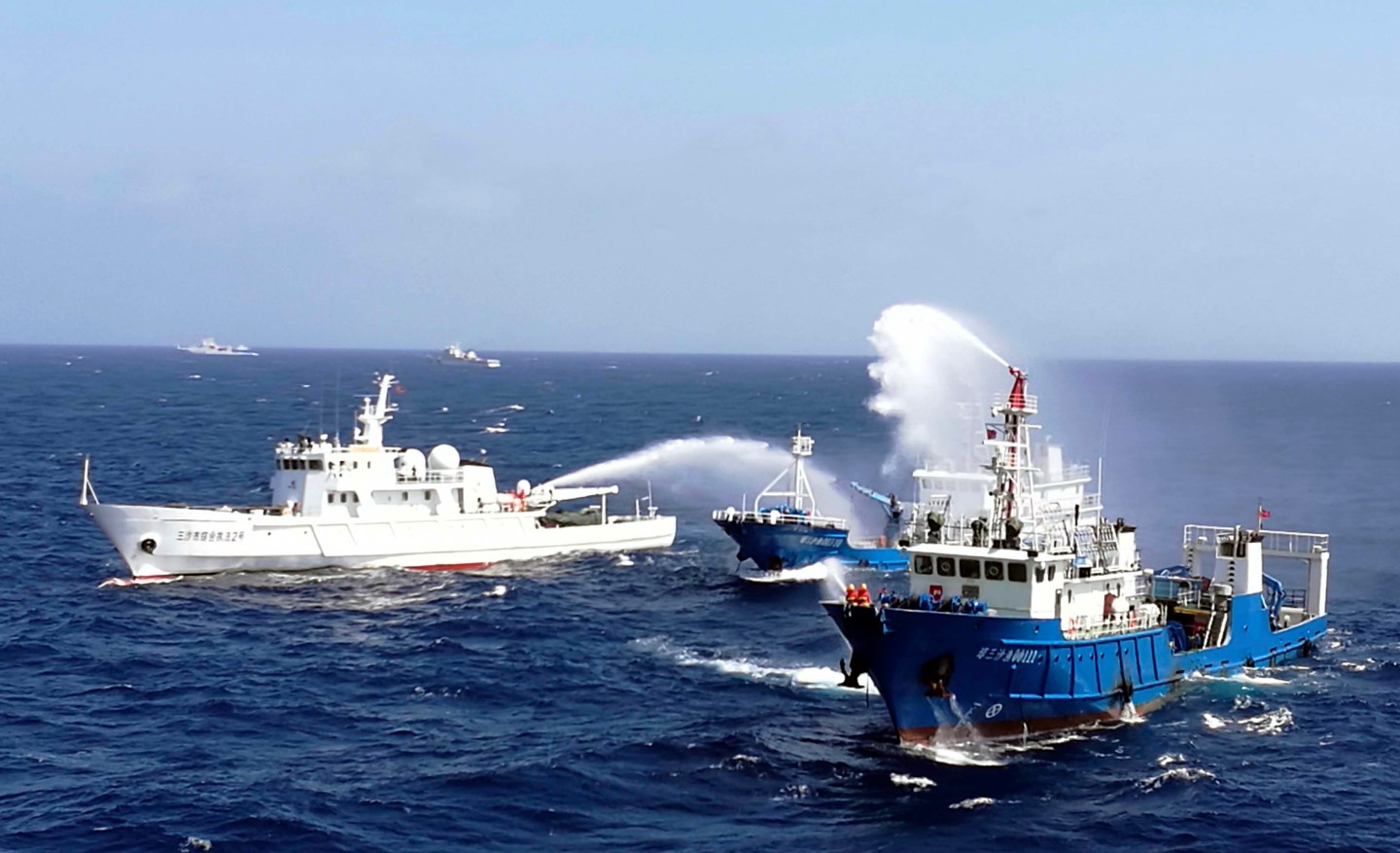 This photo taken on July 14, 2016 shows Chinese ships putting out a fire on a mock cargo vessel during an emergency drill in the South China Sea near Sansha, in south China's Hainan province. China warned on July 14 of a "decisive response" to provocations in the South China Sea, as it faced mounting pressure to accept an international tribunal's ruling against its claims to most of the strategically vital waters. / AFP / STR / China OUT (Photo credit should read STR/AFP/Getty Images)
STR/ AFP/ Getty Images

The Philippines, eager to resume development of vital oil and gas reserves off its coast, will likely need to reach an accord with a Chinese government infuriated by last week’s ruling that granted Manila a big victory in the South China Sea.

The Philippines relies overwhelmingly on imports to fuel its fast-growing economy. That reliance will grow further in a few years when the main source of domestic natural gas runs out, so the clock is ticking for it to develop offshore fields that China shows no sign of loosening its grip on.

Beijing has refused to recognize the ruling by the Permanent Court of Arbitration that granted the Philippines sovereign rights to access offshore oil and gas fields, including the Reed Bank, a shallow tablemount some 85 nautical miles off its coast.

And as long as things stay that way, the Philippines will have a hard time finding much-needed foreign expertise willing to risk upsetting China, officials and experts say.

According to U.S. oilfield services company Weatherford, one concession – SC 72 – contains 2.6-8.8 trillion cubic feet of natural gas. That would be as much as triple the amount discovered at the Malampaya project, an offshore field that powers 40% of the main island of Luzon, home to the capital Manila.

Malampaya, which was developed by Royal Dutch Shell and began operations in 2001, is approaching the end of its productive life. Its only viable replacements are in waters that China insists it will not cede.

See also: The world’s biggest winners and losers from cheap oil, in one chart

“Malampaya is going to run out of gas in 10 years so there is urgency for us to develop the Reed Bank,” said Antonio Carpio, a supreme court associate justice.

Carpio was part of the legal team that made the case in The Hague and said a big factor in the Philippines’ decision to pursue arbitration in 2013 was China’s obstructions around Reed Bank.

“Every time we send a survey ship there, Chinese coastguard vessels harass our survey ships,” he told news channel ANC. “That’s why we had to do something.”

The U.S. Energy Information Administration believes that beneath the South China Sea could be 11 billion barrels of oil, more than Mexico’s reserves, and 190 trillion cubic feet of natural gas.

Most foreign firms with capital and technology needed to develop those reserves, however, don’t want to risk being caught up in spats over jurisdiction and have avoided concessions offered in disputed waters.

Manila’s state-run Philex Petroleum has the controlling stakes in two stalled concessions, the 880,000-hectare SC-72 at the Reed Bank and the 616,000-hectare SC-75 off the island of Palawan.

The court verdict on July 12 sparked a surge in energy stocks the next day, with Philex shares up as much as 21%.

Philex says it is seeking a meeting with Philippine energy officials regarding the potential to lift a suspension order on drilling activities in the Reed Bank, in place since December 2014.

“It’s a matter of national importance. We don’t want to move on our own without guidance from the government,” Philex Chairman Manuel Pangilinan told reporters.

“We will need a partner … no local company has the expertise that we need.”

Department of Energy spokesman Felix William Fuentebella said there were no immediate plans to lift the suspension as the department awaited guidance from new President Rodrigo Duterte.

“The moratorium stays. We are exploring ways to resolve the conflict peacefully and we follow the lead of the President,” he said.

Manila and Beijing have both expressed a desire to resume talks, but the Philippines says it could not accept China’s pre-condition of not discussing the ruling.

Without an agreement between Manila and Beijing, finding development partners would be difficult, said Andrew Harwood, a Southeast Asia upstream analyst at Wood Mackenzie.

“There has to be some softening of Beijing’s stance before any companies would be willing to go and drill in any of the disputed areas,” he said.

Surveying on the disputed Reed Bank concessions began in 2003 under a Joint Marine Seismic Undertaking (JMSU) between Philippine state-owned PNOC Exploration Corp, CNOOC and state-owned PetroVietnam. Manila did not extend the agreement when it lapsed in 2008 after criticism from within the Philippines that the deal compromised its sovereignty.

The pact also caused a diplomatic upset in Southeast Asia as it was seen as undermining regional solidarity against an assertive China.

But some Filipino oil executives think teaming up again with CNOOC could solve problems on both the diplomatic and logistical fronts.

Pangilinan of Philex said he would not close the door on a China JV, while Philex President Daniel Stephen Carlos said a “farm-in” type deal was also being looked at.

Rufino Bomasang, a former Philippines energy ministry undersecretary and current executive chairman of Otto Energy Investments, an oil and gas exploration and production company, said restarting the JMSU with CNOOC should be considered.

“It is something worthwhile resuming,” Bomasang told Reuters. “If there’s good faith on both sides, why not? And I hope so.”

CNOOC did not respond to a request for comment.

China’s Foreign Ministry did not directly answer a question submitted by Reuters about whether the government would permit a Chinese firm to join up with Philex, but said in a faxed statement that Reed Bank was Chinese territory.

China wants to resolve the South China Sea issue through talks and is willing to set aside disputes for joint development before a resolution is reached, the ministry added.

“China is willing to have consultations and dialog with the Philippines about this,” it said, without elaborating.