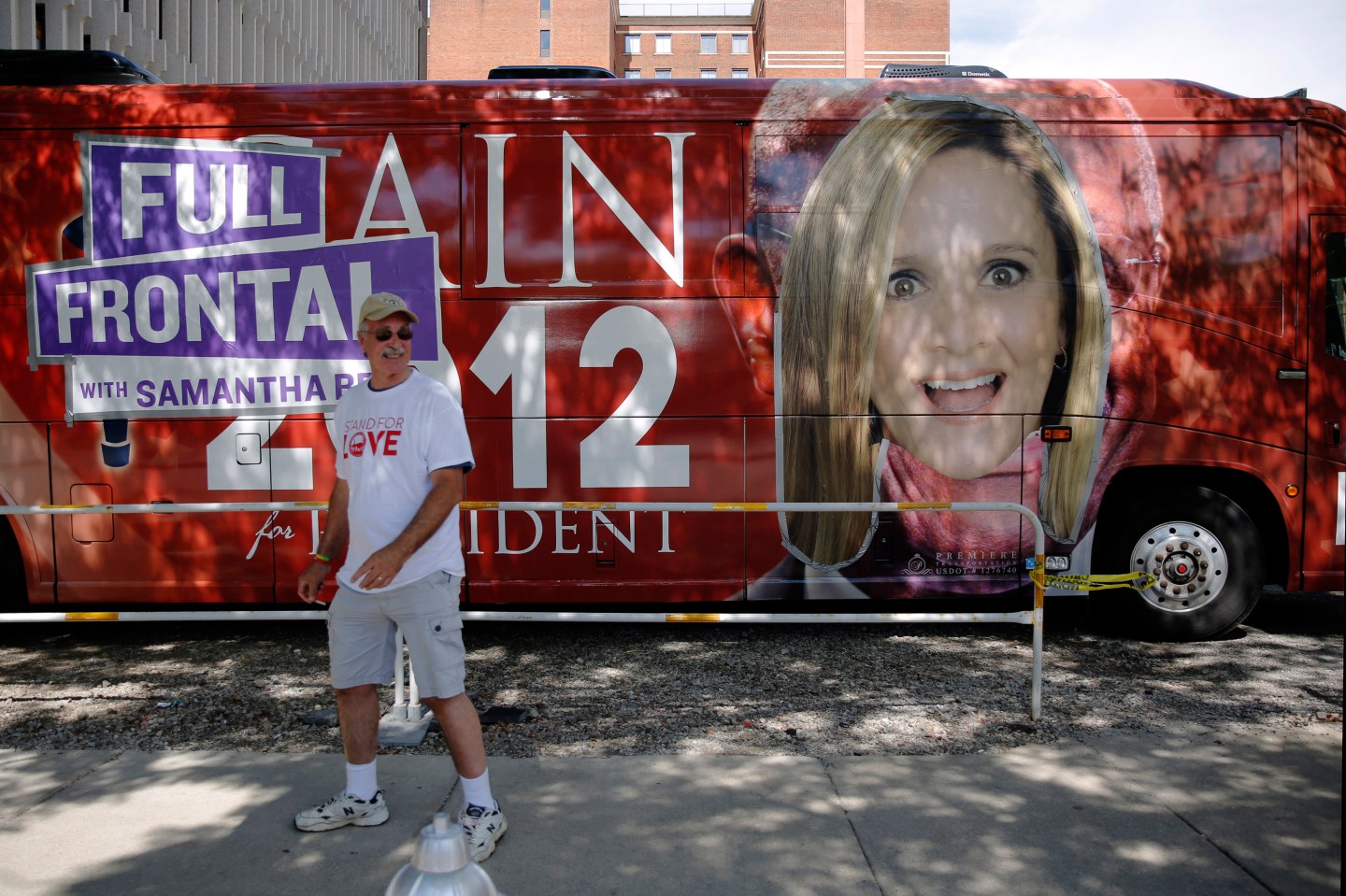 As Bee and her staff are making their way from New York to the RNC (on a bus, the failed 2012 Republican candidate Herman Cain’s bus, to be exact), this episode focused on stops in the swing state of Pennsylvania. Scandal’s Tony Goldwyn (who plays the president) drove the bus and was on hand to give Bee a pep talk.

After stopping in Altoona, Penn. at an establishment that claims to be America’s oldest gas station, Bee talked to one man who noted the state’s political divide while pointing out that there are Hillary Clinton supporters in that area. “You are a battleground state for the first time since Gettysburg. You are the belle of the ball. Let me spin you!” Bee told the young man, enthusiastically, before taking his hand and twirling him around.

At a county fair near the Mason-Dixon line though, a Full Frontal correspondent seemed to be overwhelmed by Donald Trump supporters, as interviewee after interviewee pledged their support for the GOP nominee over Clinton.

READ: Watch Samantha Bee Mock Pretty Much Everything about the RNC

One man who said he is voting for Trump said: “I don’t really see him as a racist, in my point of view, just because of people I know that consider themselves racist.” Even the one Democrat the show spoke to at the fair (an older woman whose husband said he votes Republican) said she refuses to vote for Clinton.

Meanwhile, some people at the fair took issue with the fact that Clinton is a woman. One man told Full Frontal that he didn’t think it would be a good idea to have a woman in the White House, and his female companion actually agreed with him wholeheartedly. The woman, who said she regularly faces misogyny in her job as a professional truck mechanic, still did not support the idea that a woman could hold her own in the White House.

“We don’t need a woman as the president,” she told Full Frontal. “We really don’t. We’re too dramatic!”

As the show neared Cleveland, Bee stopped in Beaver County, Penn. to talk to a local Republican politician about his reluctant support for Trump. State Representative Jim Christiana told Bee that, while he prefers a bipartisan approach to politics, he has to listen to his constituents and support Trump’s bid. She asked him o say Donald Trump’s name out loud without looking sad. It took him a few tries.

“So, we’re stuck with this s–t sandwich, let’s eat it,” Bee said, offering her own summary of Christiana’s comments.

“I think that’s a fair characterization,” he said.

The next episode of Full Frontal with Samantha Bee will air on TBS on Monday, July 25—the first day of the Democratic National Convention.