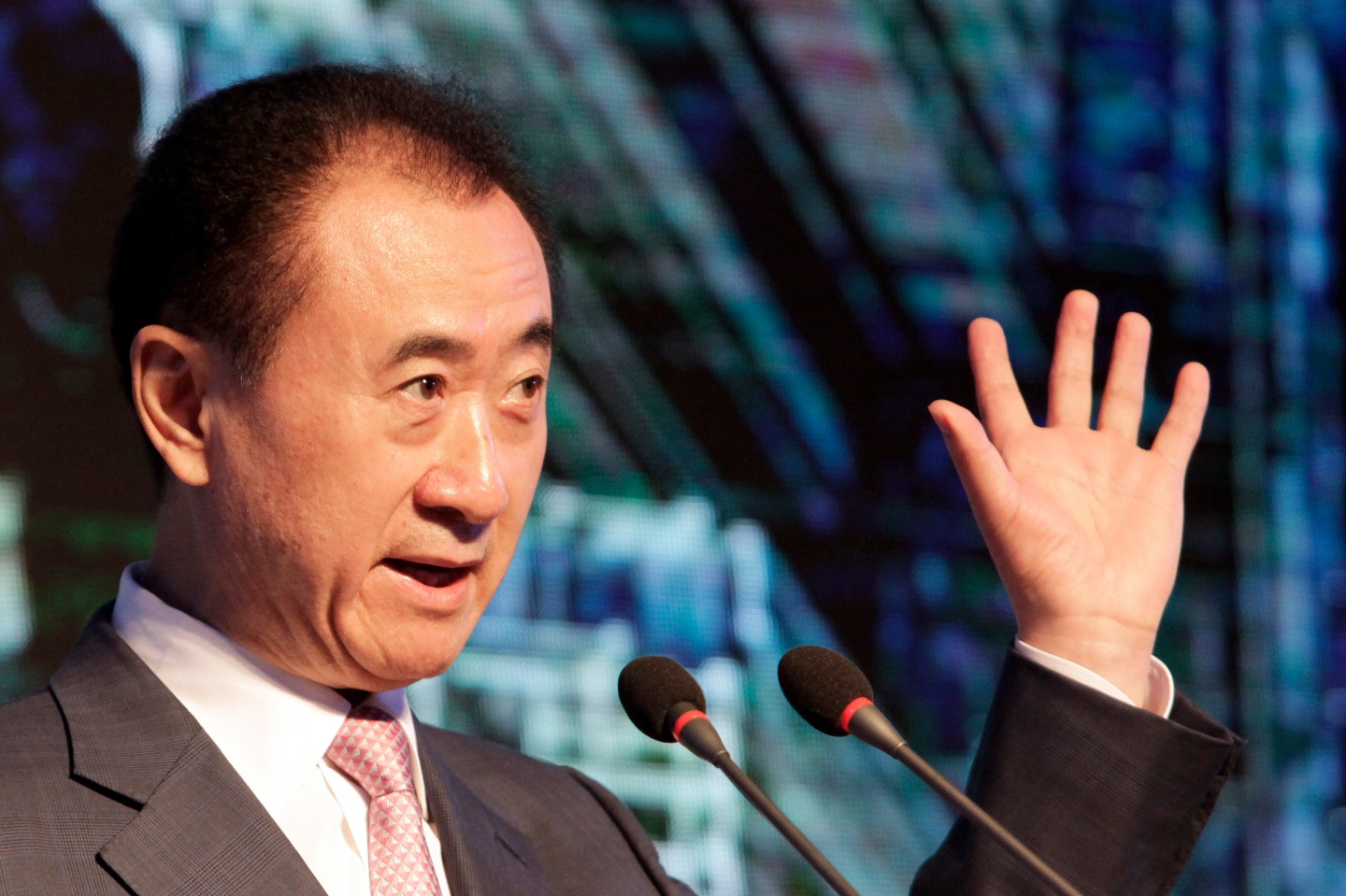 Wang Jianlin, left, chairman of Wanda Group, gestures as he speaks during a ceremony for the "China Cup" at the Sofitel Hotel in Beijing, Wednesday, July 13, 2016. Chinese real estate, entertainment and sports conglomerate Wanda says it will host an annual "China Cup" football tournament which will begin next year and feature four national teams. (AP Photo/Gerry Shih)
Photograph by Gerry Shih — AP

The first thing you should know about China’s richest man, Wang Jianlin, is that he’s not afraid to go big.

When his Dalian Wanda Group conglomerate opened its first “theme park city” this May, in the small Chinese city of Nanchang, it stretched across two square kilometers, doubling as China’s largest new tourist trap and ammo for Wang’s outsized ambitions for taking on Disney.

“The frenzy of Mickey Mouse and Donald Duck and the era of blindly following them have passed,” Wang told China’s CCTV the week before the Nanchang unveiling, in words that were brash even by the outspoken billionaire’s standards. Disney’s new Shanghai park was set to open the following month, but Wang said his park—along with 15 to 20 more that he plans to build—would keep it unprofitable for the next decade. Of Disney (DIS), he added, “They shouldn’t have entered China.”

Not that Wang himself has any trouble crossing borders. Two months later, in mid-July, Wanda was reported to be in the running for a 49% stake in Paramount Pictures, the Hollywood studio controlled by Viacom (VIAB) that dates back more than 100 years. The studio’s total valuation might run as high as $8 billion to $10 billion. If Wang were to win the bidding, it would be Asia’s biggest deal in Hollywood since Sony bought Columbia Pictures in the 1980s. And it would top Wang’s last Hollywood deal, which happened just six months ago. In January Wanda spent $3.5 billion on the movie production house Legendary Entertainment, the producer behind Jurassic World and the Hangover trilogy.

Even aside from its Hollywood and theme park aspirations, Wanda has been growing—and growing abroad—so fast that the world outside China has begun to pay attention. In 2015 alone, Wanda bought race organizer World Triathlon Corp.; Infront Sports & Media, which is selling Asian broadcasting rights to the next two soccer World Cups; and a stake in Spanish soccer club Atletico Madrid, for a total of $5 billion in overseas spending during the year. Back home, its sprawling web of malls and real estate generated enough cash for Wanda to make the Fortune Global 500 list for the first time this year. Wanda ranks No. 385 on the global list, with $27.4 billion in sales and $2.4 billion in profits in 2015, up 18.8% from $23 billion in 2014. If Wanda were an American company, it would rank just above Macy’s (M) in sales and not far behind entertainment giant Time Warner (TWX).

Wanda’s route to the list, however, has been anything but ordinary.

By Wanda’s own count, it is on its fourth company-wide transformation in less than three decades, having started as a small, state-owned real estate developer in the northeast coastal city of Dalian. Its ongoing rise reflects the growing clout of Wang, who has proven himself to be both an inventive businessman and a favored government friend in an economy where such ties are important. Now, he and Wanda are helping China spread its soft power abroad, through everything from stakes in foreign companies to constructions projects along the Thames in London and in downtown Chicago.

Wang, 61, was born to a father who served in Chairman Mao’s revolutionary army. Wang himself joined the People’s Liberation Army at the age of 15. But at 32, after tiring of his own officer track, he left for a government job. Wang eventually joined the Xigang Development Company, a residential developer in Dalian, a port city and trading hub near China’s border with North Korea.

Wang revived the failing state-owned builder after getting an army buddy’s help securing a loan. He changed the firm’s name from the lifeless Xigang to Wanda (which means “everything being accomplished”) after soliciting names through a newspaper contest. As China tested its first market reforms in the late 1980s and early 1990s, Wanda became one of the country’s first companies to issue shares; it privatized over the following years, with Wang becoming its largest shareholder.

Wanda expanded beyond Dalian and went national in the early 1990s, completing what became its first transformation. It then branched into commercial properties beginning in 2000, when the company’s shopping malls—called Wanda Plazas—began dotting the country. That was its second transformation; a third came as the company branched into tourist projects in the late 2000s. Wang, meanwhile, became a public figure whose slender-cut Western suits and widow’s peak gave the appearance of a leader straight from an executive MBA program, belying his relatively humble origins.

Wanda’s fourth transformation started last year, as the company began spreading its money around the world. Wang plans to flip Wanda’s focus from real estate to a few key domestic services sectors. By 2018, Wanda expects two-thirds of its sales to come from consumer services, up from about 40% last year, with an emphasis on tourism, entertainment and sports.

Those three sectors happen to be three main drivers of China’s transition into a consumer-led economy, and the government has declared that expanding them is a priority. The ruling State Council released a goal last October to nearly double the value of sports as a percentage of China’s GDP (currently 0.63%), which would make it a $775 billion sector by 2025.

“If you can leverage favorable policies, it’s good,” says Wang Xin, president of Greater China for consultancy Frost and Sullivan, of Wanda’s strategy. “In the long haul it’s not about leveraging policies alone, it’s about understanding future trends.”

Wanda Group did not make Wang available for an interview. But Liu Mingsheng, a spokesman, said of the company’s strategy, “The entire Chinese economy is going through transitions. The main objective is to achieve a state of economic growth that is based on domestic consumption. Wanda’s transition is consistent with China’s economic strategy.”

Wang’s rise accelerated in 2007, around the time that investors related to top government officials began taking stakes in his private firm. Until then, Wanda had only one other outside shareholder. Wanda was little known, and Wang not yet a billionaire. By last year he had passed Alibaba’s Jack Ma as China’s richest man, worth $34 billion, according to the Hurun Rich List, an annual ranking of China’s wealthiest individuals.

According to a 2015 investigation by Michael Forsythe in the New York Times, stakes in Wanda were offered to business partners and relatives of two then-members of the ruling Politburo, and later to the sister of China’s now president, Xi Jinping. In one example, an investor’s stakes multiplied from the $500,000 and $200,000 they paid to more than $900 million.

There is nothing illegal about the deals, and Wang has emphasized Wanda does not pay bribes. Wang also appears to have come through Xi’s anti-corruption drive unscathed. Wang responded to the Times report in the speech at Harvard last October, saying Xi’s sister and her husband, Deng Jiagui, sold their shares in the Dalian Commercial Properties unit before it went public in 2014. “Deng sold all the shares held by his investment company and fully exited at a low price point,” Wang said.

Still, the financial interactions underscore Wanda’s closeness to Chinese leaders and state institutions and leave the impression of Wang as a favored son. When Wanda bought the U.S. theater chain AMC in 2012, beginning a string of overseas acquisitions, a group of state banks including the government’s State Export-Import Bank helped finance the $2.6 billion deal, offering aid that private-sector companies seldom get.

“China still has a long way to go to build its own soft power,” wrote state-run nationalist tabloid Global Times earlier this year. “Companies like Wanda are pioneers on the road of China’s modernization and they deserve more encouragement.”

Wanda’s latest transition into consumer services brings it even closer to the government. As part of its move, Wanda wants to reduce the need to invest huge piles of its own money in real estate development. Although it plans to expand the number Wanda Plazas—it will open 55 this year, it says, for a total of around 180—more than 20 of those will be funded by outside investors who hold the land, usually governments or government-affiliated companies. Wanda will share the rental income, but will save its capital for projects like the Nanchang theme park, overseas acquisitions, and a movie studio Wanda is building in coastal Qingdao to rival those in Hollywood.

Earlier this year, Wang laid out Wanda’s goals for the next five years. By the end of 2020, he says, the company will reach $100 billion in sales and $10 billion in profits, and overseas sales will bring in 30% of the total. The company treats the figures almost as military orders. Managers head to daily management meetings and see numbers changing from green to yellow to red on their computers, depending on their progress toward these goals.

These are audacious figures, not least because Wanda’s sales are expected to fall this year amid a real estate slowdown that has forced many department stores in its malls to close. Wanda says overall sales will fall by 12% in 2016. Unless it goes on a hyperbolic growth streak starting in 2017, expanding sales more than 25% a year, the $100 billion goal looks out of reach.

But $100 billion by 2020 is probably not Wanda’s ultimate goal, anymore than keeping Shanghai Disneyland unprofitable for a decade is a real strategic objective.

Instead, Wang wants Wanda to become an international brand, with the same name recognition as Microsoft, Apple, and Walmart. “That’s my dream,” he said at Harvard. That aligns very closely with the Chinese government’s goal: a strong Chinese private-sector presence on the world’s corporate stage, where the country now is represented only by a handful of state-owned banks and energy giants, and a couple of tech companies.

Wang is a natural spokesman for a newly assertive China: he’s savvy, sanguine, and brash. At Harvard, he opined on how long it might take for Wanda to become a real international brand. “Speaking of when I could achieve it, maybe in 4 or 5 years the fastest,” he said. “Or 7 to 8 years in a slower pace.” If Wang does reach that goal, it will be both Wanda and China sharing the international stage.