What We Can Expect From Republican Convention Day 3 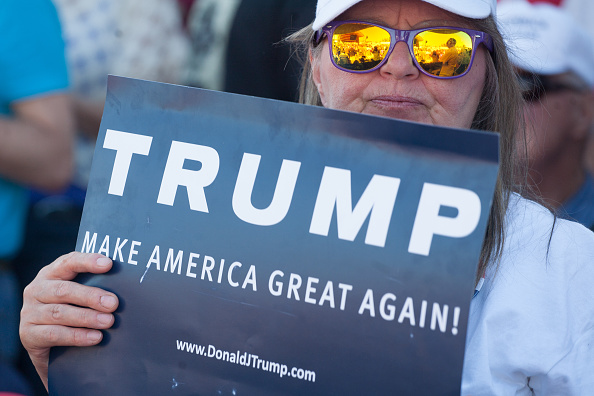 LYNDEN, WA - MAY 07: A supporter is seen during a Republican presidential candidate Donald Trump rally at the The Northwest Washington Fair and Event Center on May 7, 2016 in Lynden, Washington. Trump became the Republican presumptive nominee following his landslide win in Indiana on Tuesday. (Photo by Matt Mills McKnight/Getty Images)
Photography by Matt Mills McKnight – Getty Images

After two days of speeches, votes, and even a few floor fights, the third day of the Republican National Convention is upon us, and with it comes the first appearance of Indiana Gov. Mike Pence as the GOP’s official vice presidential nominee. The day will also focus on one of Donald Trump’s most prominent campaign talking points — the theme of the day is “Make America First Again.”

Speakers will include Wisconsin Gov. Scott Walker, who ran against Trump but has become a supporter, as well as former Speaker of the House New Gingrich and Trump’s son Eric. The night will end with Pence formally accepting the vice presidential nomination and will also include an appearance by Ted Cruz, the runner up in the Republican presidential nominating contest who has yet to formally endorse Trump.

The theme of the night suggests that foreign policy and trade will be important topics of conversation. Both are areas where Trump has suggested that previous administrations, both Republican and Democrat, have failed to protect America’s interests. That sort of nationalist sentiment has resonated with many working class white voters, a group Trump needs to turn out in big numbers to the polls to defeat Hillary Clinton in November’s general election.

And while “America First” is the general theme, if the first two nights are any indication, speakers will also find time to slam Clinton on Benghazi, e-mail servers, and just about anything else they can think of, regardless of its relevance.