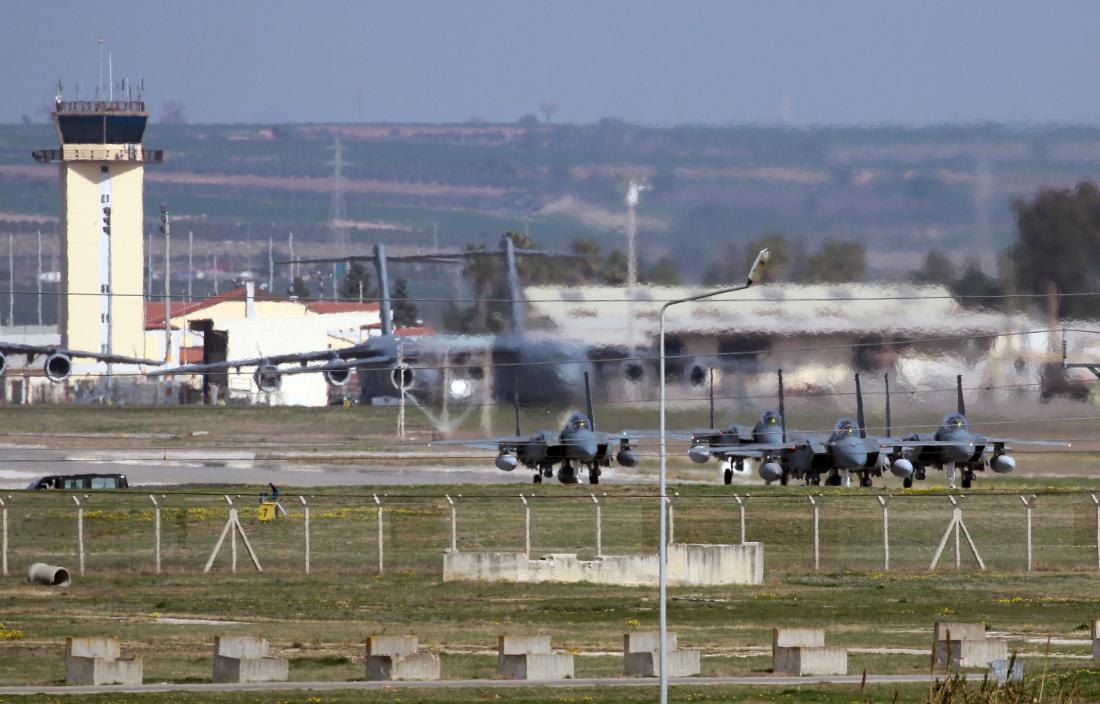 Saudi jet fighters parked at Incirlik Air Base near Adana, southern Turkey, Friday, Feb. 26, 2016. Ibrahim Kalin, a top aide to Turkey’s President Recep Tayyip Erdogan said Saudi military aircraft that will join the fight against Islamic State militia in Syria have begun arriving at a southern Turkish air base. The Saudi deployment comes as a U.S. and Russia-engineered cease-fire is due to take effect at midnight on Friday, but the truce agreement does not cover operations against the IS, designated as a terrorist group by the U.N. Security Council. (AP Photo)
AP AP

The United States-led military coalition fighting Islamic State militants resumed operations at a key Turkish base used for airstrikes in Iraq and Syria on Sunday, ending a shutdown resulting from airspace restrictions imposed in aftermath of a failed and bloody military coup attempt on Friday night.

Pentagon Press secretary Peter Cook said in a tweet that air operations had resumed “after close coordination with our Turkish allies.” Turkey’s Incirlik air base is considered a key nexus in the campaign against Islamic State fighters who control much of Iraq and Syria.

UPDATE: After close coordination with our Turkish allies, counter-ISIL coalition air operations in Turkey have resumed.

The disruption of U.S. air operations underscored the global reverberations of the attempt to depose the elected government led by President Recep Tayyip Erdogan on Friday. The precautions also signal the continuing sense of unease in NATO ally Turkey as the government continues to reassert control over the country.

Separately, eleven Turkish military personnel were arrested at the base for alleged complicity in the insurrection, a Turkish official said on Sunday.

A spokesperson for the Turkish president’s office said security measures had been taken at Incirlik air base in order to prevent a repeat of the lethal violence that unfolded on Friday night after units of the military attempted to seize power. Military forces deployed tanks in the streets of the capital, scrambled fighter jets, and an explosion struck the parliament building in Ankara.

“It’s a temporary measure out of consideration of the safety of our citizens,” said Dogan Eskinat, a spokesperson for the Turkish presidency, speaking hours before the announcement that U.S. operations had resumed. Referring to the rouge military units, he said, “They essentially fired at crowds and bombed different locations.”

“We’re looking forward to continuing our operations against ISIS along with the United States and other coalition allies as soon as we’re sure that the air base won’t be used in future attacks against civilians as happened on Friday night, or government buildings like the parliament,” he told TIME via phone.

Eleven soldiers, including the Turkish base commander Gen. Bekir Ercan Van, and one police officer were arrested for “complicity in Friday’s coup attempt,” a Turkish official said on Saturday.

The Pentagon confirmed on Saturday that all operations at the base had been put to a halt. “U.S. officials are working with the Turks to resume air operations there as soon as possible,” said Pentagon press secretary Peter Cook, in a statement quoted by The Guardian. Cook added that the U.S. air forces central command is “adjusting flight operations in the counter-[ISIS] campaign to minimize any effects on the campaign.”

Parts of the air force played a central role in the attempted putsch against the elected government on Friday. One helicopter commandeered by coup plotters was shot down. Some officials also attributed a massive explosion at the parliament building in Ankara to an air attack.

After repelling the attempted military takeover, Erdogan’s government moved aggressively to round up alleged participants in the coup attempt, arresting thousands of military personnel and suspending judges and prosecutors. It remains unclear whether there are any coup plotters or participants remain at large.

“It’s an ongoing process, obviously. There are a few people who are unaccounted for,” said Eskinat, who spoke prior to the announcement of the arrest of the officers at Incirlik.

Turkey granted the U.S. permission to use the base in sorties against ISIS in July 2015 following a deadly bombing in a Turkish border town that the government blamed on ISIS. The Turkish government had been criticized in the past for not doing enough to combat ISIS. Since 2011, Turkey’s top policy priority in Syria has been to support rebels fighting the regime of president Bashar al-Assad, a stance that has put Turkey at odds with the Obama administration, which prioritizes the battle against ISIS.

In another of the coup attempt’s ripple effect on American-Turkish relations, Erdogan on Saturday demanded that the U.S. extradite influential cleric Fethullah Gulen, who the government blames for instigating the coup attempt. Gulen lives in Pennsylvania, but his movement includes numerous followers inside Turkey and an international network of charities. Secretary of State John Kerry said the U.S. would consider Turkey’s request if it could present evidence of wrongdoing by Gulen.

Earlier on Saturday Turkish Prime Minister Binali Yildirim said that any country that stood by Gulen would be at war with Turkey, according to Reuters. The government accuses Gulen of setting up a network of its followers within the Turkish state.