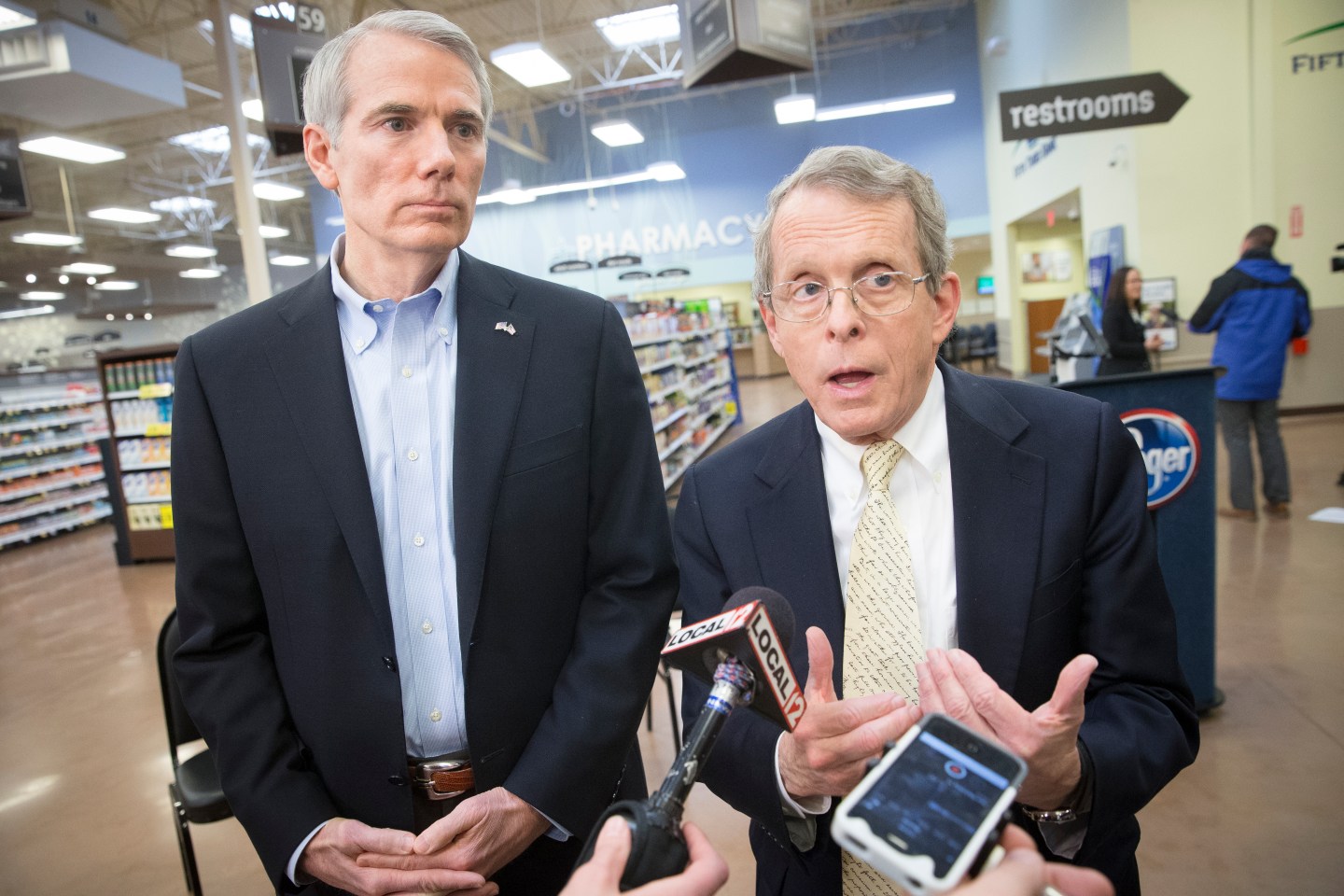 Ohio Attorney General Mike DeWine, right, and Sen. Rob Portman, R-Ohio, left, speak to the media during a news conference at the Oakley Kroger Marketplace store to announce the supermarket chain's decision to offer the opioid overdose reversal medicine Naloxone without a prescription, Friday, Feb. 12, 2016, in Cincinnati. Naloxone is routinely carried by fire-rescue crews, which use it thousands of times a year in Ohio to revive overdose victims. Kroger, based in Cincinnati, has 2,774 supermarkets and multi-department stores in 35 states and the District of Columbia. (AP Photo/John Minchillo)
John Minchillo — AP

After more than a year of trying, Congress has finally passed significant legislation to combat America’s opioid epidemic. But at the moment, it’s more like a list of suggestions.

The Comprehensive Addiction and Recovery Act sailed through the Senate on a 92-2 vote Wednesday after a similarly overwhelming show of support in the House of Representatives last week, and will now head to President Obama’s desk for his signature. The law seeks to enhance community resources to tackle an ongoing opioid overdose scourge which claimed the lives of more than 28,000 Americans in 2014. Its provisions include: expanding the availability of the opioid antidote naloxone to police and first-responders; encouraging states to seek alternatives to jail time for addicts; allowing more medical professionals to administer medications that can fight addiction; and expanding prescription drug monitoring programs to identify patients at risk of addiction, among other measures.

There’s just one problem: the bill doesn’t actually fund any of these programs. Obama has repeatedly called for $1.1 billion in funding for anti-opioid efforts, but congressional Republicans refused to include the money in the bill. The GOP says that the law will be funded through a separate appropriations process instead.

“We continue to believe this bill falls far short,” Obama said in a statement confirming that he’ll approve the legislation. “That’s why the Administration strongly supported Democratic efforts to add $920 million in funding for states to provide treatment for Americans struggling with opioid addiction… While the President will sign this bill once it reaches his desk because some action is better than none, he won’t stop fighting to secure the resources this public health crisis demands.”

The White House has rolled out a series of initiatives to combat opioid painkiller and heroin addiction. Most recently, the administration proposed significantly expanding the number of prescriptions for the addiction-fighting medicine buprenorphine that doctors can prescribe. But officials also noted that only Congress has the power to truly expand access to these programs.

Anti-addiction advocacy groups hailed the new law’s passage while urging Congress to quickly move to the appropriations process, which can be messy. Senate Democrats subsequently introduced legislation that would apportion $600 million in emergency funding for the efforts.

Republican Senator Rob Portman of Ohio, one of the bill’s main champions, said that he was confident that funding for the programs would ultimately be passed, according to the New York Times. “This is an authorization bill,” said Portman. “It authorizes more money than we’ve ever even dreamed about for opioids.”