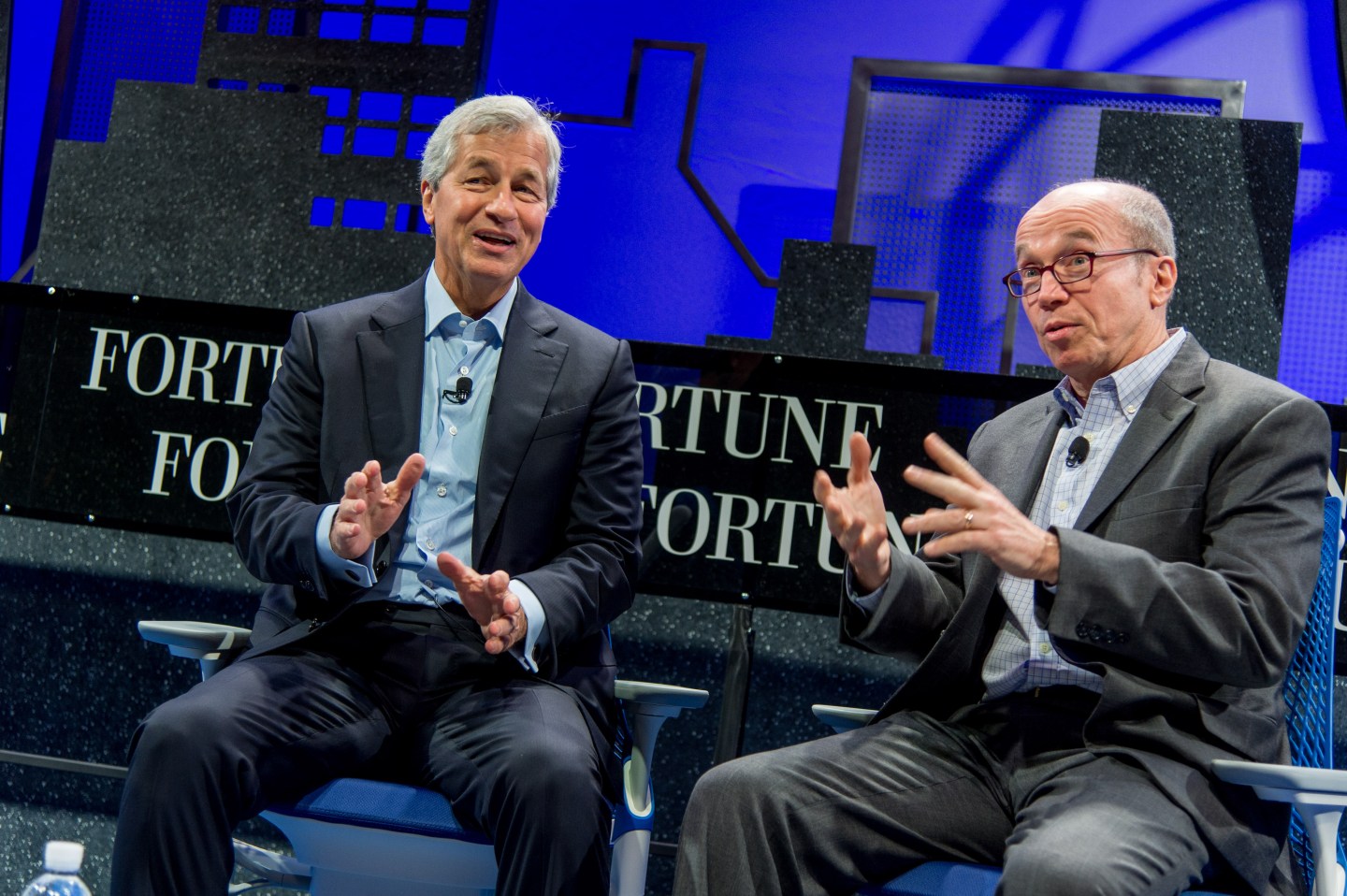 FORTUNE GLOBAL FORUM Wednesday, November 4th, 2015 2015 FORTUNE GLOBAL FORUM San Francisco, CA, USA 11:25 am-12:00 noon THE DECADE AHEAD Since ascending to the CEO job at JPMorgan Chase & Co. ten years ago, Jamie Dimon has powered through the financial crisis and grown the company’s stock by more than 60%at a time when the S&P Financials index declined by more than 20%. In this closing session, he’ll discuss lessons learned along the way and how banking has changed since the financial crisis Speaker: Jamie Dimon, Chairman and CEO, JPMorgan Chase & Co. Interviewer: Alan Murray, Fortune Photograph by Stuart Isett/Fortune Global Forum
Photograph by Stuart Isett Stuart Isett — Fortune Global Forum

Chase is on a hiring spree.

On Thursday, J.P. Morgan Chase (JPM) announced that it had added 2,626 positions in the past past three months alone. That’s on top of the more than 2,800 jobs the bank added in the first three months of the year. The hires put J.P. Morgan’s head count above 240,000 for the first time in more than a year and a half. It also comes after three years of job cuts at the firm.

It may also be a sign that J.P. Morgan is in better shape than its rivals. Goldman Sachs (GS) cut 3,000 jobs in the first three months of the year. The firm recently notified New York City that it has plans to layoff another nearly 400 workers. Bank of America (BAC), too, has been cutting back. Earlier this week, the Charlotte-based bank said it was going to cut an addition 3,500 positions. The bank reduced its headcount by 10,000 last year.

And J.P. Morgan is not just adding to its workforce. It’s handing out raises as well. Earlier this week, the bank announced that it was going to raise the minimum wages of bank branch employees to as much as $16.50 an hour, from $10.15 and hour. The wages will impact the pay of 18,000 employees.

On a call with journalists, CFO Marianne Lake said that most of the hirers would be in its branch banking business, adding tellers and customers service personal. But the bank said it is also ramping up it technology staff to compete with the growing number of so-called fintech companies that are looking to break into the banking banking business. The Wall Street Journal recently reported that J.P. Morgan was looking to recruit people for its a unit it calls its Blockchain Center of Execellence unit at the bank, focused on the technology that powers cryptocurrency Bitcoin.

Some critics say that while J.P. Morgan’s profits look to be improving, it should still be holding off on hiring, because the bank’s profitability is not where it should be. Compensation is typically the biggest expense in the banking business, particularly on Wall Street.

Part of the reason J.P. Morgan’s earnings were better than expected in the second quarter was that the bank booked an accounting gain from lower than expected legal expenses. That’s not likely to occur again. All in, the banks return on equity was 13%. That’s much lower than the roughly 20% it was a few years ago, before the financial crisis. Still its much higher than many rivals. Goldman Sachs and Morgan Stanley have recently had ROE’s in the single digits.

The one place where J.P. Morgan may have further cuts is in London. The bank had estimated that it would more, or eliminate, 4,000 positions in London if the U.K. was to vote to leave the European Union. The bank has since said it wasn’t sure how many employees it would move. On Thursday’s call with journalists, Lake said that no determination had been made about the fate of its U.K. based workers.

Jamie Dimon, who appeared to have a cold, didn’t talk, except to say, with a extremely hoarse voice, that the bank is still committed to Europe.