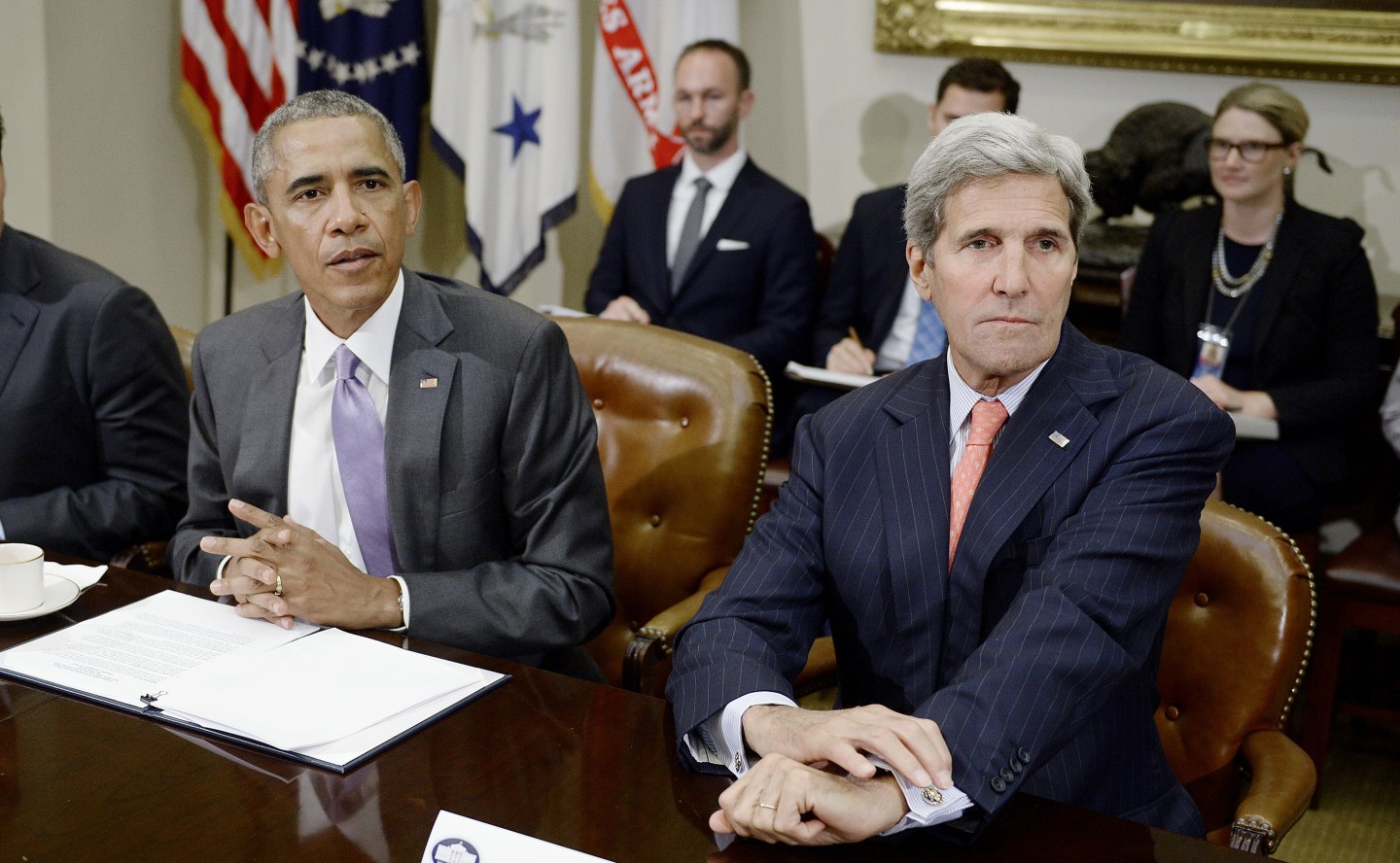 WASHINGTON, DC - SEPTEMBER 10: U.S President Barack Obama and Secretary of State John Kerry (R) meet with a small group of veterans and Gold Star Mothers to discuss the Iran nuclear deal in the Roosevelt Room of the White House September 10, 2015 in Washington, DC. Groups supporting and against the nuclear deal with Iran to lift sanctions have made their voices heard this week. (Photo by Olivier Douliery-Pool/Getty Images)
Photo by Olivier Douliery-Pool/Getty Images

Here are some of the major points of contention in last year’s seven-nation Iran nuclear deal, and who is getting their way:

By its own metrics, the Obama administration has achieved its main objective: cutting off Iran’s four pathways to a bomb. The U.N.’s nuclear agency has confirmed that Tehran has taken offline thousands of centrifuges used to enrich uranium, a potential bomb-making material. The Iranians have disabled a heavy water plant that would have produced plutonium usable in a weapon. They’ve opened their supply chain to far greater scrutiny. An underground enrichment facility near Fordo remains open, contrary to U.S. wishes, but under strict limits. All told, Iran is at least a year away from developing a nuclear weapon — America’s overarching criterion.

Compliance also has yielded benefits for Iran, too, giving it newfound credibility as an international player. Many nuclear restrictions begin coming off in the middle of next decade.

Winner: Thus far, a strategic victory for the United States.

Missiles And Other Conventional Weapons

The U.S. bragged after the deal was signed that it had secured two key last-minute concessions: Prolonging the United Nations ban on Iranian missile development by eight years and the ban on Iranian arms transfer by five years. Iran almost immediately flaunted both restrictions. It has persisted in sending weapons and fighters to the Syrian government and Yemeni rebels in their respective civil wars. Its missiles have gravely concerned America’s Arab allies and Israel. And Washington’s response has been limited. It has issued some new, unilateral sanctions. But when it broached the subject of missiles with other U.N. Security Council members, the U.S. found them divided on whether the bans any longer applied. They proved unwilling to support any global punishment in response.

Iran wanted relief from international economic pressure to coincide with January’s implementation of the nuclear accord. U.S. and other negotiators agreed. More by accident than design, however, it hasn’t quite worked out. Iran immediately announced a lucrative deal with European plane maker Airbus, but most international banks and manufacturers have stayed away, fearful of incurring U.S. prosecution or fines. While the Iranians recouped some $100 billion in frozen assets overseas, the U.S. says they’ve only brought a fraction of that home. A cash shortfall has prompted Iranian threats of reneging on the nuclear deal, leading top U.S. officials to lobby for greater economic investment in Iran. Another breakthrough recently emerged: A deal between Boeing (BA) and Iran Air that could be worth $25 billion. More quietly, Iran’s oil sector is booming again.

Winner: The U.S., for almost accidentally preserving much of its financial sanctions against Iran, but the ground may be shifting.

Both sides raised the prospect of hugely consequential aftereffects from the deal. Iran has won a seat at the table for peace mediation efforts on Syria’s civil war, while continuing to send weapons and fighters to help President Bashar Assad’s government. In Iraq, both sides are staying out of each other’s way as the Iranians pressure the Islamic State on the ground and a U.S.-led coalition pummels the extremist group by air. In Yemen’s conflict, the U.S. has exposed Iran’s role in support of Shiite rebels. But both sides say they back a peace process that would preserve some of Iran’s interests. President Hassan Rouhani and Iranian leaders are flying around Asia and Europe without the stigma attached to predecessors. Secretary of State John Kerry and Iranian Foreign Minister Mohammad Javad Zarif are conversing and meeting regularly.

Winner: Iran for ending its isolation, even as the U.S. also is finding advantages to the new geopolitical reality.