Theresa May Set to Become U.K. Prime Minister As Last Rival Pulls out 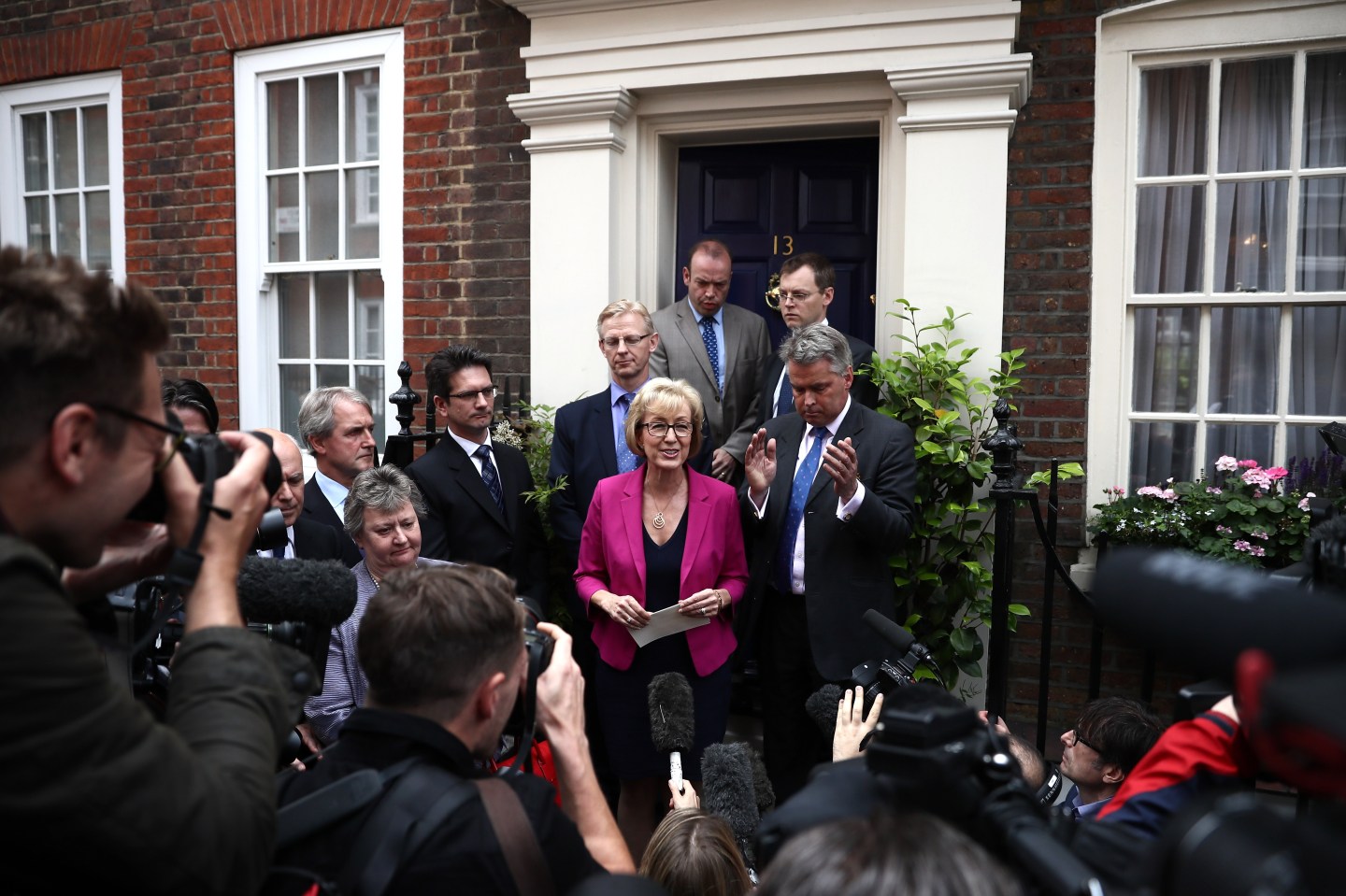 LONDON, ENGLAND - JULY 11: Andrea Leadsom MP speaks to the media as she announces her withdrawal from the Conservative leadership race at Cowley Street race on July 11, 2016 in London, England. Leadsom has pulled out of the Conservative leadership race to be Prime Minister of the United Kingdom, and will now offer her full support to Theresa May MP. (Photo by Carl Court/Getty Images)
Carl Court Getty Images

And then there was one.

The race to be the next Prime Minister of the U.K. appears to be all over bar the shouting, after Energy Minister Andrea Leadsom pulled out and endorsed her last remaining rival, Home Secretary Theresa May.

In a statement to reporters on the doorstep of her London home, Leadsom, said she didn’t command enough support among Conservative lawmakers to deliver the strong and stable government that the U.K. needs in the wake of the June 23rd referendum vote to leave the European Union.

U.K. financial markets have taken a battering in the two weeks since as uncertainty over the country’s future course spiralled, with the pound falling to a 31-year low and sharp drops in consumer confidence and housing transactions. Shares in the country’s largest banks have plummeted and a number of U.K. open-ended real estate funds have either suspended trading or sharply written down their asset values been sharply written down.

Graham Brady, the chairman of the Conservative Party’s influential “1922 Committee”, said in a separate statement that Theresa May was now “the only remaining candidate” and suggested that her confirmation as the new party leader was a formality, saying that the party won’t reopen the leadership contest.

Under the party’s rules, the 330 members of parliament narrowed down an initial field of five candidates to two last week. The party’s nationwide membership was then supposed to decide between the two by early September.

Legally, May faces no obstacles to forming her own cabinet as soon as she is confirmed in the post of Prime Minister by the Queen. May has indicated that she would like to avoid calling a new general election if she succeeds. However, there is intense debate over the lack of legitimacy this might have in the eyes of the public, given that she didn’t lead the party at the last election, and didn’t back the Leave campaign in the EU referendum.

Leadsom’s decision came after a weekend in which she attracted heavy criticism by appearing to claim in an interview that being a mother made her better qualified to be Prime Minister than the childless Mrs. May. That came on top of criticism that she had exaggerated her achievements and responsibilities in her previous career in finance.