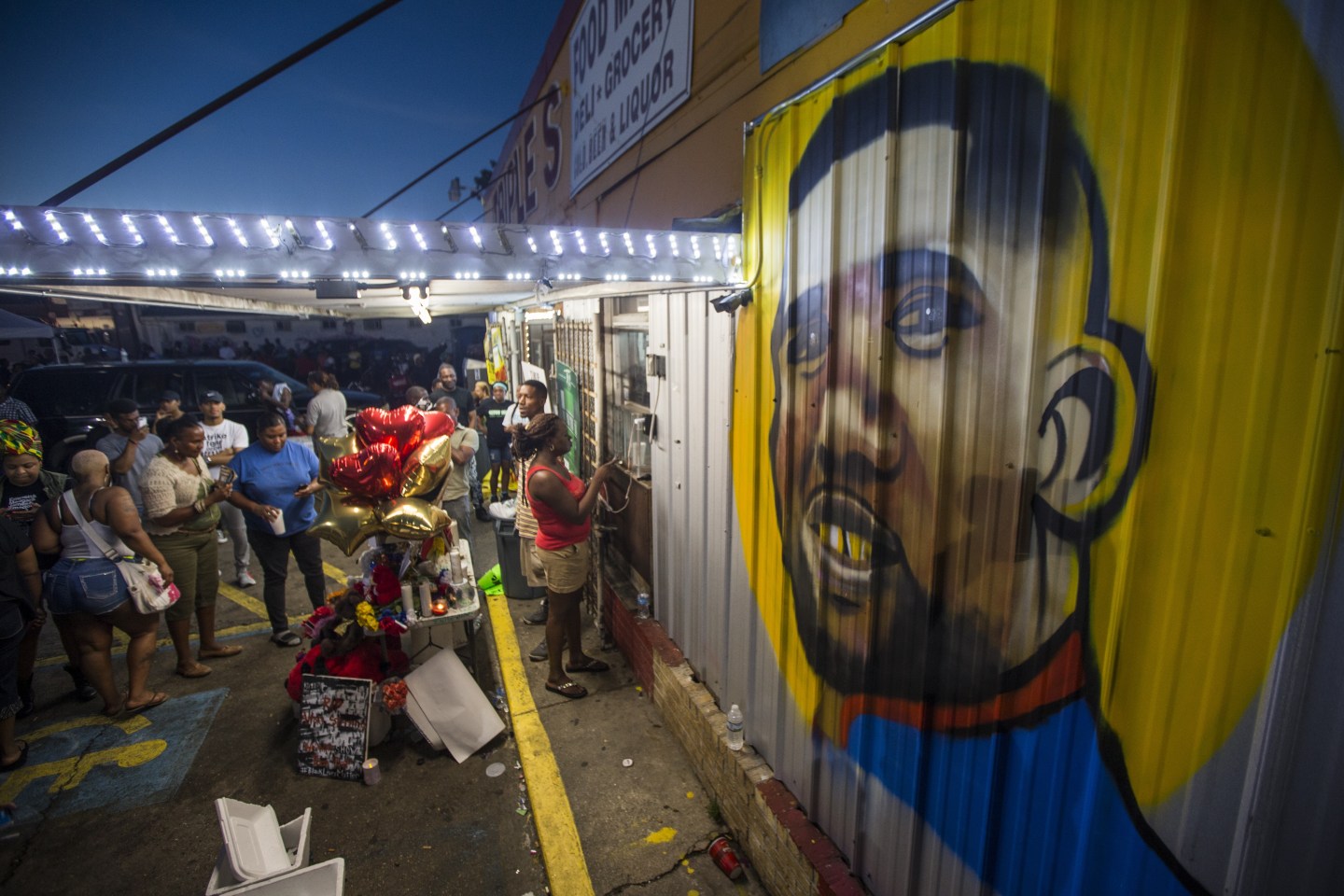 BATON ROUGE, LA -JULY 06: protesters gather in front of a mural painted on the wall of the convenience store where Alton Sterling was shot and killed, July 6, 2016 in Baton Rouge, Louisiana. Sterling was shot by a police officer in front of the Triple S Food Mart in Baton Rouge on Tuesday, July 5, leading the Department of Justice to open a civil rights investigation. (Photo by Mark Wallheiser/Getty Images)
Photography by Mark Wallheiser Getty Images

The concept of inclusion, the idea that people from a variety of backgrounds can “bring their whole selves to work and thrive,” is a lofty and beautiful one. But when a traumatic event occurs– like the most recent two police shootings of black men — that means employees are going to be affected emotionally.

And as horrifying as these events may be — and things have been particularly horrifying lately — that presents employers an opportunity to incorporate compassion into their management systems.

First some background. On Wednesday, Philandro Castile was pulled over for a routine traffic stop in Falcon Heights, Minnesota, and was shot in his seat in front of his girlfriend and her four-year-old daughter. The encounter was live-streamed on Facebook by his distraught partner. Things were already tense. On Tuesday night, Alton Sterling, a father of five, was pinned down and shot by two police officers in Baton Rouge, Louisiana, setting off a wave of protests and triggering a federal investigation.

Graphic video and images of the two shootings have been widely circulated and discussed online.

Now imagine a young associate watches a video of one of the shootings, shares it on Twitter, expresses fear and outrage, gets attacked by a troll, then walks into a staff meeting.

“Maybe she’s upset, even visibly shaken,” says Dnika J. Travis, the vice president, Women of Color Research & Center Leader, Catalyst Research Center for Corporate Practice. “And she decides to sit in silence, unable to participate in the meeting, because she’s afraid her feelings will be dismissed.” How will her colleagues or manager interpret her silence? Is she not a team player? Are aspects of her job suddenly worrisome – for example, driving to visit accounts in heavily policed neighborhoods?

Things get complicated when the event is a highly-charged one, like those involving systemic racism and state violence. “This isn’t a natural disaster, where everyone is aligned right away. This is difficult stuff to process,” says Alison Davis-Blake, professor of business and former dean at the Ross School of Business at the University of Michigan. “But a compassionate organization cultivates a sense of empathy for those who are suffering. And the first thing is for leaders to be present, talking, listening, and acknowledging that something specific has happened, and that some people may have concerns.”

Research shows that “psychological safety”– feeling comfortable enough to talk about difficult issues – plays a huge role in facilitating these conversations, says Travis. But it’s the organization’s job to define what safety really means. “It’s going to mean different things to different employees. Does it mean I can say whatever I want without being challenged?” Now is the time to check-in with managers, to make sure they are prepared to handle the difficult conversations that may need to happen, either one-on-one or in a team setting. “This is not easy,” she warns. “Expect to be stretched.” And expect that the systems you have in place now – to handle disputes, to run meetings, or to survey employees on their needs – may need an upgrade.

But Davis-Blake cautions against rushing past the painful parts, particularly if you discover that your organization is not as prepared to deal with a diverse workforce as you might have hoped. “Leaders make the mistake of wanting to put a band-aid on things, then trying to get everyone right back to work,” she says. Instead, think of it as a time to grow as an organization. “A leader needs to ask themselves, ‘how would I like us to be different and better as we heal from this trauma?’ It’s a simple idea, but very hard to do.”

Need more guidance? The University of Michigan’s Center for Positive Organizations was created after the attacks of September 11th, specifically to help organizations respond to challenge and pain in more inclusive and effective ways. It’s a terrific resource.