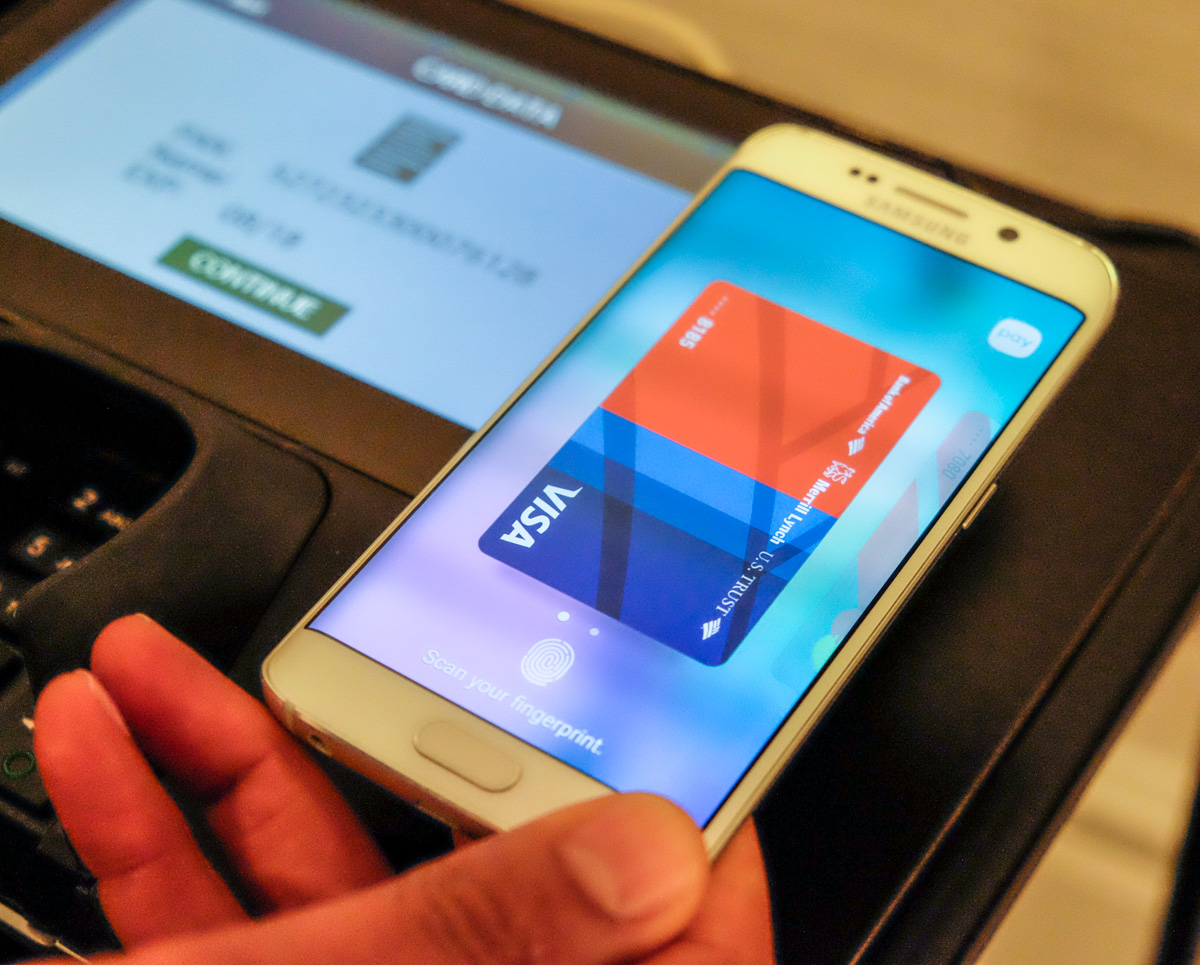 Smartphone leader Samsung Electronics has for years been a spectator as Apple built a services “ecosystem” supporting its products. But now, as the two develop the market for mobile payments, the Korean tech giant is taking the fight to its U.S. archrival.

For Apple (AAPL), offering users the ability to tap their iPhones on sales terminals to buy a coffee, snack, or train ticket is a fresh revenue stream, like its iTunes music and entertainment service. The banks it works with cough up a small charge for each transaction—reportedly 0.15% in the United States.

Samsung (SSNLF), which has trailed behind its competitors in software and services, is taking a different path.

It is not seeking fees from its financial partners, viewing Samsung Pay as an engine to drive sales of phones and other devices.

“We’re a hardware company, and at the end of the day I think what we’re trying to do is get people who hold (one of) our phones and use it…to just love it more,” Elle Kim, global vice president of Samsung Pay, told Reuters in Sydney.

It is early days yet; the companies’ payment services have been direct competitors in the United States only since last September, China for four months, and Australia and Singapore for just a week or two. Apple Pay is also available in Britain and Canada, and Samsung Pay in South Korea and Spain.

Alibaba and Tencent have ambitions to develop their business outside China, too, but have yet to make significant inroads.

Samsung said on Tuesday its payments service had processed more than $1 billion in South Korea since its August launch—still only a fraction of the country’s $500 billion-plus credit card transactions last year.

There is no reason why banks can’t work with both rivals, since these are not exclusive technologies, but Samsung’s approach could help it scale up quickly with banking partners.

“Apple wants more control, and the negotiations are more complex,” said Christophe Uzureau, vice president of Digital Payment Strategies at Gartner. “Samsung is more flexible, so from a bank’s perspective there is an ability to have more flexible terms and conditions.”

The two have partnerships with a long list of banks and credit card companies in the United States and have many of the same partners in Singapore.

Samsung Pay launched in Australia last Wednesday with partners American Express (AXP) and Citibank. Apple Pay has also teamed up with Amex there and with Australia and New Zealand Bank (ANZ), so far the only major local bank to offer either service to its customers.

Australia’s large banks all have their own mobile payment services, though National Australia Bank said it welcomed strategic partnerships in this space, and Westpac said it has had discussions with a range of wallet providers and was assessing its options.

Samsung Pay also has an extra technological weapon in its armory.

Apple Pay only works with sales terminals equipped with Near Field Communications (NFC) technology, but phones compatible with Samsung Pay use both NFC and the older technology Magnetic Secure Transmission (MST), which mimics the magnetic strip on traditional payment cards.

“Mobile payments need at the end of the day to make it available as much as where plastic is acceptable. If the mobile payments cannot match it, it’s very difficult for someone to replace their wallet with a mobile,” Ko said.

Both Apple and Samsung, which sell 40% of global smartphones, are investing in mobile payment in part to defend their premium product pricing as the industry’s growth slows and Chinese rivals bring down average selling prices.

Samsung plans to offer the service on its virtual reality headset, and hopes that will enhance sales of the novel device.

“Both companies will be looking to their payment solutions to drive loyalty,” said Foad Fadaghi, managing director of technology researcher Telsyte.

Apple has been able to drive loyalty through its unique ecosystem and proprietary operating software, while Samsung, like many makers, runs its phones on Google’s Android software, making it more difficult to differentiate its offering.

“It’s more important for Samsung to have services like Samsung Pay so that it can edge out its competitors which are numerous and many in the Android space, particularly the Chinese vendors,” Fodaghi said.