Disney Is Bringing Olaf and Other ‘Frozen’ Characters to Its Park 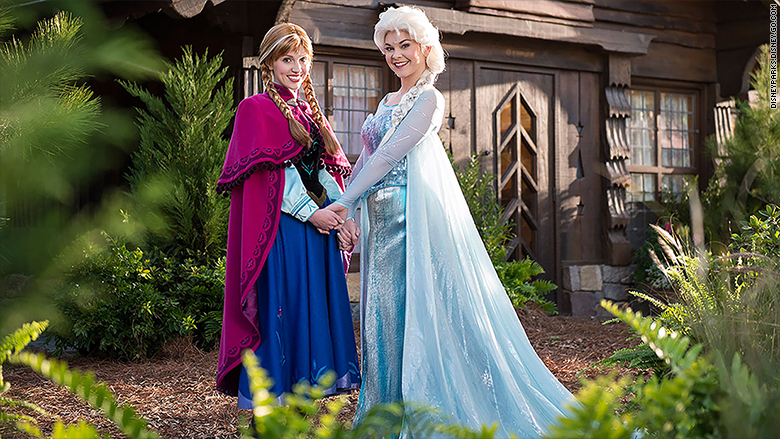 Since launching in November 2013, Disney’s Frozen movie remains hot. After shattering box office records with over $1.2 billion on its way to the all-time pinnacle of animated movies, Disney has been able to market everything from video games to t-shirts to an upcoming line of Playmation toys aimed at young girls.

Now, beginning on June 21, fans will be able to step into the kingdom of Arendelle at the Norway Pavilion in Epcot, part of the Walt Disney World Resort in Orlando.

This is part of a bigger push to integrate Disney’s biggest brands and franchises, such as Star Wars and Marvel, into the company’s theme parks, cruise ships, and resorts.

Disney’s first Latin princess (Princess Elena of Avalor) who debuts in the new Disney Channel animated TV series, Elena of Avalor this June, also will reside at the Magic Kingdom this August. (She’ll debut at Disney California Adventure this fall.)

All of these tie-ins are an effort to boost attendance at the parks. Revenue for Disney’s entertainment unit generated $2.1 billion in the second quarter, a 22% rise, thanks to hits such as Star Wars: The Force Awakens and Zootopia. And those numbers don’t include recent blockbusters The Jungle Book, Captain America: Civil War, and Finding Dory.

Banking on bringing in more visitors

Disney’s parks and resorts unit generated $3.9 billion in the second quarter, a 4% gain. The parks saw a 10% rise in income ($624 million) thanks to higher ticket prices, including the new peak hours pricing, and customers spending more on food, beverages, and merchandise.

But Disney CEO Bob Iger told analysts during a second-quarter conference call that park attendance was modestly down as a result of the new pricing strategy that implements surge pricing for tickets. For the first time in five years, earnings per share missed analysts’ forecasts.

S&P Capital analyst Tuna Amobi expects Frozen Ever After to have a meaningful impact on Epcot attendance in particular, and to Disney World overall.

Frozen Ever After has new tech

Composers Bobby Lopez and Kristen Anderson-Lopez created new lyrics to the classic Frozen film songs, which you likely have memorized if there are little girls in your house. And the entire cast of the film, including Kristen Bell (Anna), Idina Menzel (Elsa), and Josh Gad (Olaf), have returned to provide dialogue and songs for this new ride. (Bell and Menzel are also confirmed for the movie sequel.)

According to Wyatt Winter, project manager and producer with Walt Disney Imagineering, the ride’s story takes place after the first film. “It’s really a happily ever after story,” Winter says. “Every year Elsa has frozen over the kingdom as part of the ‘Summer Snow Day’ celebration.”

What makes the four-minute ride unusual is that it employs advanced projector technology behind characters such as Queen Elsa, Princess Anna, Kristoff, Olaf, Sven, and Marshmallow to have more lifelike animation as the log boats travel through Arendelle.

“We have taken the audio animatronics and pushed it to the next level, so you’ll see the characters coming to life in this Frozen Ever After,” Winter says.

The new opening comes in the wake of the tragic death of a two-year-old boy by an alligator outside of Disney’s Grand Floridian Hotel, which overlooks the Magic Kingdom. Disney has since changed its signs to warn of alligators.