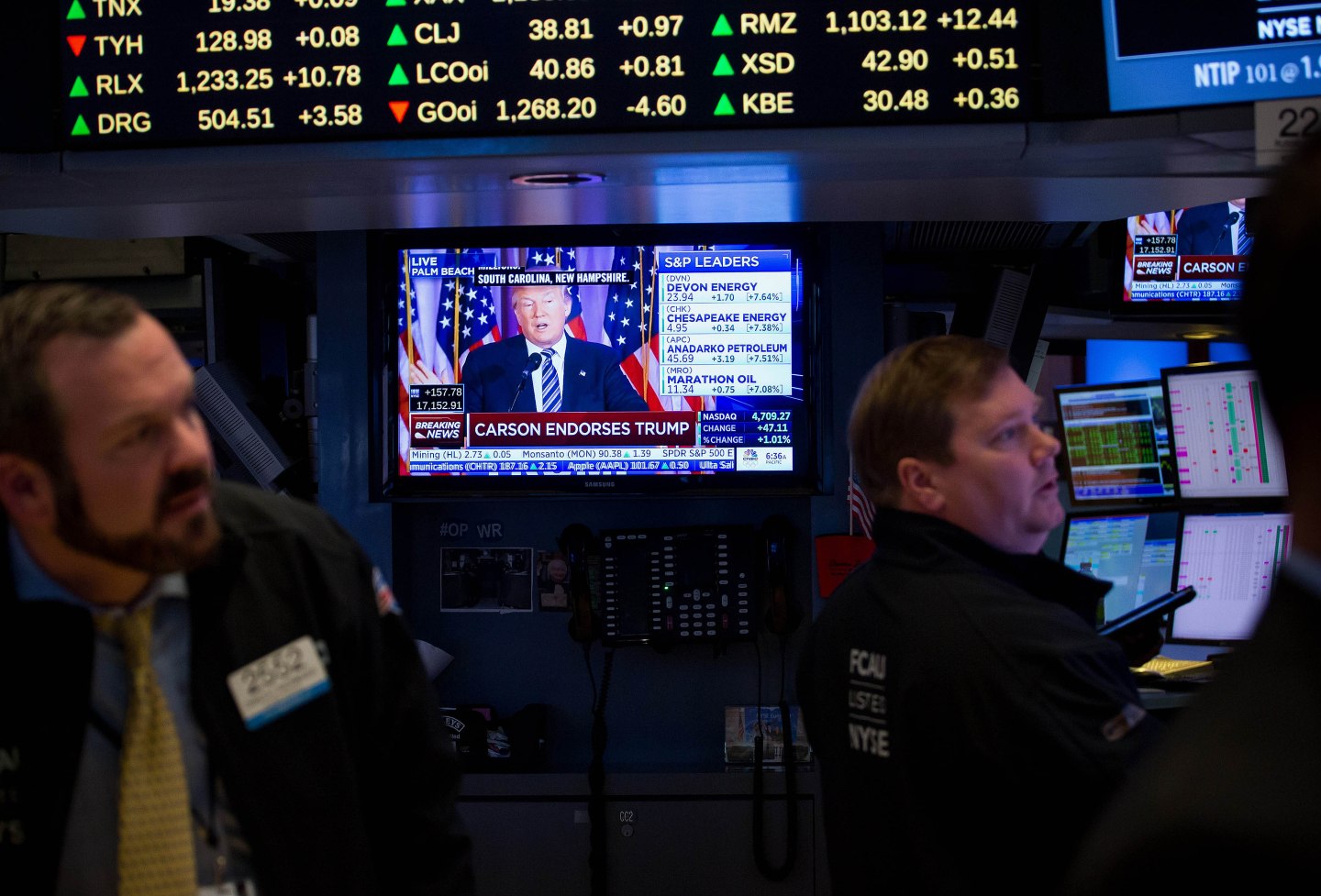 Donald Trump, president and chief executive of Trump Organization Inc. and 2016 Republican presidential candidate, is seen speaking on a monitor as traders work on the floor of the New York Stock Exchange (NYSE) in New York, U.S., on Friday, March 11, 2016. U.S. stocks rose to join a global rally, poised to erase a weekly decline as investors reassessed stimulus measures in Europe and warmed to the steps taken to boost growth. Photographer: Michael Nagle/Bloomberg via Getty Images
Photograph by Michael Nagle — Bloomberg via Getty Images

Robert R. Johnson is president and CEO of the American College of Financial Services and co-author of the recent McGraw-Hill book, Invest With The Fed.

In a presidential campaign unlike any other, Donald Trump has proven what playing on voters’ anger can do. Yet despite their frustrations with big banks, he claims Wall Street is “dying to do business” with him. And in the abstract, it seems Wall Street would indeed prefer a presidential candidate who is a successful businessman over a career politician intent on raising income taxes on the wealthy. But Wall Street’s reception of Trump has been lukewarm at best, and is largely driven by his unprecedented level of unpredictability.

There is a timeworn investment adage that purports the market dislikes uncertainty, and Trump is truly a wild card in every sense of the term. While such a persona makes for must-see TV, it’s unsettling to investors. He has made statements that cause many to question his command of basic macroeconomic issues (although I am sure he would say that no one knows macroeconomics better than him). While some financiers, most notably Carl Icahn and Andrew Beal, support Trump’s bid for the presidency, other high-profile investors, such as George Soros, Roger Altman, and Marc Lasry oppose the billionaire businessman. Goldman Sachs (GS) CEO Lloyd Blankfein went so far as to say that the image of Trump with his “finger on the button blows my mind.”

His likely presidential opponent, Hillary Clinton, is no better off. Despite her highly publicized and highly compensated speeches at Goldman Sachs, Clinton remains a very unattractive candidate from the perspective of Wall Street. Her tax policies, including personal income tax hikes on wealthy Americans and taxes on high-frequency trading, make Wall Street nervous. And, given the popularity of Bernie Sanders and the need to woo the “Sandernistas” in the general election, she could adopt more anti-Wall Street positions. But the difference between Clinton and Trump is that Clinton has a track record and is more predictable, even though most on Wall Street may not applaud her.

During the campaign, Trump has indicated that he would tear up trade agreements, probably not long after deporting undocumented immigrants and repealing national health care. The heavy tariffs Trump has called for against China and other countries could lead to trade wars that would be economically disruptive and damaging to the world economy. To be sure, these moves would be economically disruptive and greatly concern Wall Street. While Clinton recently reversed her support of the Trans-Pacific Partnership, she has a record of supporting trade agreements and recognizes that the U.S. has to “trade with the rest of the world.”

But perhaps Trump’s most controversial suggestion came in early May when speaking to CNBC’s Andrew Ross Sorkin, suggesting he could renegotiate the terms on the national debt—in effect, paying creditors less than 100 cents on the dollar. While he later stated that he was misunderstood, the comments were pretty definitive. One of the greatest advantages of the U.S. Treasury is the ability to borrow at the lowest interest rates in the world. Any sort of default on U.S. debt would damage that ability and markedly increase U.S. interest costs. And we’ve all witnessed what happens in financial markets when U.S. lawmakers simply threaten to not increase the debt ceiling. Imagine what an actual default or “re-negotiation” would mean for the world credit markets.

Trump has also said that he would fire Fed Chair Janet Yellen and advocates that the Fed be audited. Let’s be clear: Trump is not talking about “auditing” the Fed in the traditional sense of the term. That’s an accounting firm’s job. What he’s referring to is politicizing the Federal Reserve—that is, putting it under political oversight. But an independent Fed, and one that isn’t subject to political pressure, is a great strength of the Central Bank. A politicized Fed could enact policy that benefits the party in power, yet may not be what’s best for the economy and country as a whole.

Trump’s disdain for Yellen seems wholly inappropriate and inconsistent with the facts. The Fed under Ben Bernanke and Yellen has successfully guided the U.S. economy and financial markets from the depths of the financial crisis. Market indices have nearly tripled from 2009 lows. If anything, Trump should be heaping praise on Yellen for her patience in guiding a Fed that has not raised rates too quickly and has let the economic data guide policies.

The biggest unknown with Trump is whether he will surround himself with assorted policy experts and very smart people, and then if he does, whether or not he will take their advice. Or will he instead feign expertise on every topic under the sun and keep his own counsel? If the recent list of proposed Supreme Court justices gives some traditional conservatives comfort, his other statements leave them wondering how his too-rash political speech might actually translate into public policy. Trump basically serves as his own strategist and campaign manager, overseeing his own day-to-day operations. Clinton, on the other hand, has a much larger campaign staff, and would likely run her administration the same way—surrounded by experts who can weigh in when necessary.

Truth be told, Trump’s biggest weakness from the Wall Street perspective is that he has not proven that he has the ability or willingness to listen to such advisers—people who are more knowledgeable than he is on economic, military, foreign policy, and other matters. He shoots from the hip and seems to believe that listening to others is somehow an admission of weakness.

As for Clinton, she has experience in Washington. While it may not be one that Wall Street applauds, it is one that market participants can anticipate and deal with. It seems that Wall Street is basically opting for the devil it knows over the one it doesn’t.