Presidential Impersonators Are Having a Field Day with Donald Trump 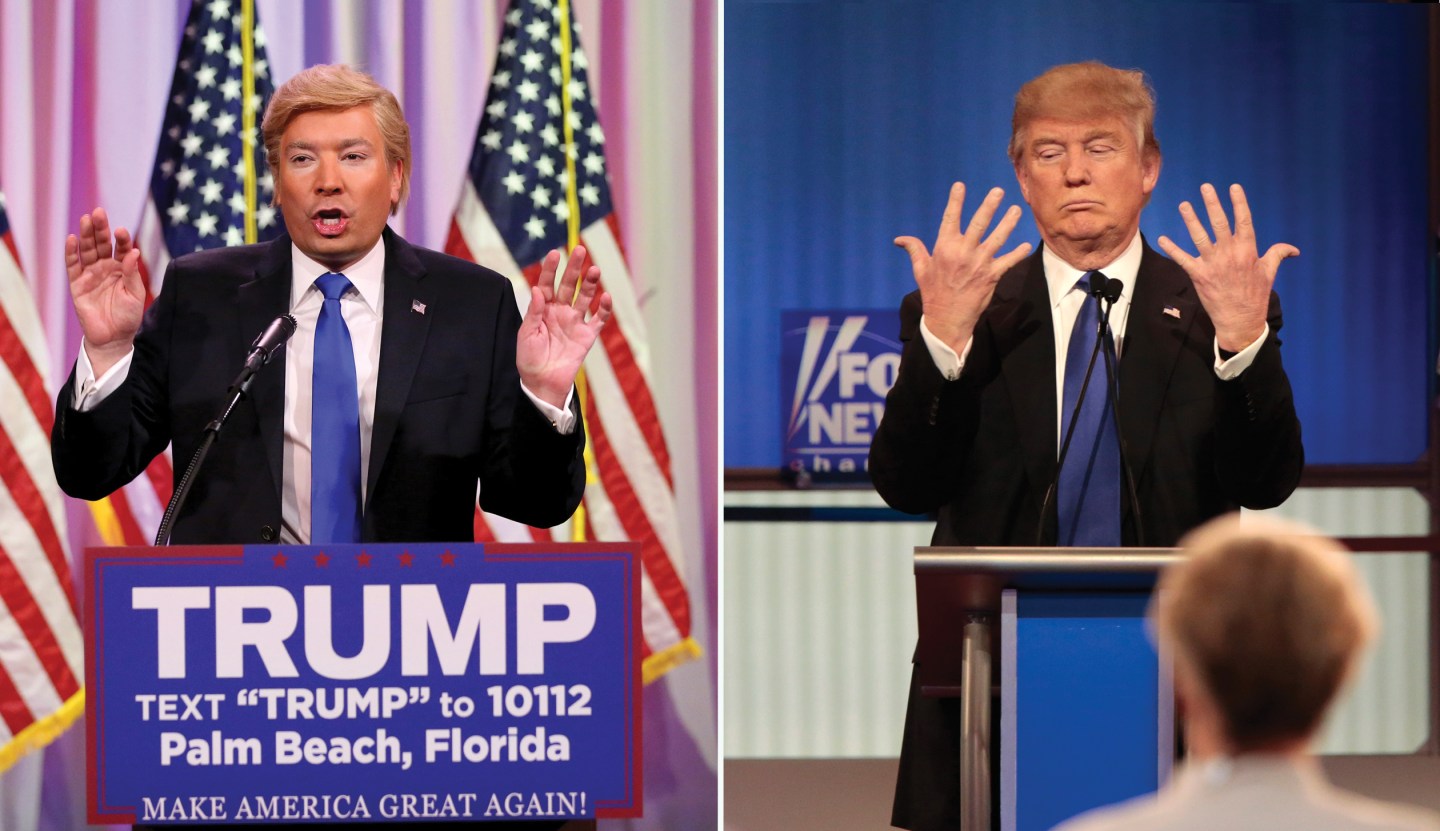 Lampooning political leaders is an art form dating back to time immemorial. This year is no exception, and the presidential candidates are taking their fair share of ribbing. One, however, is receiving more than the others.

If the number of people impersonating a presidential candidate translated to general election votes, Donald Trump would win in a landslide, crushing his competition in both the popular vote and the Electoral College.

Democrats Hillary Clinton and Bernie Sanders have their impersonators as well, but compared to the presumptive Republican nominee, it’s not even close. In fact, it’s a rout of Reagan-Mondale proportions.

Del Francia told Fortune that this year, there’s been lopsided demand for Donald Trump impersonators, far outpacing Hillary Clinton impersonators. “There aren’t that many Hillarys,” she said. “There are more Donalds by far. Two of our Bill Clintons are doing Donald Trumps, because they haven’t been busy.”

Her most popular celebrity impersonators are her Marilyn Monroe and Elvis Presley. The top ones earn “between $200,000 and $300,000 a year,” she said, though she also notes that her best Bill Clinton impersonator “got $10,000 a day for eight years.” John Di Domenico, who has been impersonating Trump for 12 years, has said that his rates have been jacked up — he’s earning almost $10,000 a booking.

Even actors and comedians on late-night shows, such as Saturday Night Live, have been busy impersonating Trump; Clinton, not so much. In any other year, the historical nature of her candidacy would make Hillary Clinton the main character, as Barack Obama was when he ran in 2008. However, in 2016, she’s playing a distant second fiddle to The Donald. Why is this?

According to Del Francia, Trump is “more of a character you can joke with. Hillary is more serious. When clients are looking for someone to mix and mingle with, or have a meet-and-greet for corporate events, they want someone that’s funny, and he just has to open his mouth.”

Del Francia added that physical appearance is a factor as well. “Donald Trump doesn’t look like a normal person,” she said. “Hillary is a normal looking woman. She doesn’t have an orange face. Hillary is a good speaker, and she uses comedy in her speeches, but Donald Trump is a character. That’s what the main attraction is.”

If Hillary Clinton supporters are saddened by this turn of events, they should take comfort in the fact that it could be worse. Vermont Senator Bernie Sanders has been completely forsaken by those hiring talent for corporate events. “Bernie, I haven’t had a request for,” Del Francia said.

That’s bad news for aspiring Bernie Sanders impersonators, because according to Del Francia, there’s good scratch to be made on the impersonation circuit. If you’re having a small party and just want “Bernie” to knock on your door and make a brief impromptu appearance, than can cost between $1,800 and $2,500. For something more complicated, the price can go up considerably.

“Is there keynote speaking?” she asked. “It can be $15,000 if it’s a speaking engagement. If he’s going to be introduced to the ABC network’s Christmas gathering, then it’s a different fee, because he has to prepare for a speaking part, and he’s there for maybe a few hours.”

Fortune asked Del Francia if she believed that the outsized demand for Donald Trump impersonators would translate to a general election victory for the real estate mogul. After all, according to Time, “the sale of presidential candidates’ Halloween masks has directly corresponded to the electoral outcome ever since Ronald Reagan’s rubber likeness outsold Jimmy Carter’s.”

Could the same principle apply to the number of candidate impersonators’ bookings? Del Francia was skeptical, yet guarded, on this score.

“I don’t think so,” she said. “It’s just about entertainment value from our end of it. For the general public, I don’t know. It’s a crazy election this year.”

Fortune presents a rundown of the performers who have perfected the art of lampooning 2016’s presidential candidates, with an outsized emphasis on the Trump impersonations.

Jimmy Fallon of “The Tonight Show” is considered one of the best Trump impersonators in the business. In this clip, he calls President Obama after becoming the presumptive Republican nominee, and commits the unforgivable sin of revealing a “Game of Thrones” spoiler.

Darrell Hammond of “Saturday Night Live” has been impersonating sitting presidents and presidential candidates for years, including Bill Clinton and Al Gore. In this clip he portrays Donald Trump at the press conference that he gave after New Jersey governor Chris Christie endorsed him.

Actor Johnny Depp has been having some problems lately. His most recent movie, “Alice Through the Looking Glass,” was a domestic box office flop, and his wife Amber Heard filed for divorce after one year of marriage, alleging that the actor had physically abused her. However, one area where he’s still doing just fine is in the Donald Trump impersonation department, as this May clip from an appearance on “Ellen” attests.

Bob DiBuono impersonates Donald Trump on “The Nightly Show with Larry Wilmore” on Comedy Central. In this clip, he presents himself as a more female-friendly candidate than Hillary Clinton, as long as you don’t talk to his ex-wives.

Kate McKinnon impersonates Hillary Clinton on “Saturday Night Live.” In this clip, she portrays the former Secretary of State as she reassures voters that she’s still got this, even after losing seven consecutive primary contests in April.

Comedian and “Seinfeld” creator Larry David has impersonated Vermont senator Bernie Sanders on numerous occasions, all to great effect. In this clip from October 2015, he discusses Hillary Clinton’s e-mail scandal at a Democratic debate.