A Brexit Is Looking More and More Likely 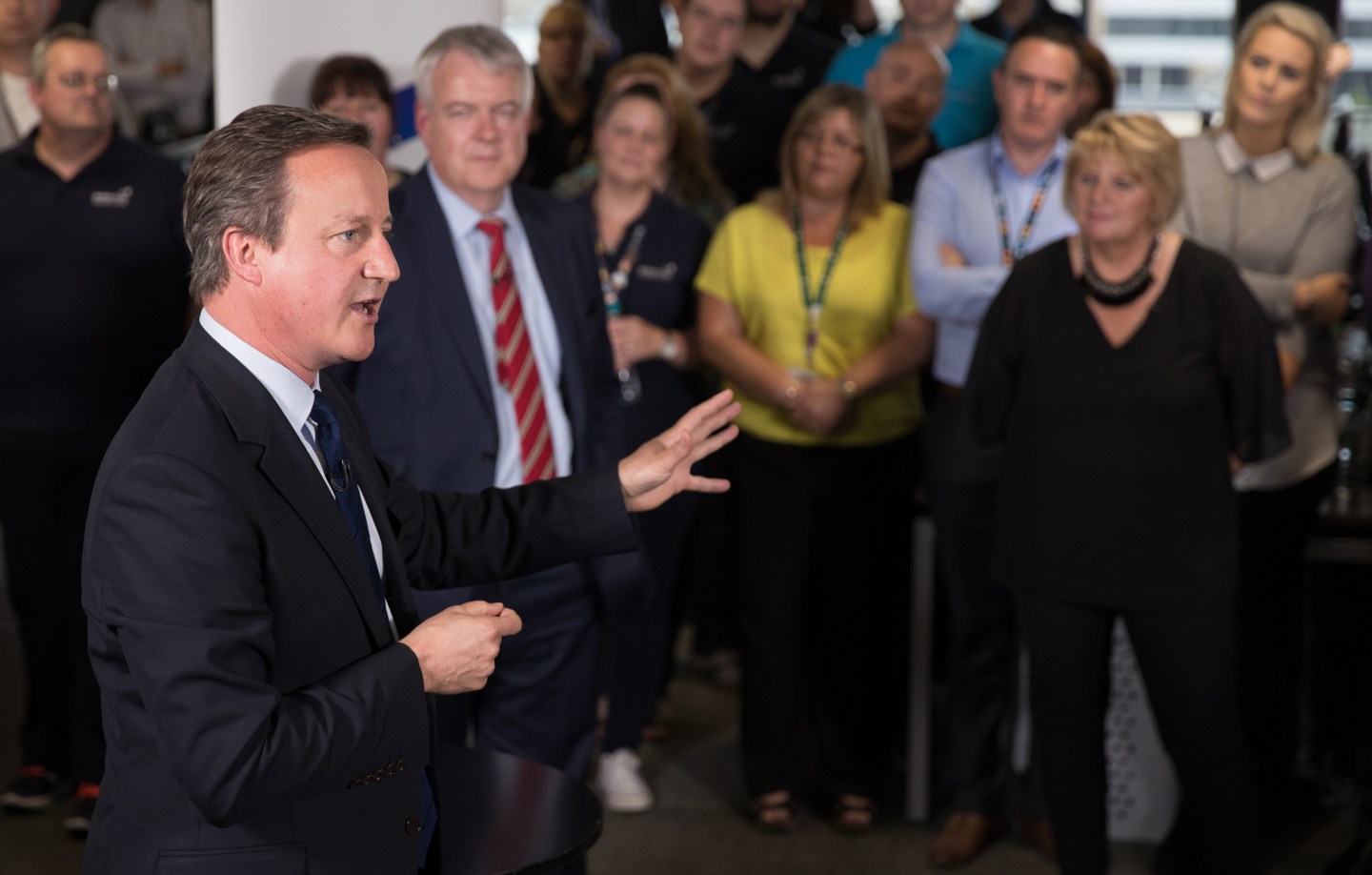 CARDIFF, WALES - JUNE 15: British Prime Minister David Cameron speaks about the EU and takes part in a joint question and answer session at the British Gas HQ on June 15, 2016 in Cardiff, Wales. The UK goes to the polls next Thursday, June 23, to decide whether Britain should leave or remain in the European Union. (Photo by Matt Cardy/Getty Images)
Photograph by Matt Cardy via Getty Images

In just one week, the British electorate will go to the polls for one of the most important decisions in the long and illustrious history of that nation: whether or not to remain part of the European Union. And over the last few days, Prime Minister David Cameron and those in favor of staying in the EU have appeared somewhat rattled, as recent polling results suggest that a vote in favor of a Brexit could very well be the outcome.

Cameron called the Brexit referendum earlier this year after years of speculation as to exactly when the long-promised vote would take place. The announcement set off a flurry of campaigning by supporters on both sides of the issue. The “remain” camp, led by Cameron, has argued strenuously that staying within the EU is essential for Britain, both economically and from a national security perspective, given what is perceived as the looming potential threat of Russia to the east. Moreover, Cameron and those supporting the pro-EU position to stay have argued that Cameron had succeeded in obtaining sufficient concessions from Brussels—including certain limits on tax credits, childcare benefits for immigrants entering the workforce, and non-discrimination against Britain for not using the Euro—that a vote to remain is justified, and that a vote to leave would isolate Britain diplomatically and lessen its influence in European affairs.

Chief among those arguing for Brexit, ex-London mayor Boris Johnson and a possible future Conservative prime minister, as well as Justice Minister Michael Gove and Nigel Farage, leader of the United Kingdom Independence Party (UKIP)—have contended that staying in the EU will lead to the gradual destruction of British sovereignty and independence, and that the “remain” camp has been engaged in relentless fear mongering designed to coerce voters into making a wrong-headed decision. They argue that leaving the EU would once again give Britain control of its borders and of immigration, which has been, as in the U.S., a hot-button issue.

There are an abundance of public opinion surveys that were taken during the referendum campaign, even extending to months prior to the official announcement in February of the upcoming vote. For several weeks in March and early April, surveys suggested an extremely close vote, with the “remain” side appearing to have a slight advantage. Beginning sometime in late April, it appeared that Cameron and others on the “remain” side were being successful in making their case to the British public, as the surveys had suggested a modest but consistent lead.

However, this “remain” support has slid in recent weeks. About two weeks ago, those favoring “leave” hit on a theme that seems to have resonated with the public. Specifically, their attacks on the immigration status quo combined with a specific proposal for a so-called points-based immigration system, somewhat along the lines of what Australia employs, has appeared to strike a responsive chord. At least according to most surveys, the Brexit side has opened up a small but consistent lead, and in at least one survey commissioned by The Independent newspaper, a massive 10-point lead: 55% to 45% among those considered certain to vote. Although likely an outlier, other surveys have shown smaller leads of two to four points for the “leave” camp.

Cameron and his supporters’ apparent discomfort suggests that their own internal polling may be indicating results similar to the public surveys. It seems clear that the next week will see an all-out effort by both camps to paint the opposition in the worst possible light. Cameron’s job is not made any easier by the tepid support of the Labour Party, led by left-winger Jeremy Corbyn, whose working-class supporters are divided as to the merits of staying in the EU.

At this point, a word is in order about the public opinion polling. Traditional telephone surveys taken during the referendum campaign have consistently shown a better outcome for the “remain” side than do the online surveys. It appears that the online surveys may be tapping a higher percentage of the possible electorate that the telephone surveys miss, and they tend to be disproportionately in favor of leaving. Given the nature of this campaign, however, the challenge for pollsters will be to determine who is most likely to show up to vote. Prime Minister Cameron, his supporters, and the opposition—led by Johnson, Gove, and Farage—all have a tremendous stake in the ultimate outcome of this contest. For Cameron, his job as prime minister is probably on the line, and the reputations of everyone involved hang in the balance. Interestingly, betting markets, which conduct a lively business in Britain, still that the “remain” side will prevail, with a 36% Brexit probability. And, betting markets have proven at times to be a better indicator of electoral outcomes than polls.

What does all of this have to do with the U.S.? A few weeks ago, President Obama proclaimed that Britain should vote to remain within the European Union. In contrast, many on the conservative end of the political spectrum, including writers like George Will and Republican presumptive nominee Donald Trump, have argued the merits of Britain’s withdrawal from the EU. As in Britain, the populist argument runs contrary to the diplomatic economic and cultural elites on both sides of the Atlantic. Indeed, there are remarkable similarities between the supporters of Brexit in England such as Johnson, Gove, and others, and their supporters across the Atlantic.

There may also be one quite self-serving reason for Democratic Party elites and Wall Street, which clearly support Britain remaining in the European Union to not pull the trigger next week. Wall Street and financial markets abhor uncertainty, and a “yes” vote on Brexit could seriously roil the financial markets. Indeed, as the prospects have increased over the past several days for a successful “yes” vote, the British pound and stock markets have slumped. It is quite likely that Obama and the Hillary Clinton camp are worried that a “yes” vote could add yet more uncertainty to what are already uncertain economic conditions. The last thing that Clinton wants going into the November election are to have the financial markets in retreat.

It will be fascinating indeed to see if the British vote next week—with its populist, anti-elitist theme, and questions about the future of British sovereignty—find a parallel to America’s presidential campaign.