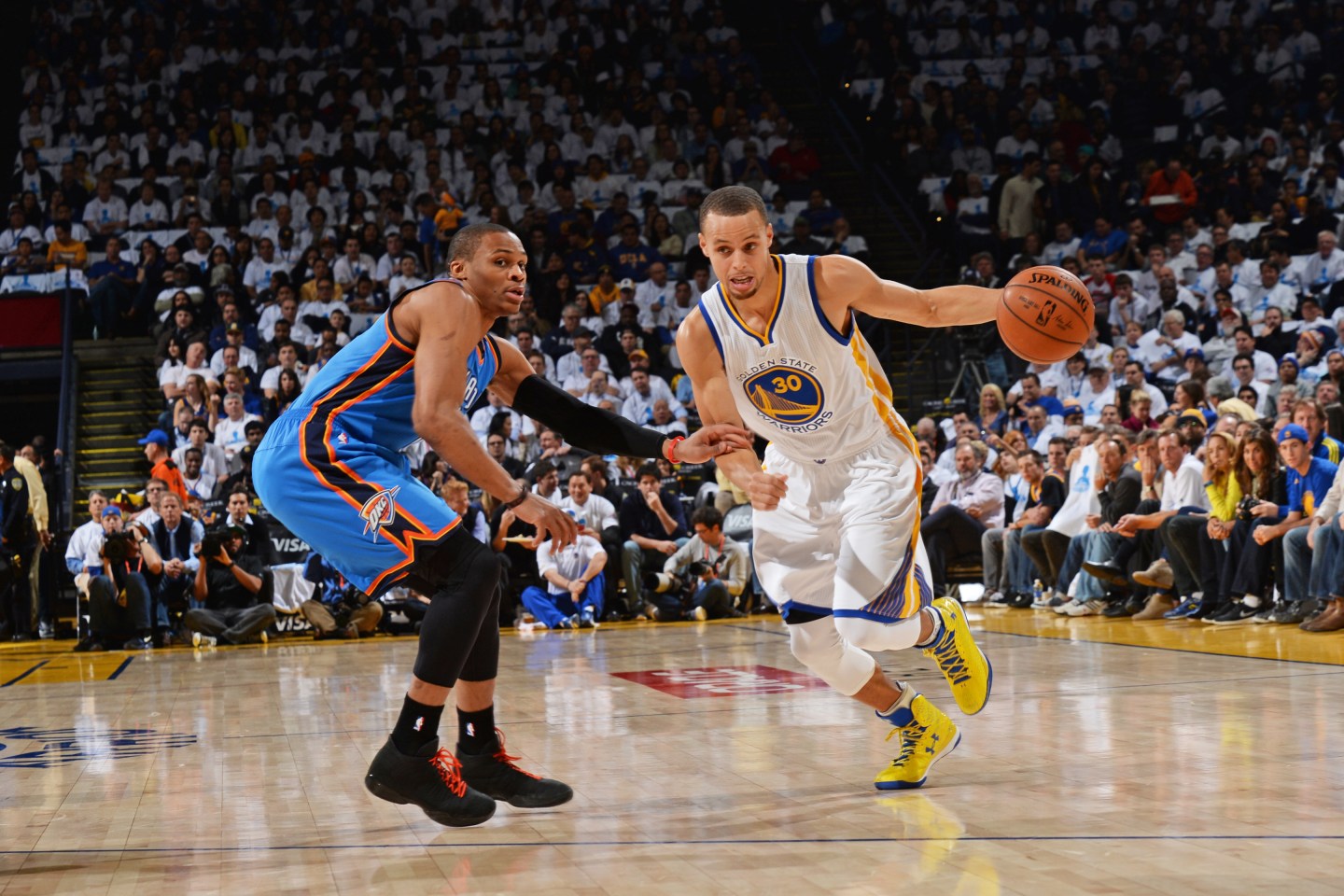 OAKLAND, CA - JANUARY 5: Stephen Curry #30 of the Golden State Warriors handles the ball against Russell Westbrook #0 of the Oklahoma City Thunder during the game on January 5, 2015 at Oracle Arena in Oakland, California. NOTE TO USER: User expressly acknowledges and agrees that, by downloading and or using this photograph, user is consenting to the terms and conditions of Getty Images License Agreement. Mandatory Copyright Notice: Copyright 2015 NBAE (Photo by Noah Graham/NBAE via Getty Images)
Photograph by Noah Graham—NBAE/Getty Images

With a few clicks, any sports fan can find Steph Curry’s scoring average or field goal percentage for a game. But what if someone wants to visualize every shot Curry took during the regular season, or how his three-point shooting percentage stacks up against the best ever?

Enter StatMuse. The startup, which is less than two years old and still in beta, utilizes a type of artificial intelligence called natural language processing (NLP) to field stats queries from sports fans. That means instead of relying on normal search terminology, it’s able to process searches formed in traditional sentence structure. For instance, a Google search of, “highest three-point field goal percentage in a season by a player with at least 400 attempts,” triggers a multitude of results, none of which lead concisely to the answer. But a StatMuse query worded the same way brings up over a dozen of the highest season-long three-point percentages displayed in a bar chart, led by the correct answer: the 49.2% mark put up by the Atlanta Hawks’ Kyle Korver two seasons ago (Curry’s 45.4% this past season comes in sixth-highest).

While it only offers NBA stats right now, StatMuse will expand to the four major sports leagues and beyond in the coming years. Its next domain expansion, Major League Baseball, is slated for a 2016 launch.

StatMuse’s ease and scalability is drawing the attention of investors, who are finally coming around to investing in NLP products. StatMuse announced in January that it closed a $10 million Series A round. The company garnered significant buzz coming out of the 2015 Disney Accelerator. The media giant is an investor in the company—along with firms like Greycroft Partners, Bee Partners and Allen & Company—and StatMuse recently agreed to provide statistical content for Disney-owned sports giant ESPN. The deal has significantly increased StatMuse’s exposure. In early April, as Curry and the Golden State Warriors chased the Chicago Bulls’ record of 72 regular season wins, the lead story on ESPN’s Curry-devoted vertical was a collection of StatMuse graphics showing Curry’s most impressive shot charts. Statmuse, not an ESPN writer, had the story’s byline.

On a weekday afternoon in April, Dawson, 29, scrolls through a StatMuse Slack channel on his phone in the lobby of a midtown Manhattan hotel. After high-octane stints at Lazard, HSBC and Bertram Capital, these days the Willow Springs, Mo., native and former high school basketball captain grins out from under the brim of a StatMuse hat. “I traded in the bespoke suit and Ferragamos for a fitted t-shirt and a pair of Jordans,” he explains.

Later that evening the Warriors will attempt to break the Bulls’ win record. Dawson is previewing GIFs on his phone that his company will post to Twitter if the Golden State wins. One of them features Curry riding a red mechanical bull with the text “73 wins” and confetti falling from the sky. When the playoffs start a few days later, the company will share a Game of Thrones-inspired map of different regions named after statistically prolific NBA stars.

Dawson and his team of 18 employees may look more like fans than Fortune 500 executives, but that’s kind of the point. StatMuse was created by diehard NBA fans to help other diehard NBA fans visualize stats they can’t even find, let alone display, embed and share in web posts and on social media.

“One of the goals for us is to go beyond giving people access to data. We want to also kind of put a face on that data for people,” says Justin Kubatko, StatMuse’s director of statistics and the founder of pioneering stats site Basketball Reference. Kubatko and marketing director Chad Shanks host a podcast called Stat Stories, and the company has hired a graphic designer for more pop-culture-copping gifs. Kubatko says the company aspires to eventually create video highlight packages that could correspond to stats users have searched.

But many of StatMuse’s users, like professional daily fantasy sports player Jeff Collins, are merely looking for information that gives them an analytical edge. Collins, a former Warriors ball boy who lives in California, discovered StatMuse in 2014. He immediately reached out to Dawson and offered to help him tailor StatMuse’s search capabilities not just for the traditional stats of NBA players, but for those players’ daily fantasy sports stats, as well. Now, Collins uses StatMuse every day to help optimize his NBA lineups for games, and estimates that most of the top NBA daily fantasy sports players do the same.

“I can search for, ‘How many FanDuel points per game does Kevin Durant score based on days of rest?’ That’s really relevant,” says Collins. “You could find that information before StatMuse, but it would take 30 minutes. Now it takes 30 seconds.”

Back in 2014, Collins was one of the 41 million fantasy sports players who composed StatMuse’s key demographic. Now, the company is also targeting general fans, based on player and team loyalty, stats junkies like Kubatko, and journalists looking to accentuate their stories with data visualization. Each of these demographics help spread StatMuse’s product by sharing or embedding charts online.

While still pre-revenue, StatMuse is aggressively exploring tactical platform expansion. One such integration is with Alexa, Amazon’s voice-controlled search hardware product released last year that also relies on natural language processing. Leveraging a conversational user interface aligns with StatMuse belief that sports fans will continue to demand not only a visual, but also a verbal customer experience, and that manipulating an app or a remote control by hand will no longer be relevant.

Whether it monetizes through exclusive partnerships, direct-to-consumer data subscriptions, streaming capabilities, or other methods, StatMuse will be forced to adapt the market as it scales up to new domains and platforms, and tries to master the evolving language of sports on the Internet.

After all, NBA stars like Steph Curry will go away, but their stats will last forever.