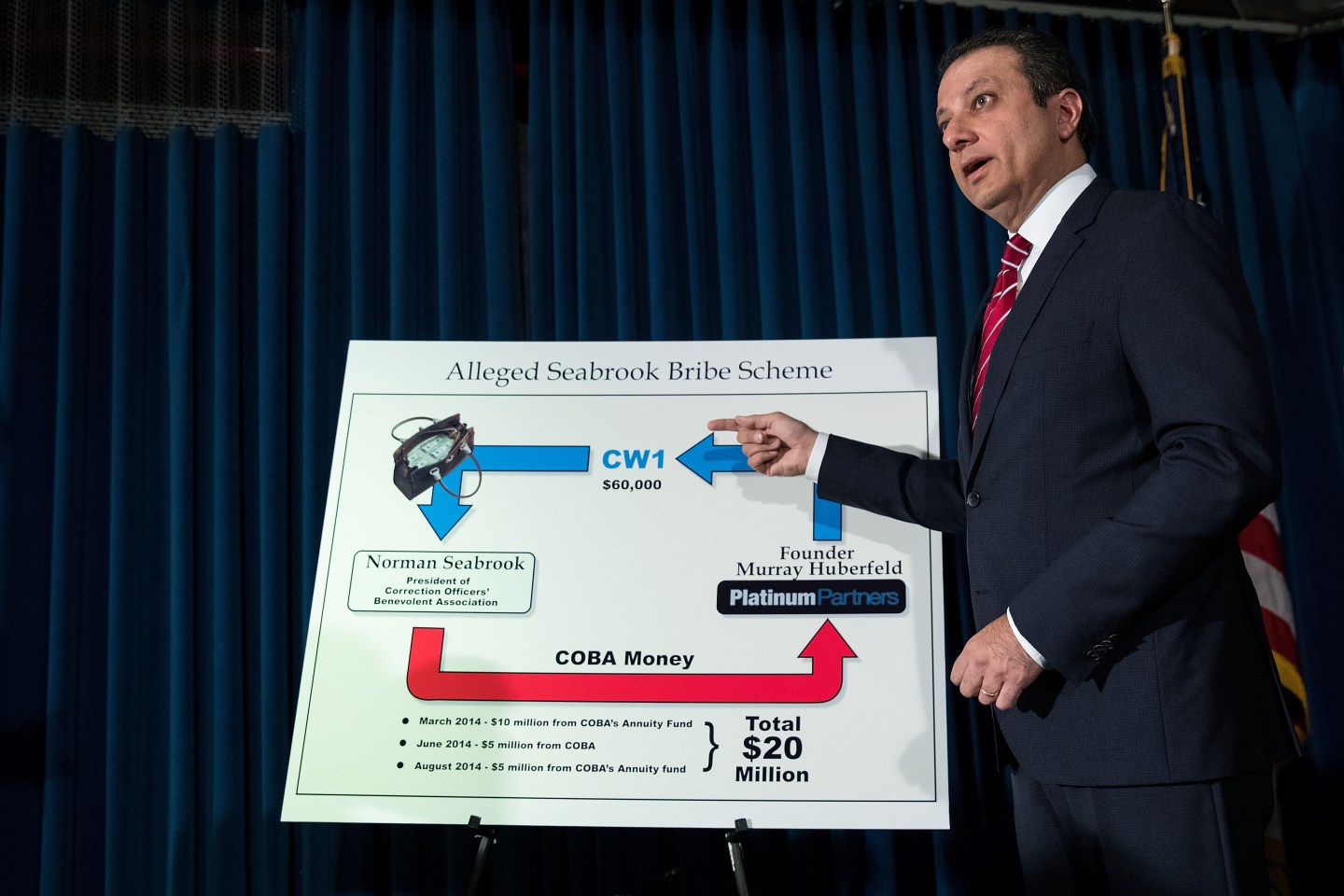 U.S. hedge fund Platinum Partners is returning the majority of its assets to clients following the arrest of a longtime associate on allegations he orchestrated a $60,000 cash bribe to secure an investment from a New York city union.

New York-based Platinum told investors on a conference call on Tuesday that recent negative media attention and requests for the return of capital had forced it to begin the liquidation of its more than $700 million Platinum Partners Value Arbitrage Fund, according to a person familiar with the situation who requested anonymity because the information is private.

The firm is also considering shutting its Platinum Partners Credit Opportunities Fund, the person said. That strategy recently controlled more than $500 million, the balance of Platinum’s about $1.35 billion in overall assets as of April.

The development comes after the arrest last week of Murray Huberfeld, who was accused of bribing Norman Seabrook, the president of the New York City prison officers’ union.

Huberfeld is a longtime associate of Platinum head Mark Nordlicht. He was an early backer of Platinum and remains an investor in the firm. The Centurion Credit Management hedge funds he ran were also taken over by Nordlicht and Platinum in 2011.

According to a U.S. Department of Justice complaint against Huberfeld and Seabrook, an intermediary gave Seabrook a Salvatore Ferragamo bag filled with $60,000 in cash as the first of what was intended to be several kickbacks for ultimately steering $20 million of union money into Platinum’s coffers.

Nordlicht said on the conference call that the charges against Huberfeld were unfounded, the person said.

Huberfeld, through an attorney, declined to comment on the charges against him and the Platinum news. An external spokesman for Platinum did not respond to requests for comment. News of the liquidation was first reported by The Wall Street Journal.

Founded in 2003, Platinum has racked up profits that are the envy of the hedge fund industry. But its winning strategy of lending to troubled companies carries risks that many institutional investors would just as soon not take, according to a Reuters investigation earlier this year.

The soon-to-shut Value Arbitrage fund gained nearly 8 percent in 2016 through April, according to a private HSBC Alternative Investment Group report seen by Reuters. The fund produced average annual returns of more than 17 percent since inception in 2003 with no negative years.

The still-open credit fund has also never lost over a calendar year since inception in 2005. It has averaged annual returns of more than 13 percent, according to the private fund data seen by Reuters.

Nordlicht told investors on the call Tuesday that a decision on whether to shut the credit fund would come in a matter of weeks, the source said.