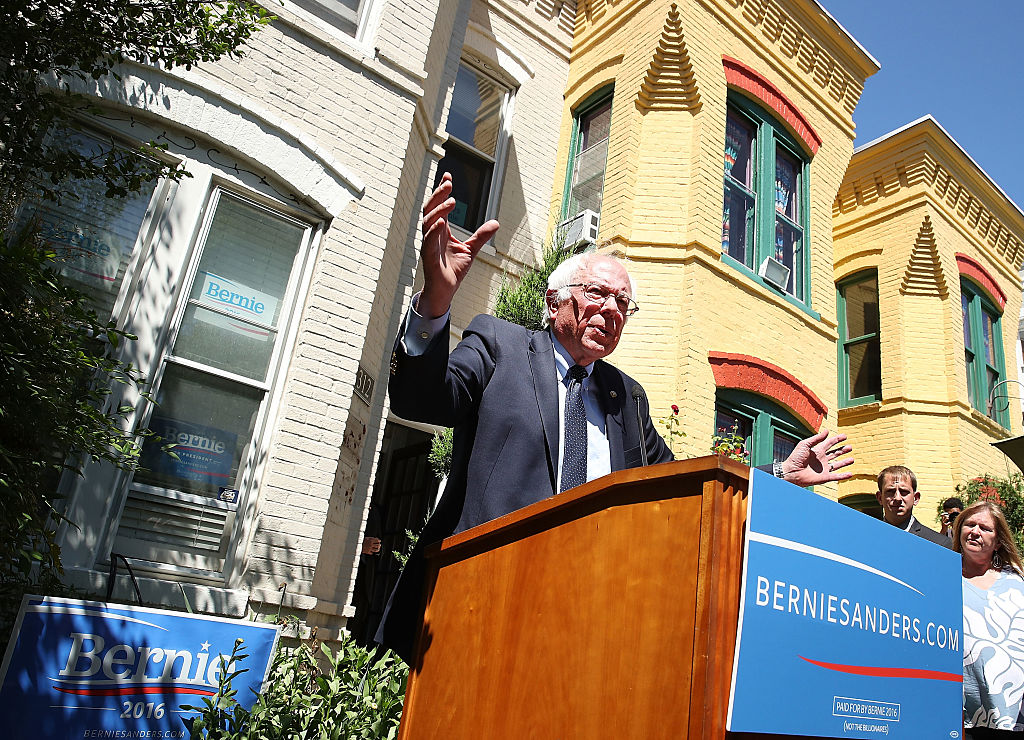 What’s next for Bernie Sanders? The Democratic Party will eat him.

Well, not really. But the party has already begun to gobble up Sanders’ supporters, message, and energy. And the Vermont Senator wants it to.

Sure, Sanders on Tuesday vowed to keep pushing his populist economic message through the Democratic National Convention next month, demanded concessions from his party, and lectured fellow Senate Democrats about how to appeal to his supporters. But he took those steps to get Democrats to appropriate his views. He has made it clear that he views Democrats’ desire for him to unite behind Hillary Clinton and release his convention delegates as leverage to force concessions.

Sanders reached the end of the Democratic primary fight on Tuesday when Hillary Clinton drubbed him in Washington D.C.’s primary fight, putting a cherry on top of her wins last Tuesday in California, New Jersey, New Mexico, and South Dakota.

But Sanders made demands, not concessions, on Tuesday. “The time is long overdue for a fundamental transformation of the Democratic Party,” he said at a news conference on Tuesday morning near Capitol Hill.

Sanders urged for the replacement of Democratic National Committee Chair Debbie Wasserman Schultz, who he said is not focused on expanding the party. He demanded the elimination of superdelegates and “the most progressive platform ever passed by the Democratic Party,” at the convention.

Sanders met on Tuesday night with Clinton in Washington for more than two hours. His goal was reportedly to win Clinton’s pledge to take up his call for a a $15-an-hour federal minimum wage, infrastructure spending designed to create jobs, and tuition-free public colleges and universities.

“The American people are hurting, and they are hurting badly,” Sanders said earlier on Tuesday. “They want real change, not the same old, same old.”

Sanders met on Tuesday with Democratic senators at their weekly luncheon. Other senators said Sanders got a warm welcome and gave a lengthy speech urging colleagues to do more to show they understand Americans’ economic concerns.

“He really challenged us and said the question is whether or not the Democratic Party is going to be responsive to those issues.” Senator Dick Durbin, the second-ranking Senate Democrat, said.

Durbin called Sanders’ message “a long one,” but “a “good one. Even if some are privately irked at Sanders’ presumption, other Democrats, including Clinton, are likewise striving to pull him into the fold.

They want to put his juggernaut of a fundraising network, which has netted record amounts from small donors, to work, and they want his young supporters to get behind Clinton and the party’s congressional candidates.

In the end, though, Sanders and Democrats may look like they are fighting, but they are mostly negotiating. Their mutual interests are too great to prevent a rapid reconciliation. To advance his policy goals in the coming years, Sanders will need the support of fellow Democrats, who, according to recent polls, are in good shape to win the White House and Senate majority.

Clinton, who has already offered partial support for a $15 minimum wage and sided with Sanders by opposing a free trade deal with Asian nations, is likely to emphasize those areas of agreement to win Sanders over. Clinton is also working to try to appeal to Sanders’ backers by publicly considering progressive favorite Elizabeth Warren, the Massachusetts senator, as a running mate.

Sanders has already noted the importance of defeating Donald Trump in the general election, signaling he will fall in line with Clinton sooner or later. Durbin said on Tuesday that while Sanders did not use his remarks to Senate Democrats to proclaim his allegiance to Hillary Clinton, his decision to challenge his colleagues to change showed that he has long served as part of the team, not as an adversary.

“For those of us who have listened to Bernie’s speeches for a lot longer than this last campaign,” Durbin said, “it was totally consistent with what he has told us over and over again.”