A Blood Test for Cancer Gets Closer 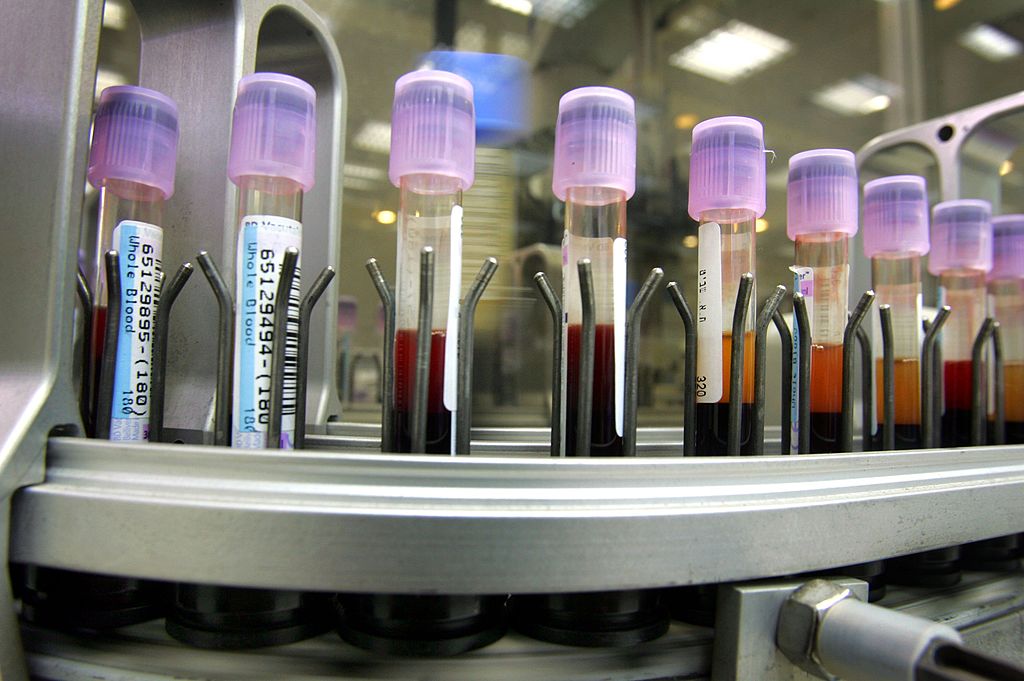 NES TSIONA, ISRAEL - JANUARY 22: Vials of human blood are processed as they lie on an automated testing line at the Maccabi Health Services HMO central laboratory January 22, 2006 in Nes Tsiona which is located in central Israel. The laboratory, which operates a fully automated system complete with advanced robotics, can test more than 50,000 blood samples a day. The lab is considered one of the most modern of its kind in the western world. (Photo by David Silverman/Getty Images)
Photograph by David Silverman — Getty Images

A blood test is one of the least invasive ways for doctors to get a peek inside the body. But when it comes to cancer, blood isn’t exactly a reliable source of information. While tumors do shed fragments into the blood, they’re rare and hard to find, so until now, the best way for doctors to learn about tumors is to physically go in and extract snippets of them with a biopsy.

But new advances in genetic sequencing is leading to more hope for a liquid biopsy for cancer, a way to track cancer through the blood. In a study presented at the annual meeting of the American Society of Clinical Oncology, researchers from Guardant report encouraging results from a study involving 15,000 patients who were tested with the company’s test that looks at 70 different tumor genes. The technology picks up tiny fragments of DNA shed by tumors into the blood, and sequences the DNA to provide a picture of which mutations are present in the tumor. That helps doctors decide which treatments are most effective against that person’s cancer, since many of the newer anti-cancer drugs specifically target certain mutant processes common in cancer.

The study found that more than two thirds of the patients did indeed have mutations that could be addressed with currently approved drug treatments, or with experimental drugs being tested in clinical trials.

For more on cancer treatment, watch:

What’s more, the team of researchers, which also included scientists from University of California San Diego, also compared the blood-based results with those from a physical sample of the tumor obtained from a traditional biopsy within six months of the blood test. Among these patients, there was 98% agreement over the genetic results of which mutations were present.

Those findings are the strongest yet confirming the utility of such blood-based tests for cancer. Such liquid biopsies carry an advantage over physical biopsies since tumors are notoriously heterogeneous; cells from one part of the tumor may be different from cells from another, and biopsies typically only take cells from one part. Tumors also change over time, but repeated biopsies are not practical for safety as well as economic reasons. Blood-based testing, however, could track tumors over time and provide a better picture of how the cancer is changing, and how treatments might also have to change if the tumor is becoming resistant to an existing therapy.

But even the researchers involved in the study don’t forsee liquid biopsies replacing physical biopsies completely. In order to diagnose cancer, a biopsy is needed to establish what type of cancer is present and verify its primary location. But, says Helmy Eltoukhy, co-founder and CEO of Guardant, “what liquid biopsies might replace is every biopsy after that.”

Says Dr. Julie Vose, professor of internal medicine at the Nebraska Medical Center University Hospital and president of ASCO, “We could imagine this type of assay could be used in the future to surveil patients and change their treatments when new mutations are found, without having to biopsy the original tumor, and in cases of metastatic disease where it may be more costly and dangerous to do that.”