With Oil Back at $50, East Texas Shows Signs of Life Again 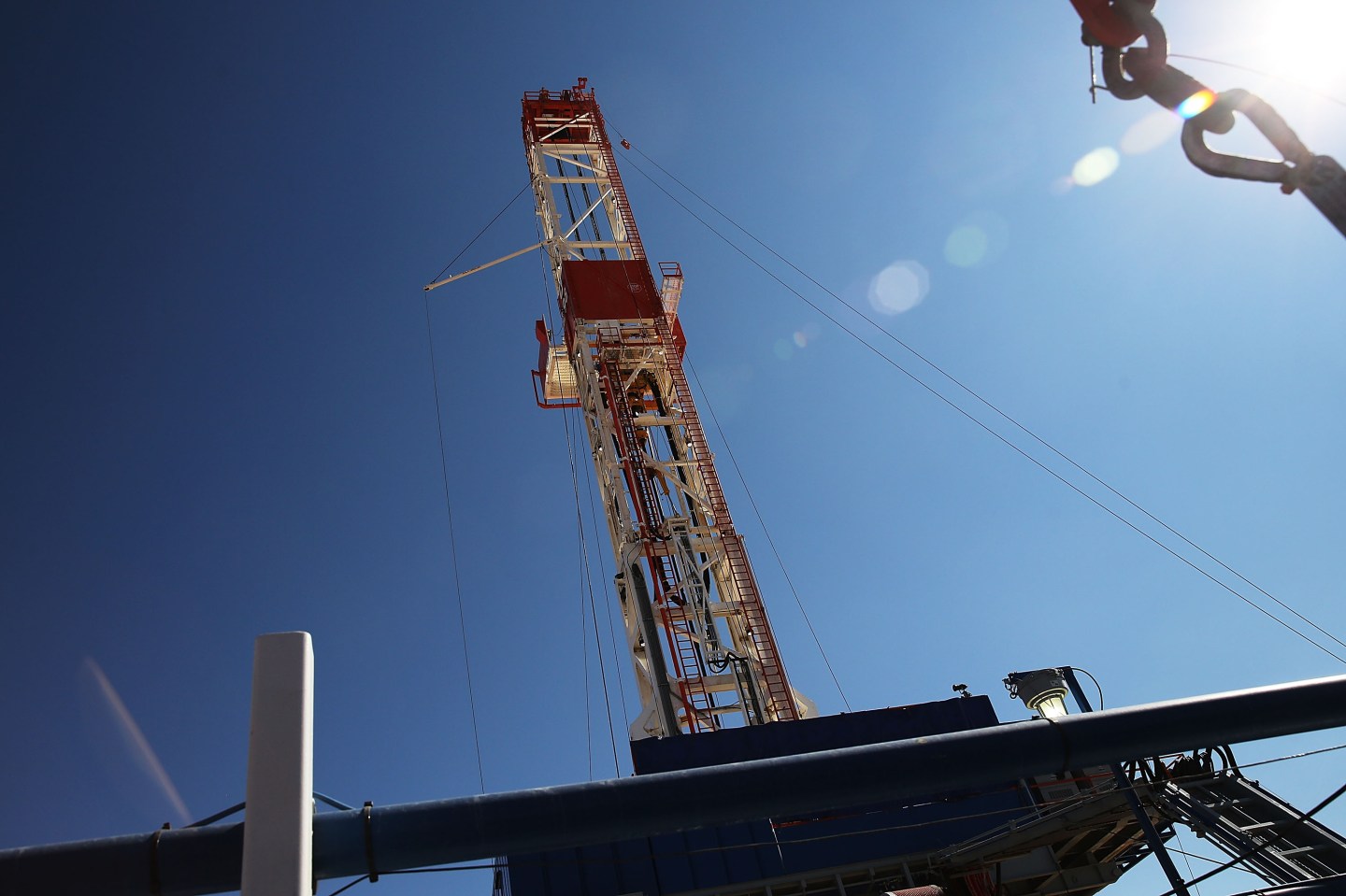 MENTONE, TX - FEBRUARY 05: The Patterson 298 natural gas fueled drilling rig drills on land in the Permian Basin that is owned by Apache Corporation on February 5, 2015 in Mentone, Texas.The rig, which is only 21 days old, is the first drilling rig in Texas that is 100-percent fueled by natural gas. As crude oil prices have fallen nearly 60 percent globally, many American communities that became dependent on oil revenue are preparing for hard times. Texas, which benefited from hydraulic fracturing and the shale drilling revolution, tripled its production of oil in the last five years. The Texan economy saw hundreds of billions of dollars come into the state before the global plunge in prices. Across the state drilling budgets are being slashed and companies are notifying workers of upcoming layoffs. According to federal labor statistics, around 300,000 people work in the Texas oil and gas industry, 50 percent more than four years ago. (Photo by Spencer Platt/Getty Images)
Photograph by Spencer Platt — Getty Images

Now as oil prices rise again, the third-generation oil man is offering his only rig crew bonuses to drill wells as fast as they can, but says his company, Elevation Resources, will wait until next year to deploy a second rig.

“We’re going to ease back into the activity, not stomp on the accelerator,” Pruett said. “We’ve all sobered up.”

Last year’s rollercoaster when crude prices rallied in the first half of the year only to come crashing down in the second half, burned many producers and Pruett and his peers remain cautious.

But there are signs of guarded optimism that this time the industry has really seen the worst of the nearly two-year downturn that cost hundreds of thousands of jobs, pushed dozens of firms into bankruptcy and led to an investment slump so severe that it weighed on the whole U.S. economy.

The number of rigs in the shale oil basin that spreads across more than 50 counties near the border with New Mexico rose by 17 to 146 on May 31 after bottoming in late April, according to data shared with Reuters by Drillinginfo, a consultancy.

The number of drilling permits – a leading indicator of future activity – issued for the Permian region in April, the latest month available, was the highest since October 2015.

The Permian rig count remains far below its November 2014 peak of 467 rigs recorded by oil services company Baker Hughes, and many areas and new wells less productive than those in “sweet spots” will need prices to climb further to be profitable again. But the stirrings suggest some relief is on its way. Job losses in Midland and Odessa, the region’s main cities, have slowed, local oil executives talk about plans to drill and some are already arranging new financing.

Keith Moore, president and CEO of West Texas National Bank, a local energy lender, says loan applications are starting to arrive again after a year-long pause. “People were sitting on their projects. It looks like we are on the edge of recovery.”

Pruett says with oil near $50, wells on three of Elevation Resources’ seven fields are already profitable and he expects prices to climb $60 next year, which would call for a second rig.

There are some signs of activity elsewhere. In North Dakota, permit requests rose by 10 to 66 in April, according to the latest readout and the rig count inched up to 28 last month before slipping back to a decade-long low of 27.

To be sure, it will take a broad, lasting recovery to stem the slide in business investment that shaved more than half a percentage point off the U.S. economic growth in the first quarter.

Drillers are also starting from a low base. For example, Elevation Resources has 30 employees now, compared with several hundred during the shale oil boom.

The fear of another “false dawn” is also keeping expansion plans in check. Last year, when crude prices climbed as far as $60 in late June, rig counts and drilling permits picked up too.

But a few things have changed since then.

At this time of last year, the U.S. crude production was still close to its peak of 9.69 million barrels a day and the global supply overhang showed no signs of abating. Today, U.S. production is falling and global supply growth is no longer outpacing demand. The U.S. government forecasts domestic output will bottom at 8.1 million b/d in September, then edge up by just 150,000 b/d through December.

The downturn also forced service companies to slash prices on everything from the trailers that house oil workers to lease rates for the drilling rigs. Pruett says he expects to lease his second rig for $15,000 a day, compared with $25,000 it costs him now under a lease signed during the boom.

He also says drilling crews that are still in the game are more experienced and it now takes them half the time to drill a new well as it used to.

It means that many producers can find ways to be profitable even if prices do not recover that much.

For Kirk Edwards, CEO of Odessa-based Latigo Petroleum, $55 a barrel will be enough to wade back in and take advantage of a perceived tightening of the market.

“People are still not convinced there’s a recovery yet.”

Some analysts warn of a repeat of last year’s reversal saying hefty global inventories will keep weighing on prices while temporary factors such as wildfires in Canada’s oil sands might have been behind a perceived tightening of supply.

Stephen Robertson, the executive vice president of Permian Basin Petroleum Association, a trade group, said oil executives are mindful of committing too soon like they did in 2015, but also concerned about missing out on a nascent recovery.

“A lot of people are optimistic about $50 oil,” he said. “No one wants to be caught flat-footed and miss the jump.”