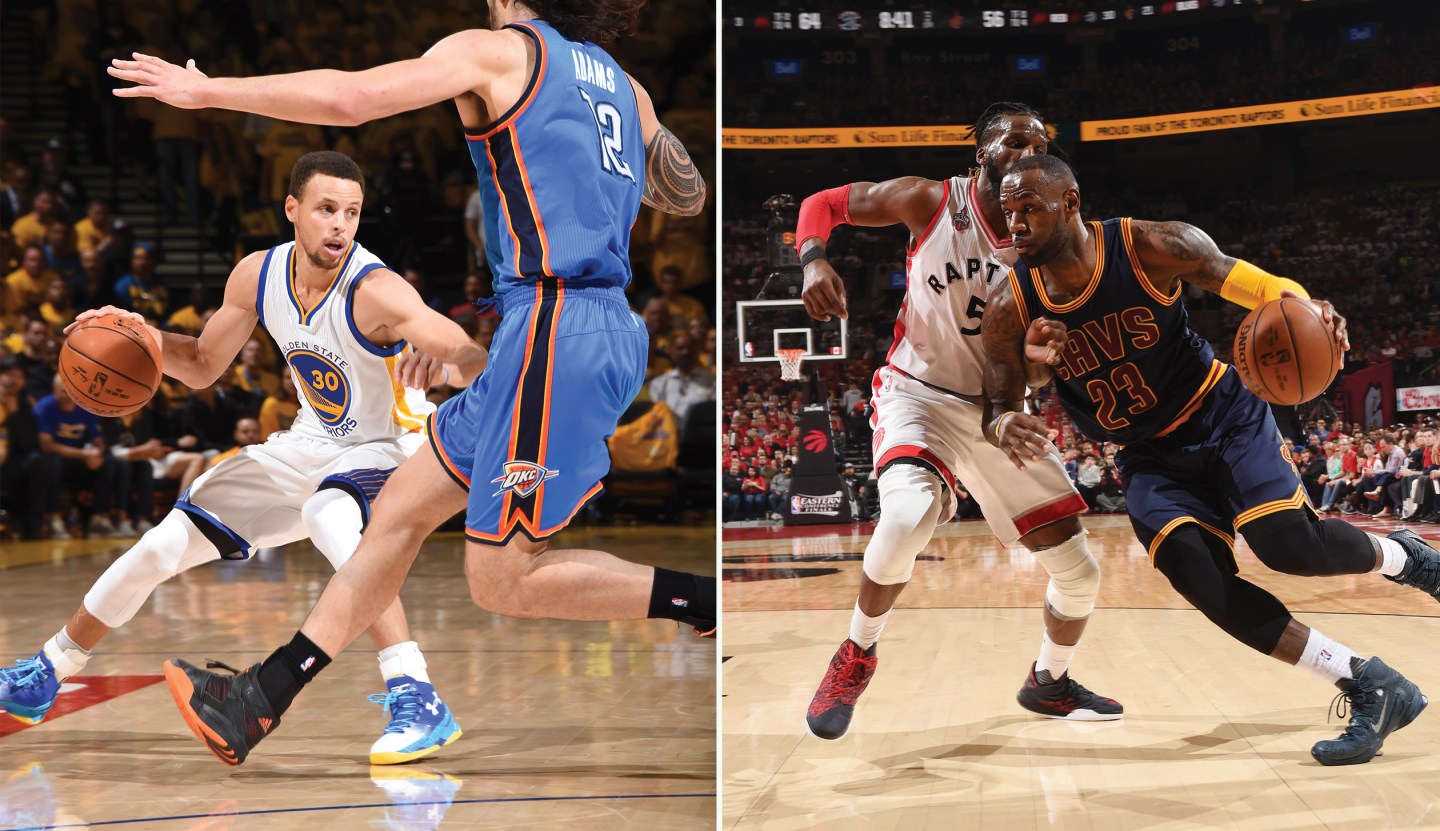 The Cleveland Cavaliers and Golden State Warriors will take to the court Thursday evening for the first game of the NBA Finals, setting up a rematch that not only pits LeBron James against Stephen Curry, but also athletic powerhouse Nike versus upstart Under Armour.

While most fans will be keeping track of their favorite players stats, at Fortune, we care about the business of sport. There’s millions at stake as fans scoop up their favorite basketball shoes and apparel – gear that has seen increased sales, boosting revenue for not only Nike (NKE) and Under Armour, but also sales at retailers like Foot Locker (FL).

With that in mind, let’s turn to some key statistics from e-commerce analytics firm Slice Intelligence, which combed data for millions of U.S. shoppers. This is what Slice found:

Curry has greatly bolstered the Under Armour brand, especially as he has had success not only on the court as the 2015-2016 NBA MVP, but also as a personality off the court, landing the cover of Parents Magazine this spring and also on Time‘s 100 Most Influential People. Under Armour CEO Kevin Plank told analysts earlier this year that Curry’s strong season brought “unprecedented attention to our overall footwear business,” which grew by 64% in the first quarter of 2016.

Plank said Curry’s ascent created a “once-in-a-generation opportunity for our brand.” There’s even more potential for the Curry brand throughout 2016, with the Curry 2.5 launching globally in July, followed by the Curry 3 shoe, due this fall.

But while Under Armour gets a lot of attention for fast growth within the basketball category, it is important to remember that Nike remains far ahead of its Baltimore-based rival. Nike is the market leader for both basketball footwear and apparel globally. That business is worth $3.7 billion as of last year – Under Armour’s entire operation pulls in $4 billion.

The behemoth for Nike is the well established Jordan brand, which remains a market leader long after the NBA star retired. That business is expected to double to $4.5 billion by fiscal year 2020, Nike revealed last fall.

But James is also important. Nike has worked with James since 2003, when the high school superstar was signed to a 7-year shoe deal. They renewed their relationship in 2010 and made headlines late last year with a lifetime deal.

Interestingly, this Curry and James-inspired Nike-Under Armour rivalry wouldn’t have happened if Curry didn’t defect from Nike in favor of a deal with the smaller Under Armour. While there have been more than a few reports as to what inspired Curry to leave Nike, the deal is transformative to Under Armour because it gives the company an opportunity to learn how to build a brand around the Curry name that can tap the influential “sneakerhead” market – those that collect rare shoes and are willing to pay very high prices for them.

The ties with Curry, especially if he becomes the next Jordan, could also put a halo over the entire Under Armour brand, benefiting the broader apparel and running footwear businesses.

An earlier version of the story misstated the name of the Warriors team. The error has been corrected.