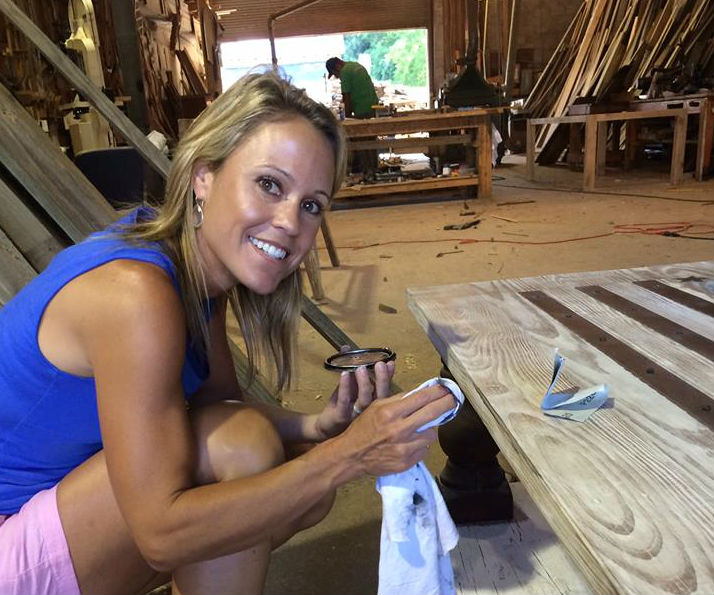 It sounds like the punchline to a twisted joke. But in July 2007, at the precipice of the subprime mortgage crisis that would send the entire U.S. financial system into a tailspin, Marnie Oursler started a home-building business.

The bad timing hurt but didn’t sink her. Despite a year where she only broke ground on one home, Oursler was able to grow her seedling venture into a healthy business that saw revenue of around $8 million last year.

Oursler’s success hasn’t gone unnoticed. In 2014, the 38-year-old Bethany Beach, Del. native was approached by TV producers for a potential series. Her show, Big Beach Builds, was picked up by DIY; the first episode airs in the fall. Not a bad trajectory for a company started immediately before the worst recession since the Great Depression.

‘Nothing was selling anywhere’

Oursler comes from a family of home builders — her father and grandfather both spent their careers building houses, and she grew up hanging out on construction sites. At 24, she decided to buy her first home in Bethany Beach, Del., and flip it. She says the down payment came exclusively from money she’d saved while working for a realtor after college, and from sticking to a tight budget — her diet consisted of “lots of peanut butter and jelly sandwiches.” The ability to live rent free at her parents’ nearby beach house also helped. With help from her dad, who came down on weekends to walk her through the process, she was able to do the renovations herself.

Related: How to Convince a Hiring Manager You’re Qualified for a Job

After refinishing that first home — and selling it for $100,000 more than she’d paid — she bought a lot on which to build a house from scratch. At the time, she was also working as a real estate agent, selling six or seven houses a month. Business was good.

But in December of that year “the music stopped,” she says. No one was buying houses, and so she spent the empty days “bored out of my mind. I didn’t make a dime for two months.”

She couldn’t sell the house she’d built, either. “Nothing was selling anywhere,” she says. “I started to panic.”

At a bypass, she latched onto an opportunity that she might have passed up if her own situation had been more secure: the chance to build a home for her neighbors.

Oursler launched her home-building business September 2007, and set to work on their property. At first, the situation looked promising for a newly minted startup — she easily landed another home-building project. But in early 2008, “everything hit the fan.” That year, she’d start construction on a single home, a precarious number for a new company. “That was a dark time,” she says. “[It involved] a lot of banging my head against the wall, thinking ‘what am I going to do?’”

While home prices took a hit, there remained a pool of wealthy, largely unscathed residents in nearby Potomac, Md., and McLean, Va., who still wanted vacation homes (and could afford to capitalize on the lowered cost of beach-front lots). Oursler just needed to access them. And so she reached out to anyone who could help her do this — architects, designers and contacts from her real-estate career, including Leslie Kopp. One of the top real-estate agents in the area, Kopps became a fairy godmother of sorts, referring clients and helping Oursler refine her presentation style.

Slowly, her networking efforts paid off. In 2009, she landed three new projects and purchased a foreclosed lot upon which she built a house to sell.

Completed in 2010, its open-house was held on Memorial Day. Having invited “the entire town,” Oursler expected a solid turnout — it was a long, lazy weekend and she’d promised there’d be beer and wine – but not the hundreds of people who showed up.

Looking back, that was the turning point. “I met so many helpful people,” she says, from future clients to the woman who ran a tour of cottages in the area and, charmed by what she saw, agreed to include Oursler’s home.

From there, things “started to boom.” She began taking on more and more projects. Demand grew as positive word-of-mouth spread and the economy recovered; for the past half decade, Marnie Homes has averaged seven houses a year.

Although there are still unexpected setbacks, Oursler is finally comfortable with the health of her business. Which means the DIY series came at the right time — she’s ready for the exposure and the next challenge.

“A lot of people say, you just got lucky,” she says. “But there’s luck – and then there’s seeing those opportunities and seizing them.”