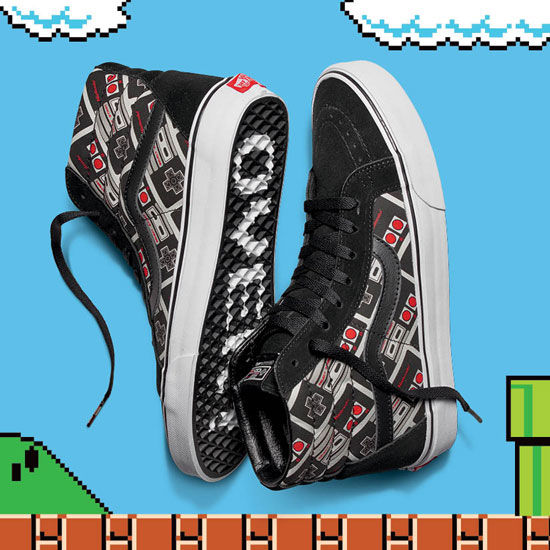 For anyone worried about picking out the right sneakers to pair with your next retro-gaming session, Vans and Nintendo have you covered.

For its latest special collaboration the iconic skateboarding shoe and apparel maker, has paired with the Japanese gaming company behind classic video game titles Donkey Kong, the Legend of Zelda, and Super Mario Bros. VF Corp.-owned (VFC) Vans said this week its “Vans x Nintendo Collection” will be available starting June 3 and will include a line of footwear, clothing, and accessories based on a variety of classic Nintendo games and characters, as well as products inspired by Nintendo’s first-ever console, the classic Nintendo Entertainment System (NES).

Included in the line-up are pairs of Vans slip-on sneakers featuring characters and lines of dialogue from 1986’s Legend of Zelda and classic Vans Authentic skateboard sneakers featuring Super Mario characters such as Mario and Goombas as well as Princess Peach. Some of those sneakers even feature the phrase “Game Over!” printed on the bottoms of the famous Vans waffle soles.

Other products, which will be available in adult and children’s sizes, include a line of tie-dye items such as tank-tops, flip-flops, and a backpack featuring Super Mario characters, as well as pairs of Vans’ high-top Sk8-Hi Zip sneakers styled with a pattern of controllers from the classic NES console.

Having recently celebrated its 50th anniversary as a brand, Vans is no stranger to limited edition collaborations, having lent its iconic styles to a variety of pop culture mash-ups ranging from The Beatles to Star Wars and other Walt Disney (DIS) characters.