Misery Tourists: How the Wealthy Learn What It’s Like to Be Poor 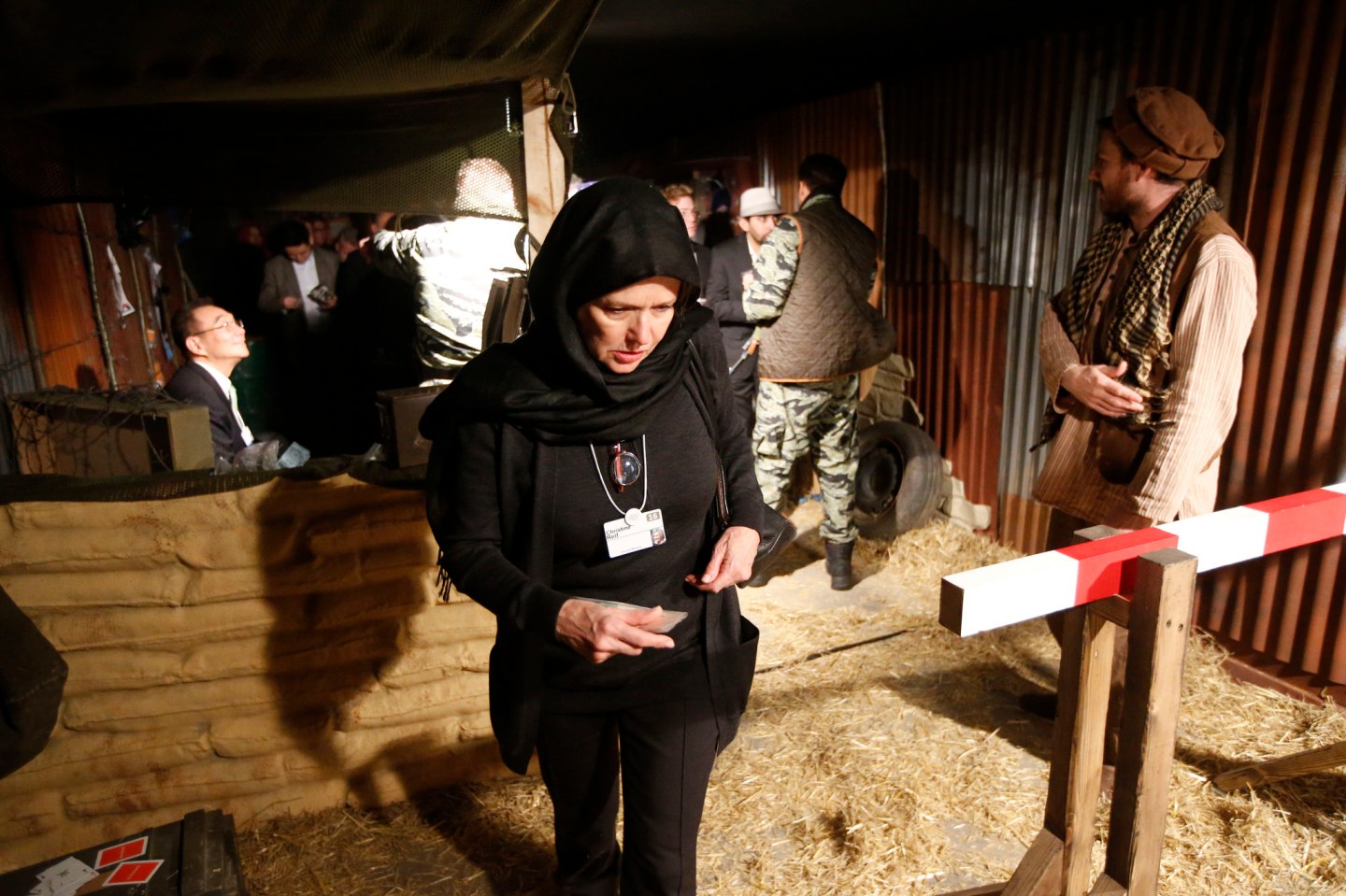 Tiela Chalmers, an accomplished lawyer, went to her first “poverty simulation” workshop kit when she was working for a group that helped domestic violence victims. Assigned an identity — married grandmother raising two grandkids — she was directed to navigate a series of challenges that actual poor people face, such as trying to live on a budget (frequently $300 to $400 a month in such simulations), scraping together money for utilities and children’s eyeglasses, and dealing with health issues without losing hours at work (and income).

She quickly found the logistics overwhelming. “I just could not make ends meet and the kids’ needs came last,” she said, adding she could see why it would lead to alcohol abuse. “Part of what struck me was that there was no relief.”

Now the CEO and general counsel for the Alameda County Bar Association and Volunteer Legal Services Corporation, Chalmers often runs such simulations for other lawyers and professionals. What was done with little attention in the past has become a small cottage industry, as the privileged try to understand at least a bit of what the poor and refugees face. The World Economic Forum annual January meeting, where the business and political elite gather in Davos, has held a refugee simulation for the last eight years.

Participants wait in their tents at ‘nighttime’ in the camp at A Day in the Life of a Refugee. © David McIntyre/Crossroads Foundation Ltd.

Advocates say the goal is to encourage the affluent to use their time, money and influence to help find solutions. But critics point to a darker side, where participants can become what you might call misery tourists, collecting experiences and assuaging discomfort by having now done their part. The Singapore Island Country Club, for instance, was recently criticized when it planned a poverty simulation for its club members; it costs $21,000 a year to belong to the club. Some people accused the club of “trying to humiliate the poor” and called the undertaking an “exercise in futility.” The organizers postponed the event.

Late last year, two non-profits, Giving What We Can, and Empathy Action, faced a sharp backlash when they planned to host a poverty simulation at Clare College, which is part of the elite University of Cambridge in the U.K. The organizers said they would turn “Clare College cellars into a run-down, oppressive slum” and create an event that was characterized as being “fun and insightful,” and participants were invited to stay “afterwards for a drink in the bar.”

Nungari Mwangi, co-president of the African Society at Cambridge, took to Facebook to blast the event as “ignorant” and a “vain attempt to appropriate the struggles of the world’s poor as a game, over drinks in the most privileged of settings.” Others attacked it on Twitter.

Wait this is a real thing that cambridge students thought would be ok to do pic.twitter.com/tOJfWTlywB

Fighting in the camp puts one ‘refugee’ in the camp prison, at A Day in the Life of a Refugee. © David McIntyre/Crossroads Foundation Ltd.

[After the uproar, Giving What We Can released a statement, noting the Cambridge event was organized by “one of our student groups” without the knowledge or involvement of Giving What We Can leadership. “The information provided to us about the event shows that it was clearly insensitive and completely inappropriate. We were unaware that the event was going to take place, but to the extent that it was planned by a student group with a connection to us, we sincerely and unreservedly apologise.”

Sometimes the locations where simulations are held can create an ironic image. Last year the Federal Reserve Bank of Cleveland held a policy summit that included a poverty simulation — at the Omni William Penn Hotel, a luxury property in Pittsburgh. The Bank of America Black Executive Leadership Council has a poverty simulation scheduled for June 29, 2016 at the upscale Ritz-Carlton in Charlotte, North Carolina.

And yet, many of these poverty simulation workshops have been going on for years, without controversy. Every year for the last 12 years, Refugee Norway has put some 5,000 Norwegian teenagers through a weekend of simulated refugee experiences, including sleep deprivation, exhaustion, and hunger.

This year, some 500 participants at Davos went through what journalist Jay Yarow called a “terrifying” refugee simulation with bullying, explosions, and threatening people carrying guns. Rose Beaumont, group head of communications at MasterCard Europe was one of the attendees. She wrote a in blog post that she was a bit cynical in advance, but found that gaining sympathy and understanding for actually refugees came more easily than she thought as she “cowered from explosion, was crammed into basic tents with strangers and was stripped of my dignity and identity.”

Soldiers’ booty, after confiscating valuables from participants at the border crossing in A Day in the Life of a Refugee.David McIntyre/Crossroads Foundation Ltd.

Crossroads Foundation, a humanitarian aid and development organization that puts on the Davos simulation, spends $100,000 to bring in the volunteer staff and actors, set up the space, and run the event. There’s no fundraising; the goal is far bigger than raising money.

“[W]e began to realize that mere education alone does not always result in change,” Crossroads spokesperson David Begbie told Fortune. And if you want change, why not influence those who can make it in a big way? “I have seen multiple people leave their jobs and go into micro finance and the relief sector [after a simulation].”

The poverty simulation kit that Chalmers uses was developed by the Missouri Association for Community Action; MACA sells the kit for $2,000 and organizations can reuse it. MACA claims that the experience sometimes leads to actionable insights. Some hospitals learned that poor patients might arrive at the emergency room “and didn’t have a way to get home,” MACA Executive Director Heather Lockard said. Hospital management began to provide public transportation passes for the patients.

“You can’t know [the experience] unless you live it day in and day out,” said Hilarie Atkisson, director of corporate social responsibility and pro-bono counsel at law firm Fenwick & West, who was in an MACA simulation in January. “But any kind of awareness can help facilitate change in a small way.”

Iowa’s Drake University pharmacy program requires second-year students to do the same simulation. Many of the patients they will see are poor. “We want to make sure our students are approaching that work from a sensitive lens,” said Renee Sedlacek, director of community engaged learning.

But the results of some simulations can raise questions. Hamline University, a liberal arts college in St. Paul, Minnessota, subsidized “alternative Spring break trips” for students who pay as much as $400 to focus on issues of social justice. A trip to Washington, D.C. earlier this year included a “homeless plunge,” in which students spent 48 hours living on the streets in pairs, with a blanket and a phone for emergencies. Some said they found it eye-opening, a “window into how people experiencing homelessness live and feel.”

And yet, Hamline student paper columnist Andy Stec wrote that some participants’ Facebook posts “highlighted how ‘depressing’ and inconvenient they found being homeless,” while posting pictures of their experience. The trip had been just that — something over and done with.

If participants treat such events as bucket list items that are fodder for later stories, the experience can turn into ego gratification. But, in the meantime, those who put them on will continue to do so, rolling the dice for a better outcome.

The following is a sampling of poverty and refugee simulation programs.

Cost: $120 per person
Location: Denver, Colorado
Description: A weekend “poverty simulation” or “refugee simulation.” Dr. Jeff Cook leads weekend simulations — four poverty and two refugee — a year. In the poverty simulation, participants start at a thrift store, are allowed to spend only $4 on clothing for the weekend, and then experience hunger, lack of sleep, being out in the cold, panhandling for food money, and spending time working with groups that aid the homeless. The refugee simulation takes place on a 400-acre farm in which participants are disoriented, are harassed and chased by groups, face challenges of finding food and shelter, and then are forced to fill out asylum forms in a language they don’t understand.
Quote: “I’m surprised at how deeply moved people are,” Cook said. “They say, ‘I had no idea, I had no idea.’ The most surprising to them is to find out how difficult it is to be poor.”

Cost: €60 (approximately $68)
Location: A former military base near Oslo
Description: About 5,000 teenagers a year go through a weekend simulated asylum journey to fulfill part of a religious or civil confirmation process. Carrying only backpacks, sleeping bags, and warm jackets, they receive foreign identities, are forced to march through the night, and undergo hunger and sleep deprivation. At the end of the program they learn that only a few of them would receive asylum and that the rest would have to return to their home countries.
Quote: “We have an internet-based evaluation that all participants can answer,” said Deputy CEO Lasse Moen Sørensen. “A great deal of them do answer and, based on their statements, it is clear that the vast majority of them report to have gained more interest and sympathy for refugees and their situation.”

Cost: $30 per person
Location: Spokane, Washington
Description: Participants in the three-hour simulation memorize their biographies and then proceed through a series of steps including a visit with immigration officials, a refugee feeding station, a medical clinic, and a language acquisition class and must pass through interviews at each stop.
Quote: “Since the program began in 2007, hundreds of students, churches, schools, and non-profit organizations have participated in this life-changing experience that has transformed their global perspective,” the organization’s website states.

Cost: Priced by group from a “modest” fee to $1,500, depending on the group size, travel time, and number of staff needed for the simulation and additional training.
Location: Ohio
Description: Produce group simulations based on the Missouri Association for Community Action kit.
Quote: “The reactions of participants vary widely,” said executive director Lisa Hamler-Fugitt. “For those who have no concept of the struggle and grinding realities of life in poverty, it’s a sobering and shocking experience, a wake-up call of how hard it is and hopefully it changes their hearts and minds.”

Cost: $65 per person
Location: Waco, Texas
Description: The religious organization offers weekend simulations for groups that can include people from 14 through adult. Changing into thrift shop outfits, they spend the weekend without money, shelter, or hot water. Participants must find ways to get food (without dumpster diving or begging), interview someone who is homeless, undertake a scavenger hunt, and sleep outside.
Quote: “The poverty simulation weekend’s design helps participants ‘feel’ the realities of hopelessness, hunger, inadequate sleep and frustrating choices,” wrote executive director and co-founder Jimmy Dorrell.

Update: This story was updated to include a 2015 statement from Giving What We Can about the Clare College event. Giving What We Can had disavowed the event as insensitive and stressed at the time that it was organized by a student group.