Greece Is Kicking Another Can Down the Road 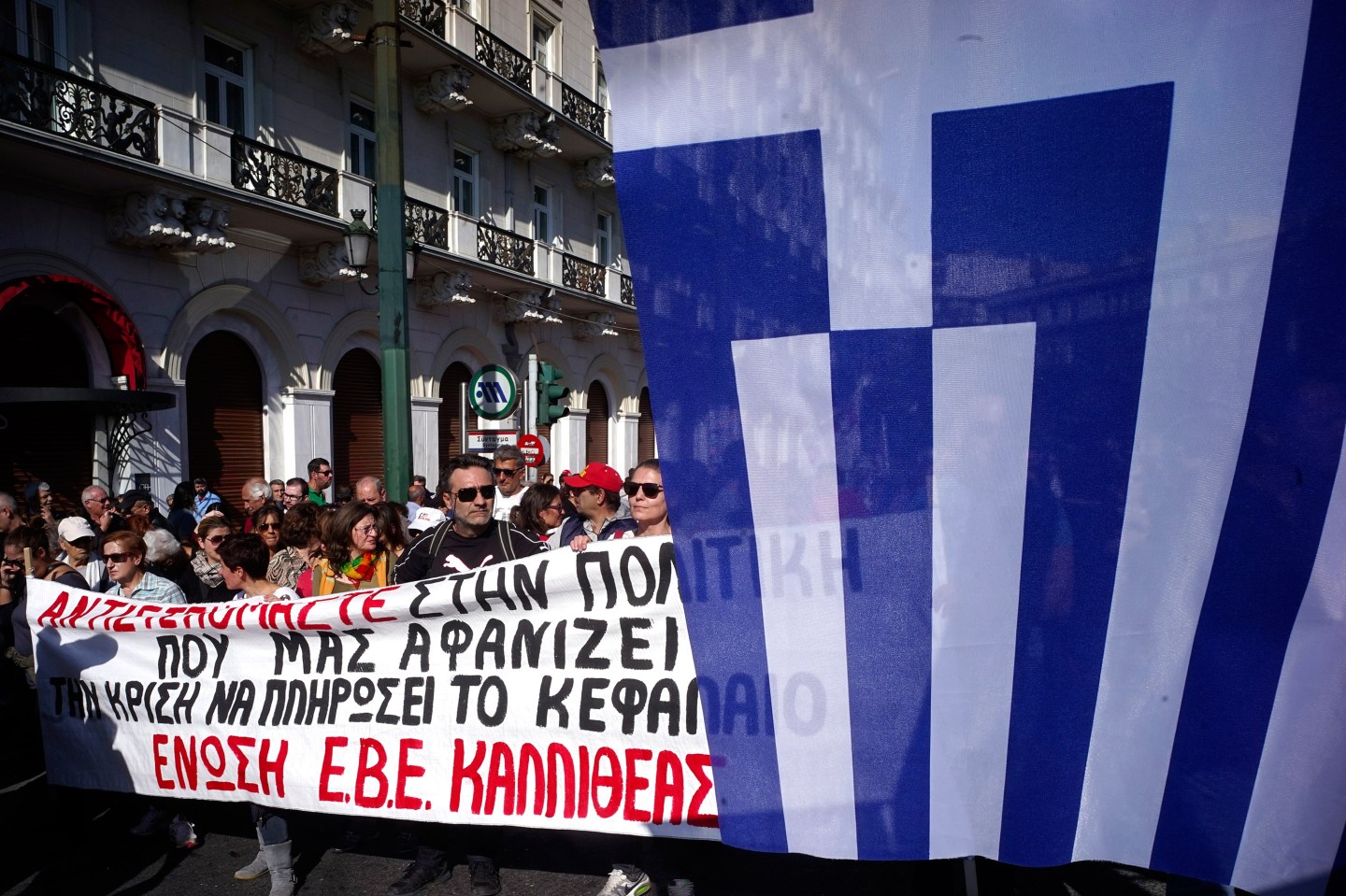 At a long anticipated meeting of euro-area finance ministers in Brussels this week, officials struck a preliminary deal with Greece to ease the country’s debt burden, paving the way for a 10.3 billion-euro ($11.5 billion) aid payout. If Greece’s debt story sounds similar to one you may have heard around this time last year and the year before, you’re right.

This ritual has become an established fixture in the European Union calendar, and usually involves some tough talk morphing into ambiguity and compromise, as behind-the-scenes negotiations thrash out the details of the inevitable last-minute agreement, which postpones big decisions for another year.

One key difference this time around was that rather than Greece asking for more money (the review simply approves the disbursement of the next tranches of the programme agreed last year), this year’s negotiations were mostly about the disagreements amongst its creditors over the long-term status of Greece’s debt burden. The IMF had been pushing for overt debt relief (although not involving its own loans), on the grounds that Greek debt is unsustainable and a drag on growth. On the other, the European institutions, and behind them the looming presence of Germany, insist that debt write-offs would set a dangerous and unacceptable precedent. Greece has already received abundant help, Greece’s European creditors argue, and it now must reform its economy and set about generating the growth needed to pay what it owes.

The agreement reached on Tuesday, as usual, entailed a compromise that postponed any definitive decision on Greece’s debt pile until 2018 at the earliest. The IMF had to climb down from its initial demands for immediate and unconditional debt relief in the face of German refusal to contemplate such a politically explosive step before the forthcoming federal elections next year. Yet the Fund’s Debt Sustainability Analysis, published just last week, cast a dismal judgment on Greece’s prospects under the current programme, dismissing any chance of the prospects of the country turning its debt-troubled economy around. But Greece’s European creditors simply ignored the IMF report, insisting that debt forgiveness was off the table. Once again, Greece and its creditors have kicked the can down the road.

As ever, politics stands in the way of a clear-headed assessment of how to revive the Greek economy. But this time, the fractious politics of Greece is the least of the EU’s worries. A more important reason for the obstinate refusal to contemplate a rational approach to the euro crisis is the volatile politics of the European Union’s Northern flank. The refugee crisis sparked by the conflict in Syria has heightened tensions over immigration in Europe’s creditor states, with nationalist and populist politicians fanning the flames of resentment amongst hard-pressed voters.

Bailout fatigue, added to suspicion of migrants (particularly Muslims), threatens mainstream political parties across the North, as Austria’s recent polarized presidential election, narrowly won by the Green van Bellen over far right candidate Hofer, demonstrates. German Chancellor Angela Merkel, still bruised by her humiliating climbdown over the refugee crisis, was anxious to avoid stoking the fires of nationalist resentment in Germany. Her hardline finance minister, Wolfgang Schauble, was happy to play the populist card to justify continued austerity in the euro zone, and especially for Greece.

And Greece’s Prime Minister Alexis Tsipras continued to navigate with great skill down the tricky path between satisfying creditors and securing access to funding, whilst cushioning his electorate from the harsh effects of the creditors’ demands. The bailout programme Greece signed up to last year came with a series of conditions, all of them politically and economically painful: the VAT (sales tax) was hiked to 24%; labour markets and union bargaining were to be reformed; and a series of state assets were to be privatized.

The rationale for these reforms was that by enabling Greece to stabilize its finances and improve its economic efficiency, the economy would grow and creditors would get their money back. But the reforms are for the most part anathema to Tsipras and his party Syriza, given its socialist ideology and concern for distributional issues. As a result, the government has little enthusiasm or commitment to the programme.

Not surprisingly then, the IMF reported that Greece’s implementation of reforms had fallen short, and the country’s likely growth would be insufficient for debt sustainability. Yet, Greece will continue to receive European financing, and its debt, if we believe the IMF, will continue to be unsustainable.

Tsipras’ government will likely remain in power, deep structural reform will remain elusive, and the parties will reconvene in a year’s time with the same problems on the table. Schauble will be able to claim that Germany has been generous with Greece, but will not be played a fool.

In the end, one could be forgiven for thinking that this arrangement suits everyone. Everyone, that is, except the long-suffering Greek population, and the eurozone as a whole, whose economic performance continues to underwhelm, held back as it is by uncertainty over how and when this debt crisis will ultimately be resolved.

Jonathan Hopkin is an associate professor of comparative politics at the department of government at London School of Economics.