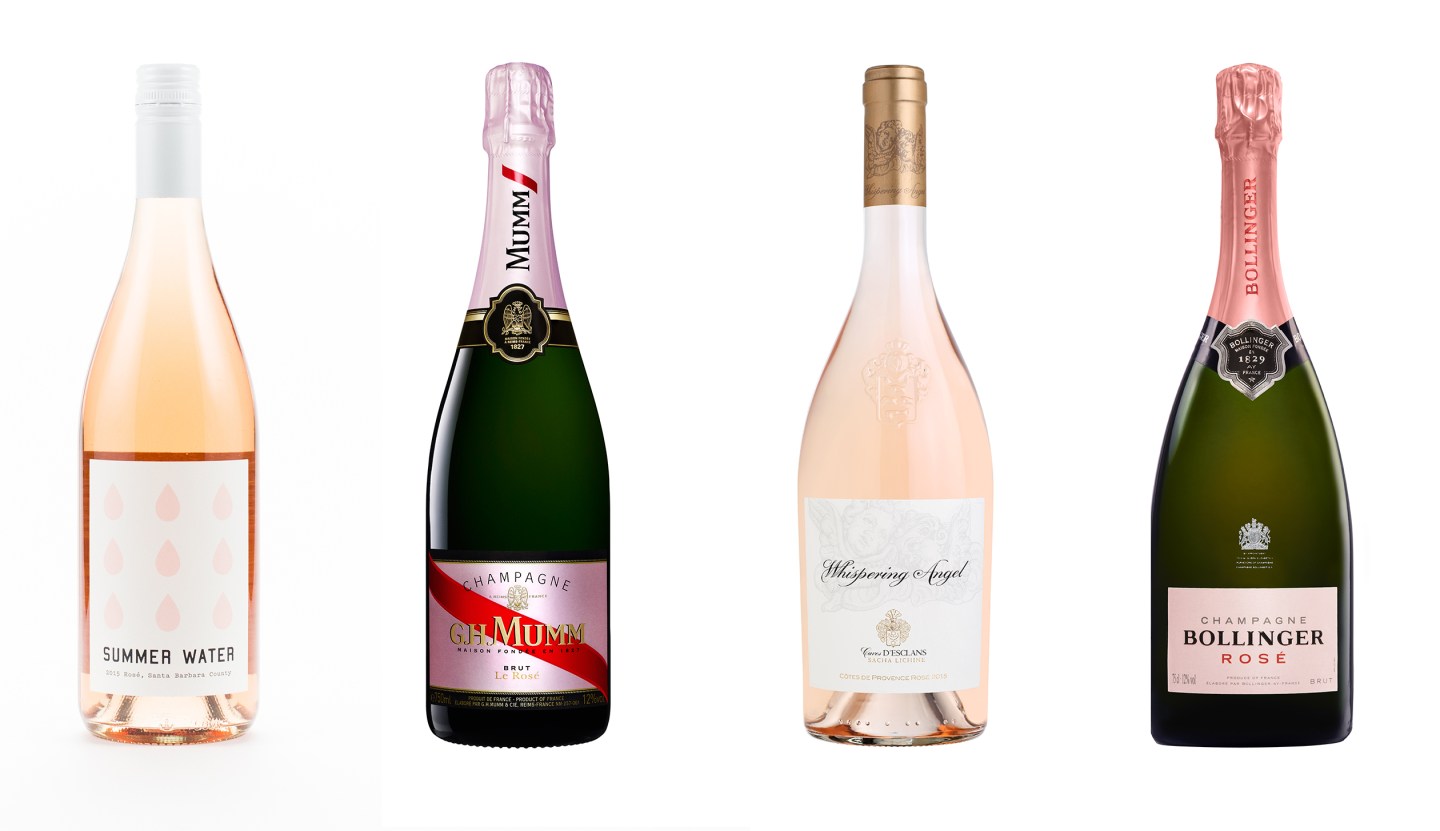 It is a boozy trend that has engulfed boisterous bros, the Hamptons ‘It’ crowd, and major Hollywood stars, including Drew Barrymore and Angelina Jolie. The beverage that unites them: Rosé, which is reporting sharp sales increases that far outpace the broader $38 billion wine industry.

Wine industry experts are lauding the popularity of rosé, saying it is a female-driven movement that has lured more men and found popularity beyond beach-front enclaves like the Hamptons and Miami. But executives contend interest in rosé doesn’t appear to be a fad, as it can now be found on many restaurant menus in almost every other major city in America. The popularity of the beverage category has resulted in hashtags (#brosé for bros that like the drink), fad brands (White Girl Rosé), and celebrity-backed extensions (the new rosés from actress Drew Barrymore).

“It is a fun product and I think, a real movement,” says Sacha Lichine, owner of Chateau d’Esclans. “A lot of people are trying to get into the rosé game.”

Lichine and many other rosé producers Fortune interviewed touted strong growth for their pink-tinted alcoholic beverages, which contrary to popular belief, can greatly vary in terms of sweetness and can even be noticeably dry. Chateau d’Esclans‘ Whispering Angel brand, which started a decade ago making just 10,000 cases globally, is expected to produce 360,000 cases this year – with over 200,000 sold in the U.S. alone.

“The reason we are successful is because of what is in the bottle,” Lichine says. “Something that is well made drives the category.”

He’s right. Data from Nielsen shows higher-priced rosés are reporting impressive double-digit growth, while the cheapest generic offerings aren’t performing as well. Rosé experts argue that the reason the beverage is so popular today is because producers are paying more attention to quality than they have in the past. While that has led to higher price points – Bollinger Rosé for example retails for about $80 – consumers are willing to open up their wallets for a better drinking experience.

Higher prices aren’t stopping consumers from diving into the rosé trend. Exports from the Provence region of France have exploded – soaring 58% in 2015 alone and up an incredible 4,852% from 2001 when just 158,300 liters hit the U.S. market. Last year, that figure exceeded 7.8 million liters.

Wine club startup Winc says year-over-year rosé orders have jumped 300% this year from 2015. While sales generally skew to the summer months, Winc has released more rosés earlier in the year. Funk Zone Rosé debuted in February and sold out in fewer than two months, while Summer Water, an early May debut, already sold out online.

Rob McMillan, founder of the Silicon Valley Bank Wine Division, said historically, rosé was viewed as a cheap generic wine offering, often highly sweet. It was consumed by Boomers in the 1960s and early 1970s but their taste buds evolved and eventually, that generation of drinkers moved on to white zinfandel and settled into favoring chardonnay. In the process, rosé was left behind and never really resonated with the next wave of drinkers, Generation X.

But McMillan sees a similar pattern emerging for millennials and their relationship with rosé. First, that generation favored prosecco and then leaned toward moscato. Neither fad lasted long. But the higher quality rosé options on the market today are attracting a new customers base that could mirror the long loyalty Boomers have shown to chardonnay.

“I don’t know that rosé will overtake chardonnay as the dominate wine,” McMillan says. “Moscato went away because it was a flash in the pan. But I think rosé, with the way it is being produced, is here to stay.”

Bigger players in the space are also paying attention to the trend. Champagne producer Bollinger mostly avoided the category until 2008, when it finally introduced a non-vintage rosé. Cyril Delarue, U.S. commercial director for Bollinger, says the brand’s rosé is selling strongly in hot markets like New York, Miami and the Hamptons, with demand so lofty it can be difficult to match. He also adds that while rosé sales slightly skew toward the summer months, the alcohol beverage actually is a strong performer throughout the year.

“Champagne is very skewed to the end of the year,” says Aygline Pechdo, champagne and sparkling wine brand director at Pernod Ricard, which produces G.H. Mumm champagne. “Rosé is helping us be a bit more top of mind outside the holiday season and those special occasion moments.” At G.H. Mumm, the rosé business is growing 40% from year-ago levels, albeit it is a tiny part of the overall business.

Pechdo, like many other experts, asserts that women drink more rosé but interest from men is increasing as they discover the beverage have more structure and body similar to a red wine.

“In the U.S., the consumer mindset remains that rosé equals sweet,” Pechdo says. “For the longest time, people might try to stay away from the category. But the fact is we have an opportunity to introduce dry rosé, and that can help the category overall.”