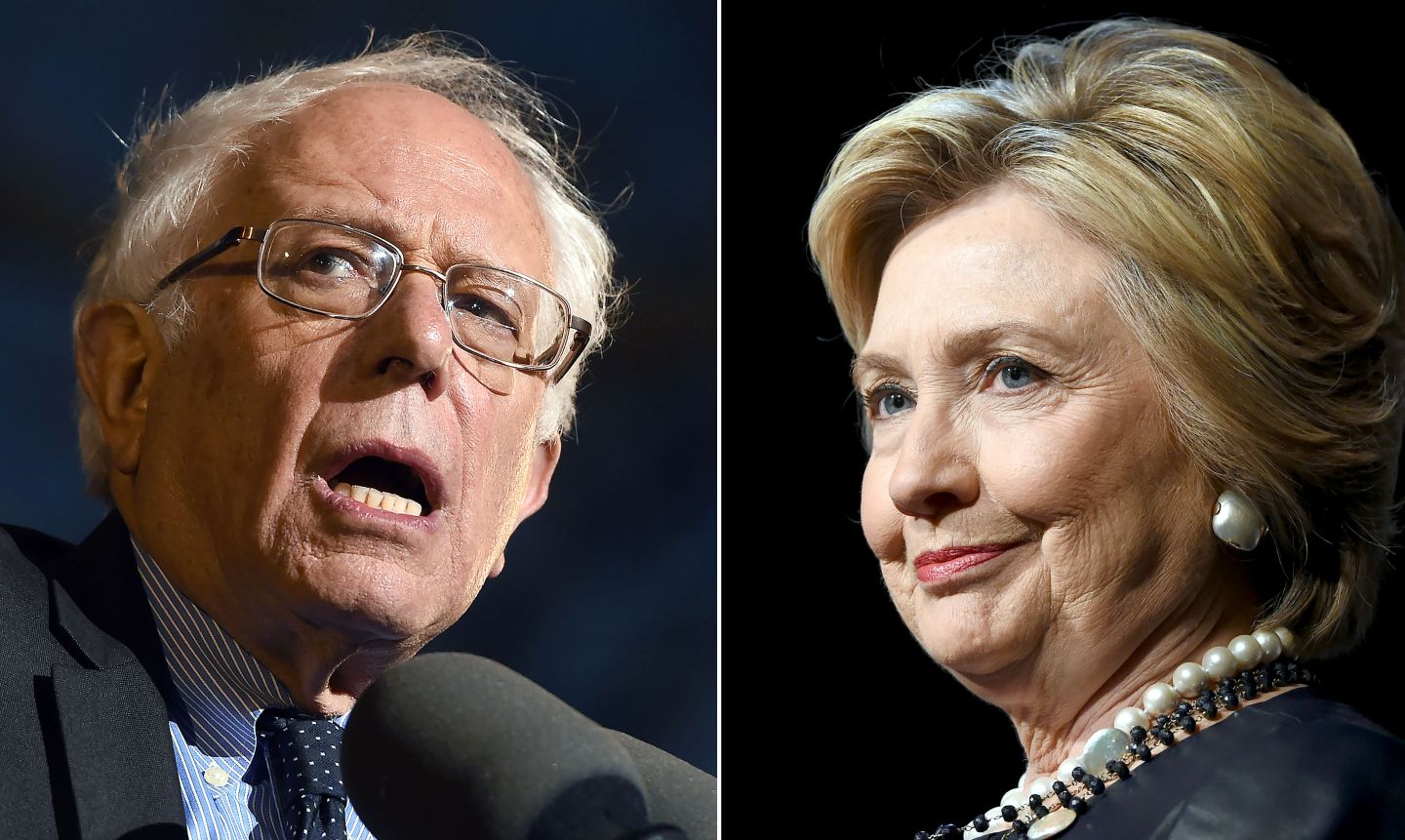 This combination of file photos shows Democratic presidential hopefuls Bernie Sanders(L)on March 31, 2016 and Hillary Clinton on March 30, 2016, US presidential primaries spark back to life April 5, 2016 after an eventful 10-day break. For Clinton, a loss in Wisconsin would be more symbolic than anything else, as the state distributes delegates proportionally according to the primary results. But she comes into the contest having lost five of the last six states to Bernie Sanders, and polls show him finishing on top in Wisconsin. / AFP / PHOTO DESK (Photo credit should read PHOTO DESK/AFP/Getty Images)
Photograph by AFP via Getty Images

Hillary Clinton is closing in fast on the Democratic presidential nomination.

After losing three of four state contests in May, Clinton has maintained a lead over Bernie Sanders of 271 pledged delegates won in primaries and caucuses.

She is steadily picking up more support from superdelegates, the party leaders who can back any candidate of their choice, dampening Sanders’ chances further even as he insists he can win them over later this summer. In the last week, Clinton picked up 12 new superdelegate endorsements while Sanders netted two, according to an Associated Press survey.

When including superdelegates, Clinton’s lead grows to 2,305, or 97 percent of the 2,383 delegates needed to win the nomination.

The Democratic primaries are now in a two-week break. They resume in the Virgin Islands on June 4 and Puerto Rico on June 5, with 67 delegates at stake.

Just 78 delegates short, Clinton remains on a glide path to reaching 2,383 on June 7 after polls close at 8 p.m. EDT in New Jersey.

Some things to know about the final weeks of the delegate race:

Clinton has won 23 states, while Sanders prevailed in 20. She also holds a razor-thin lead in Kentucky, where the race remained too close to call.

The last six states vote on June 7, followed by the District of Columbia on June 14.

Clinton won bigger primary states including Florida, New York, Ohio and Pennsylvania and also posted blowout victories in the South. That has given her a substantial lead in delegates over Sanders based solely on primaries and caucuses, 1,768 to 1,497. Sanders was successful in smaller caucus states and won Michigan and Wisconsin.

Clinton also holds an advantage of roughly 3 million raw votes, based on AP’s tabulation — 13.2 million to nearly 10.2 million for Sanders. The vote totals do not include Iowa, Nevada, Maine, Alaska, Washington and Wyoming — caucus states where the AP tabulated delegate equivalents, not raw votes; Sanders won four of them.

After a strong April finish that put her 91 percent of the way to the nomination, Clinton was slowed by a lighter primary schedule and wins by Sanders in Indiana, West Virginia and Oregon. She still picked up more than 45% of the delegates at stake in May. That’s because Democrats award delegates in proportion to the vote, so the loser receives some.

In the Virgin Islands and Puerto Rico, Clinton is likely to grab around 40 delegates. That will leave her shy by more than 30, heading into June 7.

With 126 pledged delegates at stake, New Jersey offers Clinton more than what she needs to clinch — even if she were to lose the state.

Also voting June 7, in order of poll close times: North Dakota, South Dakota, New Mexico, Montana and California. A total of 694 delegates are up for grabs.

Winning a Majority of Pledged Delegates

Because of Clinton’s big lead, Sanders must flip her superdelegates if he hopes to reach 2,383.

But first, in order to sway them, Sanders will have to win a majority of pledged delegates from primaries and caucuses, his senior strategist Tad Devine has acknowledged. Superdelegates have never before lifted a candidate to the nomination when he or she trailed in the number of pledged delegates.

“I know that it is a steep road,” Sanders said at a recent campaign rally, “but if we do very, very well in New Mexico, California and the other states on June 7, my hope is that we end this process with 50 percent plus one of the pledged delegates.”

Sanders is far behind on that front.

Clinton is on an easy path to reach 2,026 pledged delegates — or more than half the 4,051 total — on June 7. She will get there even if she loses solidly in all six states.

Sanders needs more than 67% of the remaining pledged delegates to overtake her, requiring landslide victories.

Clinton holds a substantial advantage in superdelegates — 537 to 42.

There are 714 superdelegates, meaning 135 have yet to commit.

What’s up with them?

Many are state party chairs, vice chairs or top officials such as President Barack Obama, who are declining to publicly express a preference for now. Others say they are waiting until their state’s primary or caucus are complete.

If three dozen more superdelegates decide to back Clinton in the next two weeks, she’ll reach 2,383 before the last states vote.

Among superdelegates who already support a candidate, two have flipped — but not in the direction Sanders would like. Emmett Hansen of the Virgin Islands switched to Clinton, citing the specificity of her policy proposals. In Puerto Rico, Luisette Colon was an early Clinton supporter before becoming uncommitted; last week, she flipped back to Clinton.