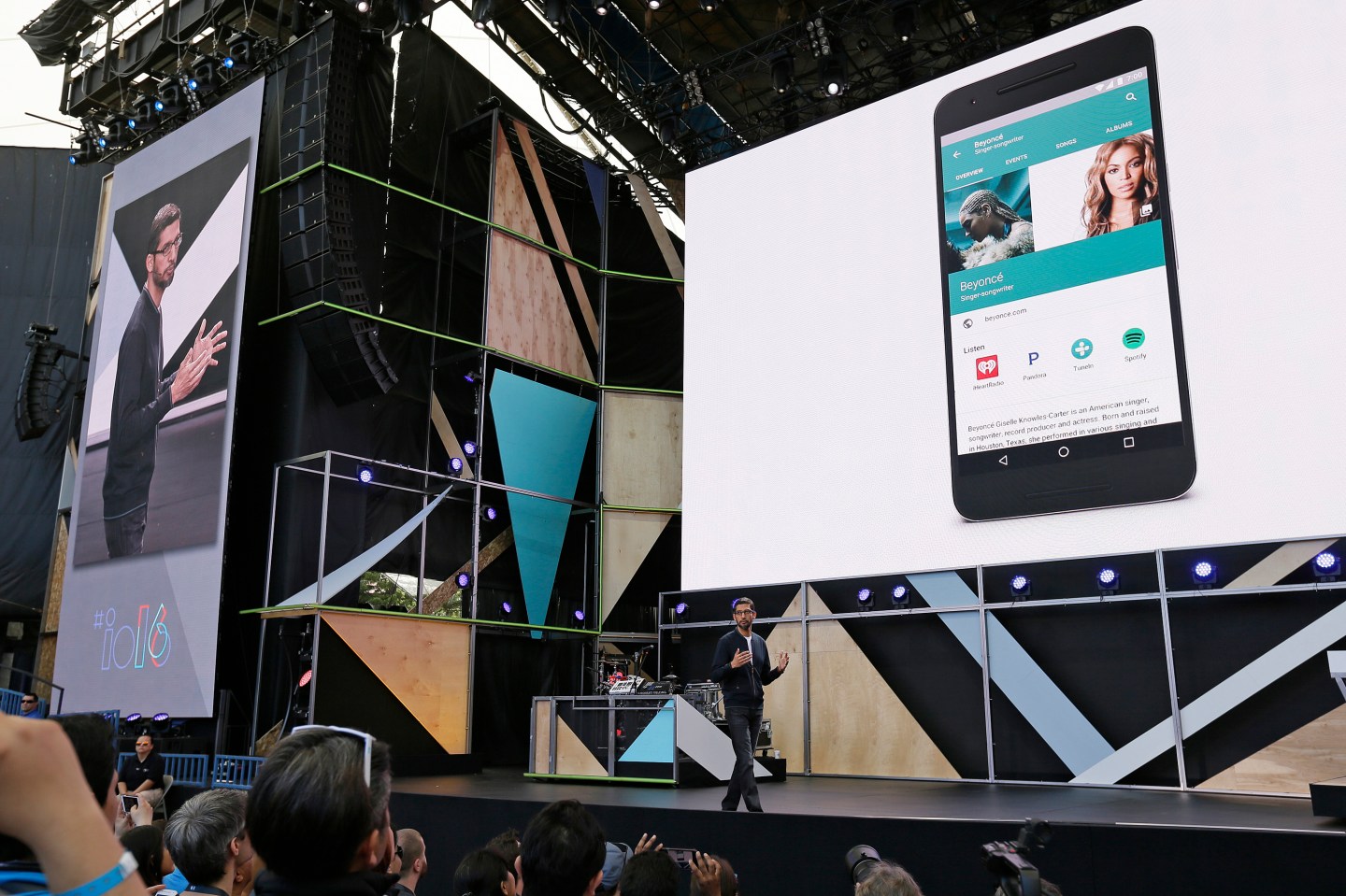 With widespread adoption of smartphones and tablets, more people are accessing websites than they ever. But that doesn’t mean that going online using a mobile device is always a pleasant experience.

From the sometimes excruciatingly long wait for websites to load on smartphones to the annoying ads that hog screens, surfing the web on a phone can sometimes be a chore. To fix the problem of slow-loading mobile websites and often obnoxious online advertising, Google (GOOG) is embarking on an ambitious plan to convince media companies and web publishers to alter the software code powering their sites.

Over the last three years, the search giant has been working to standardize the underlying software code that runs mobile websites. The idea is that if Google can convince website operators to switch to something more efficient, the speed of mobile websites will increase while letting web publishers add new features like messaging services and notifications.

Of course, the advent of mobile apps—like the one Facebook (FB) built—has made visiting Internet sites more pleasant for consumers. That’s because these mobile apps were specifically designed to take advantage of the smartphone with all of its unique properties, such as a touch screen and ability to connect to the Internet via cellular networks.

Standard websites, however, were never intended to be accessed from smartphones or mobile tablets, explained Rahul Roy-Chowdhury, Google’s vice president of product management for Chrome. Many of these websites were developed when the Internet was still in its infancy, and they were built to accommodate “big, bulky desktops,” he said.

Meanwhile, each time online publishers decided to add new features to their websites like cookies designed to track users, they had to add more software code in the background. Coupled with the rise of online ads, the software code powering these websites have become bulky and unwieldy.

Essentially, Google wants to do away with all of this excess software code. But the search giant can’t do it alone. It needs multiple parties, from online publishers to Internet advertisers, to help out.

Last fall, Google revealed its Accelerated Mobile Pages, or AMP, project designed to boost the speed of news articles for online publishers like The Guardian and The New York Times. This spring, Google revealed the second phase for its mobile web-cleaning project, called the Progressive Web App, or PWA.

If AMP focused on cleaning up the code behind individual news articles, PWA takes it a step further and cleans the code of the entire website. Roy-Chowdhury likens progressive web apps to a tree and AMP articles as leaves.

The PWA project is intended to help website operators to imbue their mobile websites with features typically associated with mobile apps, like the ability to notify users on their phones when something on the website changes. Another bonus is making it easier for users to make mobile payments.

But most important, PWA is meant to improve speed and usability. Flipkart, the India-based e-commerce giant, converted its mobile website to PWA and found that its users spent three-and-a half minutes perusing its website on phones compared to 70 seconds before. This ultimately resulted in more people buying more products.

Typically, it takes 3.2 seconds for a normal webpage to completely load on a phone, Prakash said. But when the Post switched to AMP (including the ability to store so-called caches of a limited number of news articles on Google’s servers), the loading time decreased to 400 milliseconds, Prakash said.

A product manager at The Washington Post showed off a demo of AMP and the PWA-version of the newspaper’s mobile website on Thursday at Google’s annual developer conference, Google I/O, in Mountain View, Calif. In the demo he searched for a Washington Post news article from his phone, and was then taken to an AMP page.

He then clicked on a menu item at the upper left hand of the article that said “PWA.” After clicking on the PWA tab, he was redirected to a souped-up version of the Post’s website, which resembled an app-like interface that loaded quickly and contained large photos accompanying each news story.

Still, the PWA is a demo, and the Post hasn’t quite figured out a way to promote the PWA version of the mobile site to users when they visit an AMP article, Prakash explained. Why, for example, would users want to click on something called “PWA” if they have no clue about what the acronym stands for or what it accomplishes? It’s still the early days, and there are kinks to be ironed out, especially as the Post still works on its PWA integration.

Although Google’s intentions to boost the speed of mobile websites could help publishers and e-commerce websites, Google also stands to benefit if the project catches on. Google’s core business still comes from search advertising, and if more companies decide to concentrate on mobile apps instead of mobile websites, the search giant could see a slowdown in search advertising revenue.

But those companies have the resources to develop powerful mobile apps, whereas smaller businesses may not be as lucky, Dischler said. The PWA project gives smaller companies the ability to create more flexible mobile websites as opposed to being forced to dedicate time and money on building both apps and mobile sites, he argued.

Still, most consumers in the U.S. seem to prefer spending time in mobile apps, especially those from just a few companies, Google included. It’s unclear if Google’s ambitious project will alter the online habits of mobile users.

Additionally, although news pages that have been altered to both AMP and PWA load faster, the tweaked coding standards offsets some of what publishers and advertisers can do to create customized content for their mobile websites. A pop-up advertisement may be annoying to one person, but it could represent a source of revenue for a dwindling media industry desperate for cash.

David Besbris, Google’s vice president of search engineering, concedes that the project is an “opinionated framework” in which Google (with the input from advertisers and website operators, it should be noted) has determined that there must be a change in the way software code runs mobile websites.

Some media critics have attacked Google for unilaterally determining the best way to display web content on smartphones. That’s not even taking in account the online advertisers that will have to change the way they do online ads for mobile phones.

“The larger challenge will be to get the entire [advertising] agencies to produce creative that conforms to AMP and the native web,” said Prakash.

Google argues that there’s a “rising tide that lifts all boats” mentality involved, and if website speed increases, more advertisements will be served. However, it’s unclear if the revenue generated from the increased advertising would eventually eclipse the revenue lost from those annoying advertisements that Google’s AMP and PWA project no longer tolerate.

Regardless, Google needs this project to take off if it wants to ensure that its search dominance continues. If surfing the web on a mobile browser is a pain, why not just use an app? Google contends that many website operators stand to benefit from AMP and PWA, and if their mobile websites are better performing, consumers will ultimately be happy.

Of course, so will Google.