Taco Bell Is Going Upscale for Your Next Dinner Date (Seriously) 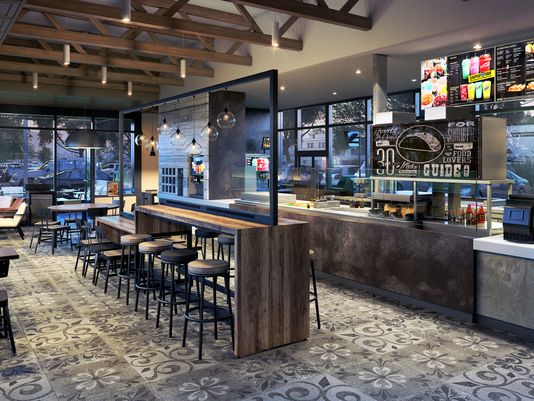 Taco Bell will debut four new store design concepts that aim to create an upscale experience of the traditionally casual fast-food chain. It’s hoping that its new sleek, modern look with trendy lighting and exposed wooden beams can convince diners to make a run for the border instead of going to other fast-casual chains like Chipotle (CMG).

The move is part of Taco Bell’s initiative to bring in a strong dinner crowd, reported USA Today. The chain has a steady lunchtime clientele and has built up a strong breakfast business in recent years, but traffic tends to dip around dinnertime. Taco Bell, part of YUM! Brands (YUM), sees a key opportunity to expand sales: creating a new fast-casual experience that will attract diners for the final meal of the day.

“We hope that we see a renewed interest in actually using it as a place to go out to dinner vs. picking up convenience and food to go home,” Deborah brand, vice president of development and design at Taco Bell, told USA Today.

The new concept restaurants will ditch the chain’s fluorescent lighting and neon purple signage for a more grown-up look. It’s less about convenience and more about ambiance. Taco Bell is ditching the bolted-down tables and chairs for friendlier group seating that doesn’t feel like typical fast-food dining and opting for touches like cushioned furniture and options for “al fresco” dining. The chain has no plans, as yet, to offer a different menu.

Four current stores will debut the new look in Orange County, Calif. this summer, and another four will open later in the year. Taco Bell plans to eventually roll out the new look to every store. The chain currently has more than 7,250 restaurants worldwide.