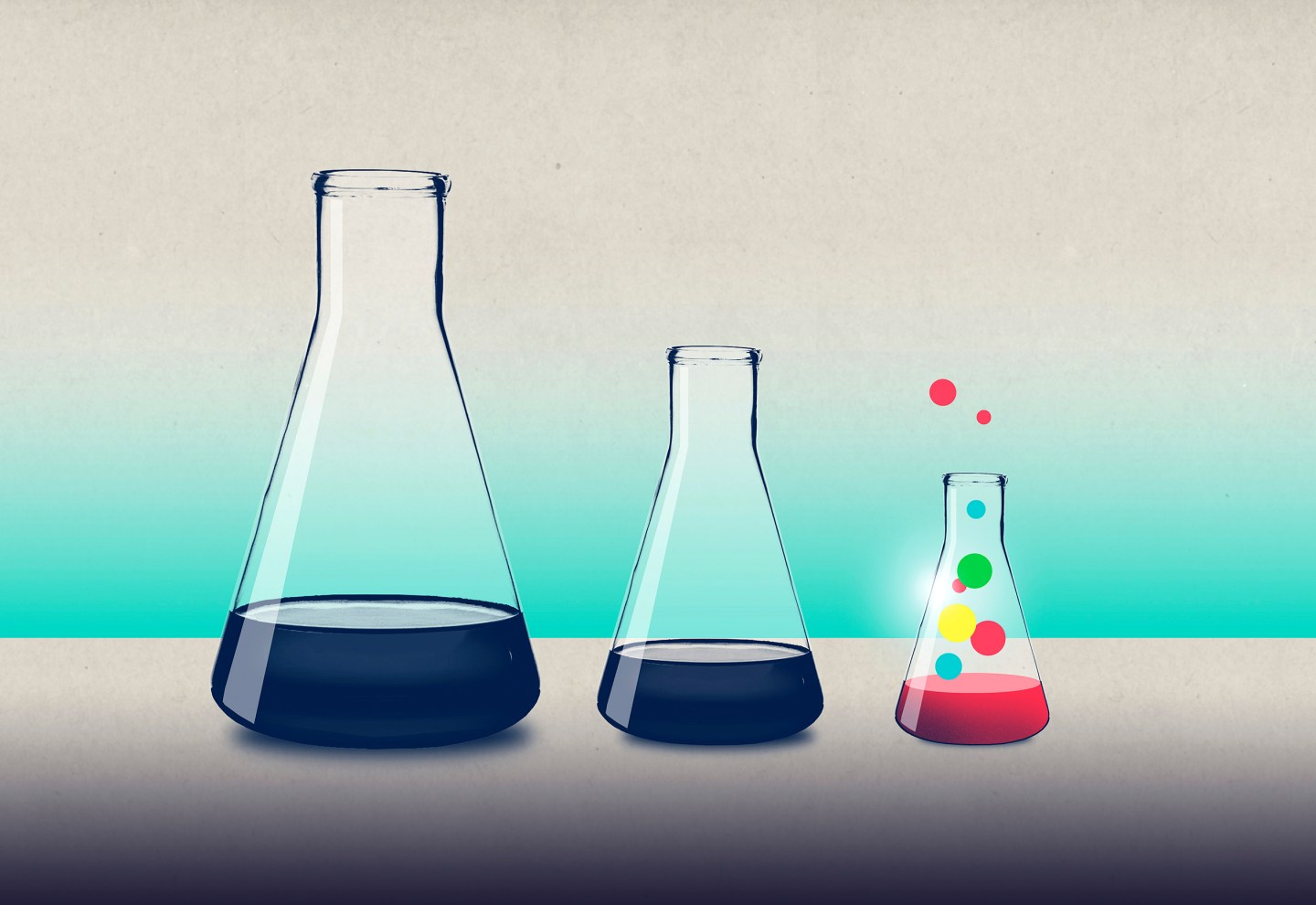 So when a venture capitalist called last fall asking her to lead a small cancer startup, she jumped at the opportunity to focus on a single drug—with no bureaucracy or politics. Richon became president of Ribon Therapeutics, which is still in stealth mode. “At a small company,” she says, “it’s so much more about the science, and that’s so much more satisfying to me.”

Her story is becoming ever more common. Top execs have always traded the comforts of big pharmaceutical companies to lead biotech startups. But it’s now happening at a much faster pace, say biotech recruiters and analysts. Two reasons: The upstarts have plenty of cash, and increasingly they generate the lion’s share of innovative drugs. The shift is further fueled by rapid consolidation among the giants, shake-ups inside R&D departments, and succession planning inside big companies, says Graham Galloway of Spencer Stuart.

Among the many to make recent jumps from the mammoth to the minuscule are former Biogen (BIIB) R&D chief Doug Williams, who became CEO of cancer startup Codiak BioSciences, and Don Nicholson, who left Merck to lead Nimbus Therapeutics. Jeremy Levin, ex-CEO of generic giant Teva Pharmaceuticals (TEVA), became head of Ovid Therapeutics, targeting rare neurological diseases. Says biotech recruiter Jackie Bandish: “For many of these guys, a small company can be a breath of fresh air.”

A crucial part of the allure: Pint-size ventures are driving pharma innovation. The majority of drugs approved in recent years originated at smaller ­outfits—64% of them last year, according to HBM Partners, a health care investing firm.

Giants like Pfizer (PFE) have tried to become more entrepreneurial, and some behemoths have beefed up R&D. Yet rarely do they conduct early scientific research anymore. Increasingly, the big players leave that to startups, then later cut deals to acquire or license the drugs. “Biotech is becoming more important than ever to Big Pharma and becoming the fuel source for their drug pipelines,” says Nicholson, who once scouted for such acquisitions at Merck. Small companies received $5.6 billion in upfront licensing payments in 2014, double the prior year, according to the trade group BIO.

Small companies offer the classic high-risk, high-­reward dichotomy: a lot of the former, and handsome payouts in the case of the latter. Tony Coles, who spent 22 years at Bristol-Myers Squibb (BMY) and Merck, walked away with $62 million after serving as CEO of Onyx Pharmaceuticals, which was acquired by Amgen (AMGN) in 2013 for $9.7 billion. (Coles has since launched another startup.) Former Amgen executive Terry Rosen started Flexus Biosciences and sold it 17 months later for $1.3 billion. (His share was undisclosed.)

It helps that investor money has flooded in, aided by FDA efforts to accelerate approvals for breakthrough drugs. Last year venture capitalists sank a record $7.4 billion into biotechs, the largest sum in the 20-year history of the PwC MoneyTree report.

For more on biotech, watch this Fortune video:

Biotech is still hot, says PwC partner Greg Vlahos, but the pace has slowed. He expects funding to top $5 billion this year, and because many companies are well capitalized, they can afford to commercialize therapies even if the IPO market doesn’t open up. “If anything, the flow of people to biotech startups may accelerate,” says Erik Gordon, a clinical assistant professor at the University of Michigan’s Ross School of Business, “because that’s where they can make big stuff happen.”

That’s what happened with Jeff Jonas. As an exec at Shire (SHPG), which with $6 billion in revenue is one of the smaller Big Pharmas, he spent months persuading leaders and commercial and supply-chain people to launch a clinical trial for the ADHD drug Vyvanse to treat binge eating. At his startup Sage (SAGE), Jonas says, his team decided in a day to launch a postpartum depression trial for one of its drugs. “It’s the chance to work unfettered—where everyone is rolling in the same direction—and the chance to do something big and unexpected,” he says. “Who wouldn’t want that kind of privilege?”

A version of this article appears in the June 1, 2016 issue of Fortune with the headline “Big Innovation in Small Places.”