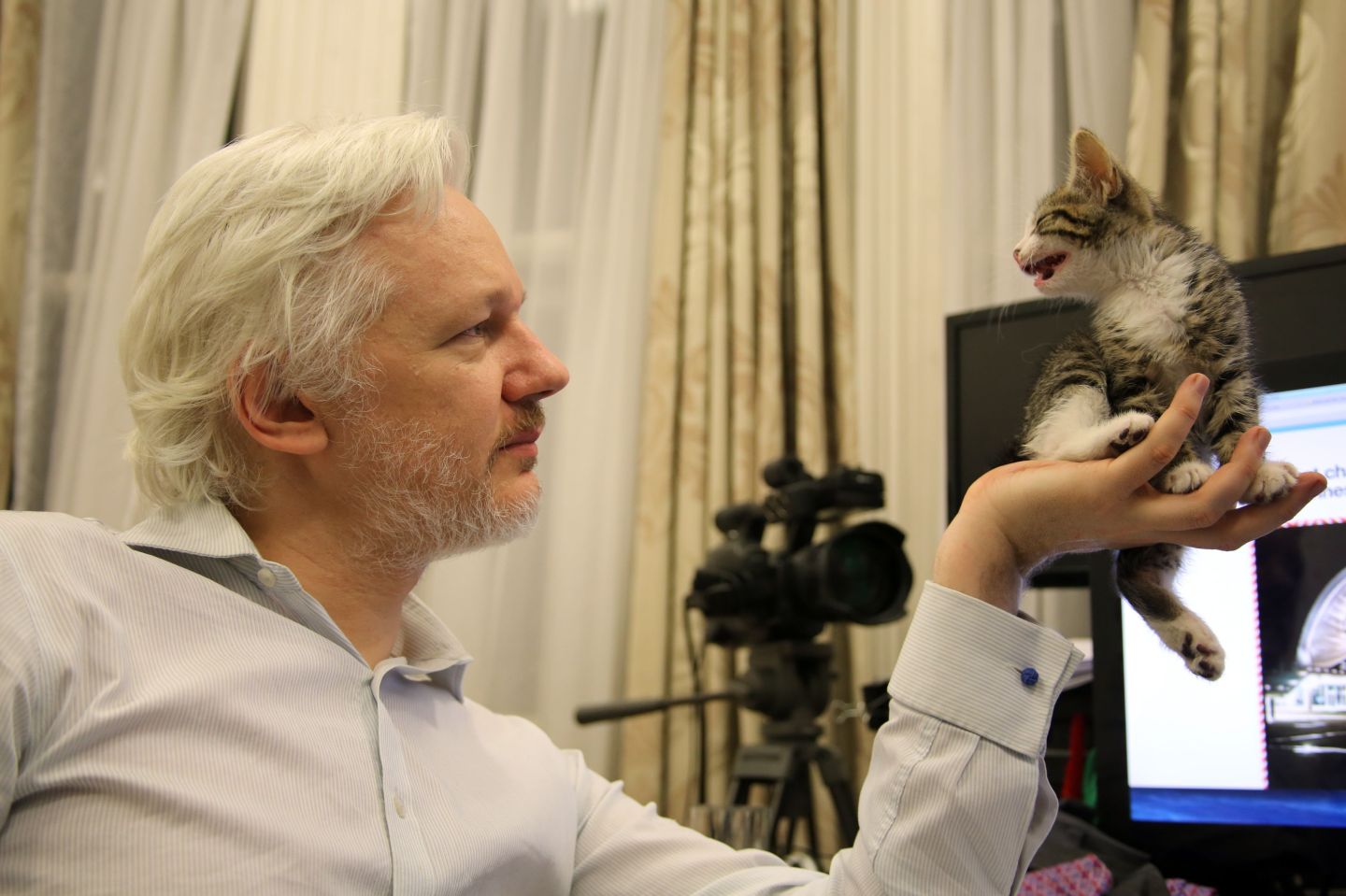 This is an undated handout photo issued by Sunshine Press made available Tuesday May 10, 2016 of WikiLeaks founder Julian Assange with a kitten in Ecuador's embassy in London . It may not be so lonely for WikiLeaks founder Julian Assange in the embassy quarters he's called home for nearly four years. Now he has a kitten to keep him company.The kitten had not been named yet. (Sunshine Press/Wikileaks via AP)
Sunshine Press/Wikileaks via AP

The pet, a gift from Assange’s children, has no official name yet, reports the Daily Mail. On Twitter, however, the 10-week-old kitten goes by @EmbassyCat.

“I live in the Ecuadorian Embassy with Julian Assange,” the cat’s Twitter bio reads. “Interested in counter-purrveillance.”

Assange has been holed up in the Ecuadorian embassy in London for four years, facing extradition to Sweden for even longer. Swedish authorities have been seeking his extradition since 2010 for questioning following allegations that he sexually assaulted two women, which he has denied.

Assange refuses to leave the embassy for fear that doing so will lead to his arrest and extradition to the United States on potential charges for his role in disseminating state secrets through WikiLeaks.

Since its founding a decade ago, WikiLeaks has published confidential documents stolen from sources such as governments (like the U.S.’s massive diplomatic cables leak), corporations (like the Sony (SNE) Pictures data dump), and public figures (like top U.S. intelligence officials’ hacked personal email accounts). Say what you will about Assange and his uncompromising brand of Internet activism—the cat is undeniably cute.

Here are some of the Embassy Cat’s Tweets:

Welcome! Cat got your chin-rest?

No, Embassy Cat! Don’t be fooled!

(Fun fact: the British stopped stationing police outside the embassy in the fall, after spending a reported £12.6 million.)

Confirmed: Even more adorable from the front.

Better stretch. You might be cooped up in that office for…a while.

Already plotting a getaway? And without an escape dress??

In February, a United Nations panel said that Assange is being “arbitrarily detained” and that his confinement “should be brought to an end.” The Swedish Supreme Court, on the other hand, doesn’t appear to agree.

At least he’s got some company now.