Blocking Ads Across Desktop and Mobile Is Now Easier, Thanks to Opera 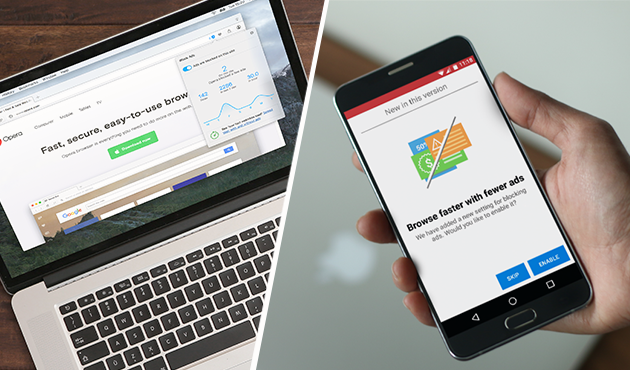 A couple months after it introduced baked-in ad-blocking to the test version of its browser, Opera(OPESY) has now rolled out the feature in its standard desktop browser, which is used by around 60 million people.

What’s more, the same feature is now built into the Opera Mini browser for Android devices. It is getting much easier for people to block ads and deprive website operators of much of their funding.

Opera CEO Lars Boilesen said the feature made Opera’s desktop version 45% faster than a combination of Google’s(GOOG) Chrome with the Adblock Plus extension, due to its inbuilt nature.

“Opera is the first browser company to offer a native ad blocker across devices,” he said. “We do this because we want to provide people with the fastest browsers in the market.”

The company said the feature speeds up page-loading on the desktop by 89%, and in Opera Mini for Android by 40%. Ads don’t just take time to load, of course; they also use up data, which can be more of a concern on mobile.

Then there’s the fact that ads can often be a privacy worry, due to the fact that many track people by depositing cookies in their browsers.

For more on ad-blocking, watch our video.

This isn’t the only privacy move Opera has made recently. It also introduced a free virtual private network (VPN) feature to its test version recently. However, experts have pointed out that this is not a true encrypted VPN, and those wishing to surf the web with caution should still use a proper VPN.