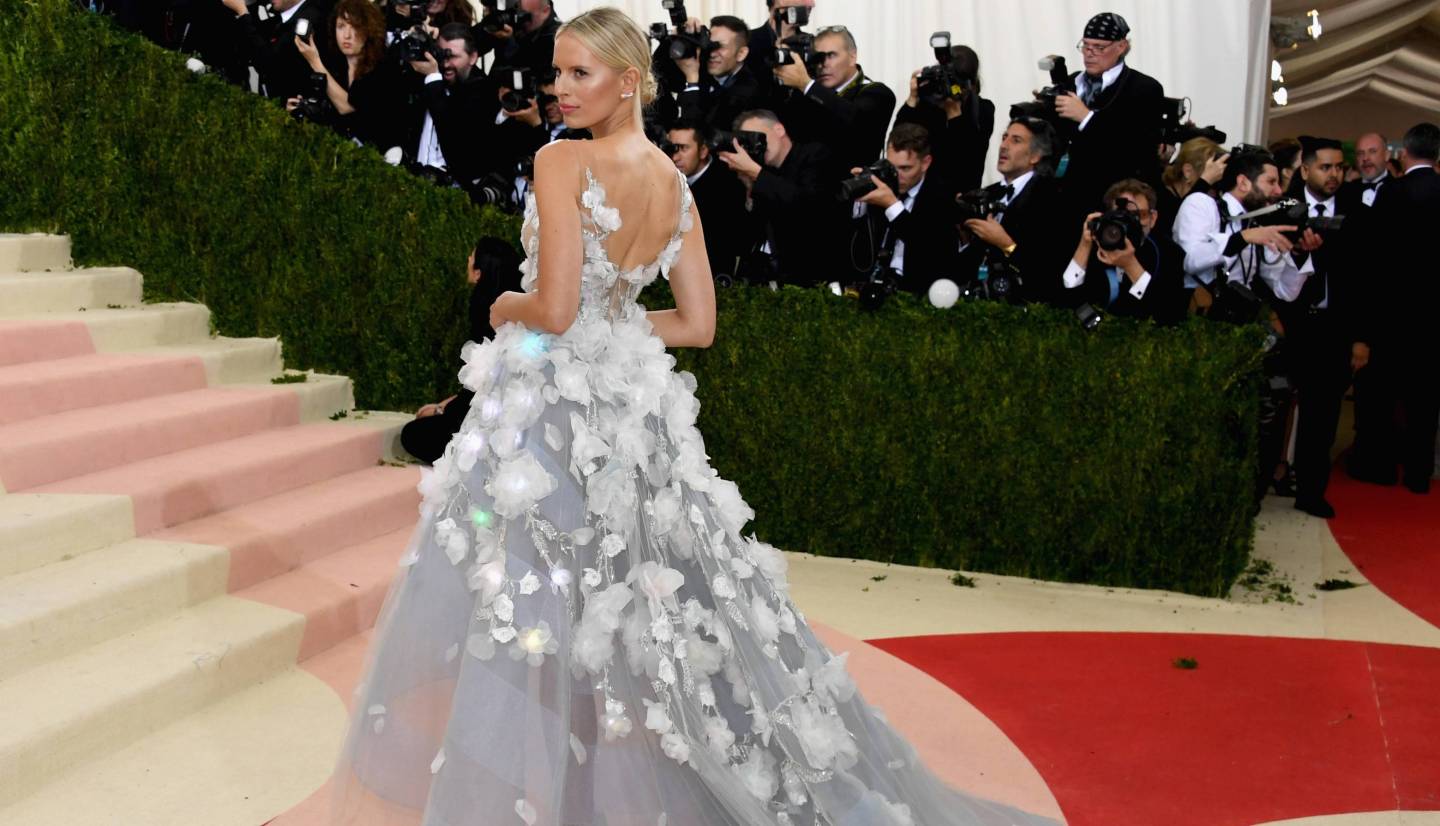 Officially titled The Metropolitan Museum of Art’s Costume Institute Benefit, the gala is the organization’s primary funding source for exhibitions and other expenses. This year’s red carpet had more metallic sparkle and futuristic looks on display than ever, as guests dressed to kick off the Met’s spring exhibit, “Manus x Machina: Fashion in an Age of Technology.”

It wasn’t only visual, as with Taylor Swift and Lady Gaga’s space traveler looks, but integral: Claire Danes wore a light-up ball gown, while Emma Watson’s Calvin Klein off-shoulder pantsuit with its dramatic train was made from recycled water bottles and fastened with recycled plastic zippers. Model Karolina Kurkova wore a “cognitive dress” designed by Marchesa’s Georgina Chapman and Keren Craig and IBM’s cognitive computing system Watson. The “smart” dress is embedded with IBM Watson technology and LED lights that change colors in real time, dependent on the social media mood of users commenting on the gala through Twitter.

Please comment on all of my social accounts b/c my dress will react to your emotions! #MetGala @IBM @MarchesaFashion pic.twitter.com/CXUKcVd8Hm

Manus x Machina explores haute couture and avant-garde ready-to-wear that display the union of the hand (manus) and machine (machina) work. Especially in this age of global mass production, there can be a perception that “made by hand” by default means made with more care, but the truth that emerges through more than 170 garments in the exhibit is that technology and handmade processes have worked in tandem for over a century with stunning results.

The spring exhibition was “made possible by Apple,” with “additional support by Conde Nast.” Apple’s Chief Design Officer Jony Ive spoke at the press preview to make the connection between his company’s own work, with its goal of creating objects as beautiful as they are functional, and the exhibition.

The role of technology is often questioned, resisted, or criticized, but as Ive noted, “once even the simple metal needle challenged the conventions of the time.”

“Technology and craft are not at odds, and much like beauty and utility, they go hand in hand. Often the result is more powerful for the combination.”

The exhibition is presented in cathedral-like galleries with ethereal background music, divided into sections displaying exceptional embroidery, feather work, artificial flowers, pleating, leather work, and lacework, featuring examples of each technique across eras from the dawn of mass production. “Manus X Machina: Fashion in an Age of Technology” opens May 5 and runs through August 14.

Appearing simultaneously organic and manufactured are two versions of a pret-a-porter dress by British designer Gareth Pugh, each one covered in hundreds of vertically aligned drinking straws, one using black straws and one clear. From afar, the straws evoke locks of shaggy hair, almost like a yak. Close up, it’s revealed to be mass-produced fast-food plastic dining utensils.

Silicone FeathersCourtesy of the Metropolitan Museum of Art/Nicholas Alan Cope

A pink 2013 dress of silicone feathers by Dutch designer Iris van Herpen has three menacing gull skulls looming like gargoyles from each shoulder and one arm, fit for a crazed supervillain.

A trio of matching 1930s micro-pleated gowns in rose, cerulean blue and green, they form enchanting columns of radiant silk.

In the same section dedicated to pleating was this collapsable dress looking like various colored paper lanterns had melded into three branches—it's the 1994 “Flying Saucer” dress by Issey Miyake (who was born in 1938, just about the same time as the above trio of gowns).

Another striking look from designer Iris van Herpen, this pret-a-porter number is from 2011-12, and an example of the possibilities of 3-D printing in fashion.

Created as an Autumn 2012 haute couture dress, this wearable epoxy and resin leaf pile is another unique look by Iris van Herpen.