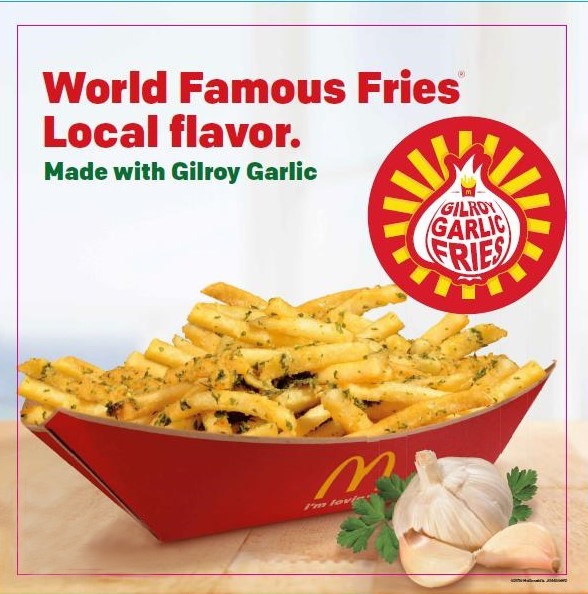 McDonald’s (MCD) is trying to improve on its iconic French fries by adding garlic to the mix.

The fast food restaurant announced that it began testing Gilroy Garlic Fries in the San Francisco Bay Area. According to a press release, they’re made to order and are tossed with a garlic puree that’s made up of chopped garlic, olive oil, parmesan cheese, parsley, and salt.

The name of the new menu item, Gilroy Garlic Fries, refers to Gilroy, California, where the garlic is grown. About 80 miles south of San Francisco, the city is often called the “Garlic Capital of the World.” The garlic specifically used by McDonald’s comes from Gilroy’s fourth generation, family-owned Christopher Ranch.

The chain says that testing garlic fries is “part of a trend at McDonald’s the experiment with regional flavors and food on its menu.” McDonald’s also recently returned Johnsonville Brats, a sausage brand made in Wisconsin, to select menus in the state.

“The response from our customers has been very positive,” McDonald’s franchisee Nick Vergis said in the press release. That could mean good news for other McDonald’s fans located in the Bay Area. The fast food giant said that if it receives positive feedback from customers, Gilroy Garlic Fries could be in nearly 250 locations come August.