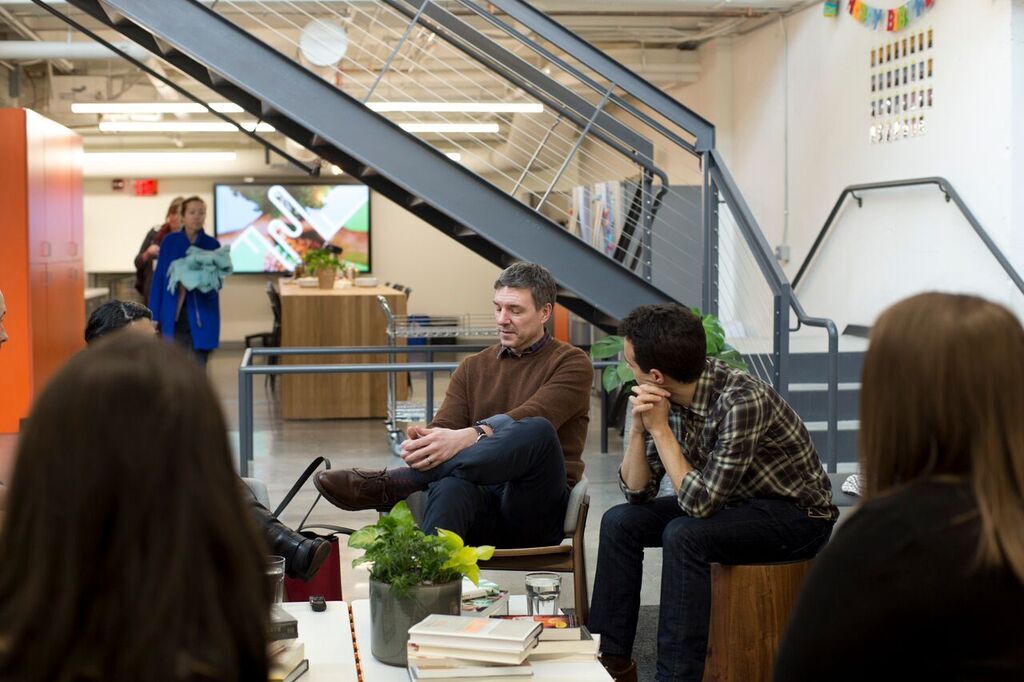 After spending years as a product manager at Amazon, PayPal and Rosetta Stone, West Stringfellow, 37, decided to take a 10-month vacation and travel. During a trip to Los Angeles, he took full advantage of the fact that, for the first time in nearly a decade, he wasn’t working in a straight-edge corporate environment. He left L.A. with two diamond studs in his nose.

The piercings were meant to serve as a protective barrier against accepting yet another position at a big company. And yet when he returned home to San Francisco, a friend encouraged him to speak with a recruiter from Target about a new “entrepreneur-in-residence” position. To Stringfellow, working for a 50-year-old physical retailer sounded like “career suicide.” He took the call to be polite, but deliberately led with the story of getting his nose pierced.

“I was really hoping [the recruiter] would say, ‘Yes, that will totally affect your candidacy,’ so I could be like, ‘OK, now I have a legitimate excuse not to talk to you,’” Stringfellow says. “But he said, ‘No, I actually think that’s a perk.’”

Together with David Law, a 49-year-old entrepreneur who has launched more than 10 companies, Stringfellow and Shewmaker were ultimately persuaded to join Target and head up its Entrepreneur in Residence (EIR) program. Launched in March of 2015, the program serves as an in-house incubator for disruptive business ideas. The goal: To help Target, with its nearly 1,800 stores and 340,000 employees, think like a startup.

“I think we were all very skeptical,” Shewmaker says. “But at the same time, we were all curious enough to give it a shot. If you can truly build a business on the back of the giant, you can do some pretty big things.”

Looking to venture capital for inspiration

EIR programs are common at venture capital funds (Accel Partners, Battery Ventures), large companies (Google Ventures, Dell) and universities (Harvard Business School, MIT), but they are more rare in the retail industry. Casey Carl, Target’s chief strategy and innovation officer, said he got the idea for hiring in-house entrepreneurs after a meeting with a venture capitalist. While he declined to disclose how much the retailer is putting into its EIR program, he labeled it “a big investment.”

Target needs the program to succeed for several reasons – perhaps the most important being the competition. It’s no secret Target is trying to shed its brick-and-mortar image and rebrand itself as an e-commerce innovator. The retailer spent $1 billion in 2015 to build up its e-commerce unit and saw 31% digital sales growth for the year, though that missed expectations of 40%. And digital sales account for only 3% to 4% of all of Target’s overall sales, trailing competitors such as Kohl’s and Macy’s, according to eMarketer.

In an effort to speed up innovation, Target began aggressively looking for entrepreneurs who could disrupt from within. The key: look for talent outside the company. Carl looked for seasoned entrepreneurs and intrapreneurs who have succeeded in launching brands, products or platforms. “I purposefully wanted to bring in the expertise of those who have done it before – and not just once but multiple times over – at scale.”

After meeting with dozens of entrepreneurs, Carl hired Stringfellow, Shewmaker and Law as full-time Target EIRs to work on projects he believes will propel Target ahead of the competition.

Diamond studs intact, Stringfellow arrived at Target’s Minneapolis headquarters as its first EIR in the spring of 2015. Though he has since changed roles (he’s now the president of internal innovations), Stringfellow continues to oversee a mysterious internal tech startup, codenamed “Goldfish.” He’s in the process of recruiting engineers and product managers in Silicon Valley, but declined to give any details other than labeling the project “super cool, “baller” and “brilliant.”

In addition to keeping tabs on Goldfish’s progress, Stringfellow is launching a retail startup accelerator in partnership with Techstars that starts in June. Techstars provides startups with mentorship and funding, and Target will have an opportunity to invest or potentially acquire startups that graduate from the accelerator.

Shewmaker’s approach has been different. Instead of juggling multiple projects, he came to the company with one radical idea. During his first week, he took his entire budget (Target declined to disclose that number) and invested it in building a “spectrometer,” a device that scans food items and gives consumers information on their nutritional value and freshness.

Food sales account for about $20 billion of Target’s business, so the investment makes sense for the retailer. But Shewmaker thinks his work could have industry-wide applications. “I see myself as a disruptor in the food industry in terms of transparency – not necessarily just within Target,” he says.

When Target ‘rears its ugly head’

With a number of startup projects in the oven, it looks like Target is moving quickly — for a Fortune 500 company, that is. At the end of the day, the EIRs must still report to a boss and get their ideas approved before they can pursue a moonshot. “Target rears its ugly head sometimes as a large company,” Carl admits. It’s his job to remove as many corporate roadblocks for the EIRs as possible.

Despite his best efforts, there are inherent cultural tensions that stem from operating a startup within a Fortune 500 company. Shewmaker says it’s still a shock to people when he pops into an office without an appointment or when he says he needs something “immediately.” For Stringfellow, who has described the culture as “a little passive-aggressive,” it’s the pace that bothers him most. For instance, Stringfellow says meetings that should only last two minutes run long due to the “Minnesota nice” behavior of the employees – meaning they are sometimes too polite and averse to confrontation.

Innovation is often hard to measure. In startup land uncertainty is taken as a given, but at a results-driven public company like Target, it can be a hard pill to swallow. On paper, innovating a traditional company from the inside out seems like a solid idea. In reality, it remains to be seen whether Target can incorporate new, untested practices into its long-term strategy. Stringfellow admits that it’s still a challenge to properly calculate a return on investment or net present value on a digital concept still in its infancy stage. And those challenges are likely to continue as the rule-breaking entrepreneurs carve their place within the company. The diamond nose studs were just the beginning — Shewmaker referred to himself as an “agitator,” and Law used the word “irritant.”

“Target understood they wanted EIRs, but I don’t think they understood what that meant,” Stringfellow says. “I am 100% certain they were not prepared for who they got.”