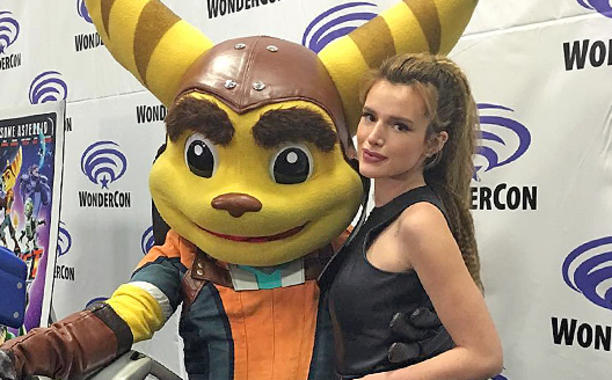 If you have a tween or teen girl in your home, the odds are pretty good that she’s a follower of actress/singer/novelist/dancer Bella Thorne. The former Disney Channel “Shake It Up” star has over 20 million followers across Facebook (FB), Twitter (TWTR), Instagram, and Snapchat. And the 18-year-old is already a seasoned TV and movie actress (having been on screen since age 6) with shows such as “Big Love” and “Scream” and movies such as Blended and The Duff. She also is a recording artist, a bestselling young adult author and a brand ambassador for Neutrogena.

According to business manager Justin Stiegemeyer of ‎R.C. Baral and Company, Thorne’s net worth is $4 million today. Altogether, Thorne’s movies have generated over $506 million at the global box office, according to BoxOfficeMojo.com. But she’s about to add to that. On Friday, April 29, her latest effort, Rachet & Clank, a computer-animated film from Gramercy Pictures and Blockade Entertainment, opens in theaters. Thorne pulls double duty providing the voice of Cora Veralux in the movie and in Insomniac Games’ latest Ratchet & Clank game for Sony’s PlayStation 4. It’s her first foray into video games.

She has eight other film and TV projects coming out over the next two years, and for the first time, she will serve as a producer, as well as the star, of a TV series for Freeform (formerly ABC Family). “Famous in Love” is created by Marlene King, the showrunner for the mega-hit “Pretty Little Liars,” and it is based on Rebecca Serle’s romantic novel of the same name. It is due to air in 2017.

In a phone interview with Fortune, Thorne talks about her multimedia career, upcoming TV series and what role social media has played in her success across multiple platforms.

Fortune: First, let’s talk about Rachet & Clank. You’re doing the voice for both the movie and video game, and this is your first video game. Why did you want to do it?

Bella Thorne: I really wanted to do the movie because I was hoping they would ask me to be in the video games. And when they asked me I was like, “Oh my God, thank God you guys mentioned it!” When they put me in the game, I was so stoked.

Given everything else you’ve already done and are doing, why is being in a video game so important to you?

I think it’s so cool. I really wanted to do a computer generated imagery (CGI) video game. To work in that environment and get to be behind-the-scenes about it is so cool. So that’s hopefully my next step, but just being in Ratchet & Clank’s video game is so awesome. My character is just a badass little female, so I [was] stoked to play her.

How was working on this game different than anything you’ve done before?

Looking at the video game script though, they’re like 3,000 pages long. It’s actually crazy because you have to literally do like every single thing…like I can open this door, that door, or I can get the fat hat. You can do all those different types of things. But you literally have to write out everything, which is so confusing, and it’s just so long. It’s actually crazy. And the art behind it is just so cool. When I got to do it, I don’t even know how many lines I had. I definitely had a lot of lines. I was in there for awhile.

“Famous in Love” focuses on a college student who lands a starring role in a Hollywood blockbuster and then struggles with fame and relationships. How much of this did you relate to it?

She is not like me at all. Her character is more girly-girl, preppy, very smiley, and she’s fake. In one of the first pitch meetings Marlene was reading off the five seasons and every time I’m like, “Oh, no way.” They thought I was joking and being ridiculous, but I was so genuinely shocked about these characters and where the story is going.

So I’m really excited that we get to show the dirty side of Hollywood. We get to balance what’s real in Hollywood and that’s great because we’re all behind the scenes. And since I’m an actor, I’m looking at it from a different perspective than maybe Marlene or Miguel (Arteta), our director.

How did the series come about?

So when we were thinking about bringing this (book by Rebecca Serle) to life, my manager had a connection with Marlene King. Marlene is one of the best showrunners, and she is the queen of scandalous (TV) if you watch “Pretty Little Liars.” When she read it, she loved it and so then we all came on board together and we sold it to ABC Family (now Freeform).We had a lot of meetings, and it was really cool to be completely behind that process.

I wanted to produce for a long time. This is just something for me to get experience with because I want to become a director, or a writer. I really want to study that, so producing is a real easy way to be behind the scenes all the time. I’m never in my trailer, ever. I’m always on set. I’m always behind the camera, asking the director what they’re doing and just figuring out the scene and the characters and the lighting.

What’s next for you outside of Hollywood?

I’m starting a backpack and shoe line with my sister Dani. We’re doing our sketches right now and I love her style. I’m a bit more sleeker than she is. She’s a little bit more about the bright colors, and when you stick them together it’s really cool.

And then I’m starting a dance class at the Millennium Dance Complex this summer, which is not really about routines. It’s more about girls just getting confident in their skin and their body and being able to dance in a group to music, and have fun and have a good workout. But at the end of the day, I want these girls to be confident in themselves as women.

I think it’s really important to show how beautiful the body is. The other thing it brings out is that it will make a lot of girls, really genuinely happy. It makes me happy. I’m just doing it because I want to do it. This will really make me happy to know that I’m having fun with all these girls, and they’re having fun as well.

What role does your massive social media following play when you launch these new business endeavors?

It plays out really well with that. Even now that I’m 18, I’m completely in control of my social media from head to toe. It’s great that I’m really just honest and comfortable and out there. If I’m going to wear short skirts, my fans are still going to like me. Why? Because I’ve always been doing that. That’s me. I’m not changing so that somebody will follow me on Instagram. You like me or you don’t, and if you don’t I don’t really care that much. That is what really plays a big role with my fan base.