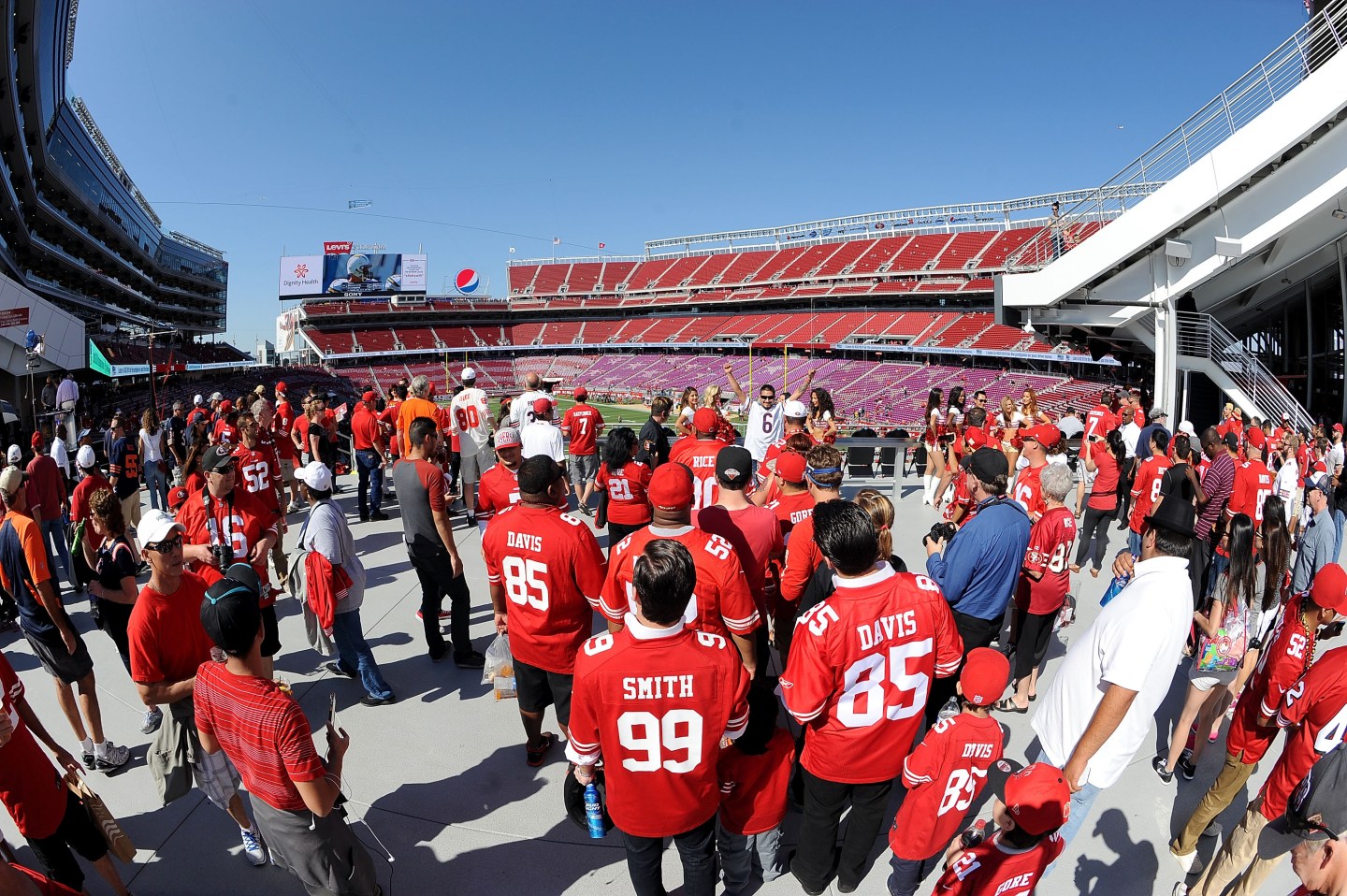 SANTA CLARA, CA - SEPTEMBER 14: A general view as fans fill up the stadium before the game between the San Francisco 49ers and the Chicago Bears at Levi's Stadium on September 14, 2014 in Santa Clara, California. (Photo by Noah Graham/Getty Images)
Photograph by Noah Graham—Getty Images

For their NFL Draft party on Thursday, fans of the Minnesota Vikings won’t just be hoping their team picks an apt player for the upcoming season.

They’ll be able to enter the party through digital tickets on the Vikings official app—and for the coming NFL season, Vikings fans could be ordering hot dogs and checking restroom lines right from the comfort of their seat in a brand new stadium.

With the opening of the U.S. Bank Stadium just four months away, the Vikings have upped the team-fan experience by partnering with VenueNext, a Santa Clara-based startup, to come up with a new version of their team’s mobile app that reinvents the game experience for sports fans from the driveway to the stands.

Through the new Vikings app, fans can preorder parking passes before arriving, transfer tickets to their friends, get turn-by-turn directions to the nearest concession stand, order a hot dog without moving from seats, and even buy merchandise and get it delivered to their home.

The app will see its debut at the NFL Draft party for Vikings fans on April 28, and is a part of the drive to make the fan experience a priority of the new U.S. Bank Stadium, after years spent at the much-maligned Metrodome and the temporary pitstop-TCF Bank Stadium. After all, the U.S. Bank Stadium does feature a fantasy football-centered area called Club Purple, stadium-wide WiFi, an art collection of 500 original pieces, and a 160-foot-long “Legacy Ship” made up of a huge LED screen parked on top of a specially-made ship.

But it’s the app that ties all the stadium amenities together into a convenient whole. And the Vikings can thank the San Francisco 49ers for helping out.

That’s because in 2014, it was Niners CEO Jed York who, in an effort to outfit the soon-to-launch Levi’s Stadium with the latest gizmos, called John Paul, his then-vice president of stadium technology, about creating a different experience for fans through Silicon Valley-born technology.

The result was VenueNext, a company that offers app-based solutions to venues. “We just want to improve the fan experience at the venue, and we try to center it around the smartphone and a great network that integrates with all these different systems at the venue,” Paul, VenueNext’s CEO and founder, told Fortune.

Starting off in Levi’s Stadium, VenueNext’s apps are seeing impressive adoption rates. Around 30% of fans are using the Levi’s Stadium app during 49er games—compared to the industry average of around 5%, says the company—and helped the stadium sell over $1.25 million of in-app food, beverage, and merchandise over its first year. The app flexed its muscles during Super Bowl 50 at the stadium this year, when app usage rates jumped to 46%, making up nearly half of all fans in the stadium.

VenueNext now powers the stadium apps hosting the Dallas Cowboys, Vikings and 49ers, and the NBA’s Orlando Magic. Part of the appeal of a central hub on a phone is the breadth of integrations within the same platform—for the Vikings team app, VenueNext has signed up partners like Ticketmaster, Appetize, Skidata and the NFL themselves to provide different aspects of the game experience, all from one app. According to Paul, a team app can be integrated with around 20 different systems to date, from loyalty programs to video content playback of live events.

Another secret sauce behind VenueNext’s app is the ability to take real-time data from an event, and turn it into real-time solutions. The app can track the number of people using the app, the inventory across all stands in a stadium, and help organizations make adjustments. For example, Paul explained that a venue operator can start to push parking passes to fans if it notices a bunch of no-shows for a game. Stadium operators could see that stands are running out of hot dogs during an NFL game, and can notify fans that their favorite game snack will disappear from the menu soon.

Combine the back and front end, and VenueNext could give sports teams and stadiums more control of their products, and even their finances.”We’ve found that those who are in their seats tend to order more. There is less waste, and we can move inventory to other ends of the stadium that may need it,” said Paul.

Even the main investors behind the company’s Series A funding round last year of $9 million hints at its potential. Causeway Media Partners, for example, has Wyc Grousbeck as its CEO, and Grousbeck also happens to be the co-owner of the NBA’s Boston Celtics, suggesting another possible future client. Live Nation produces all kinds of shows for different venues, expanding VenueNext’s potential beyond the sports arena, while Twitter Ventures’ involvement show how social media could provide a natural feed of live game tracking inside VenueNext’s all-in-one platform.

Paul has said the company plans to be in 30 different venues soon. “We see the venue as a piece of property,” he said. “And we want to improve the experience of coming to the property.”