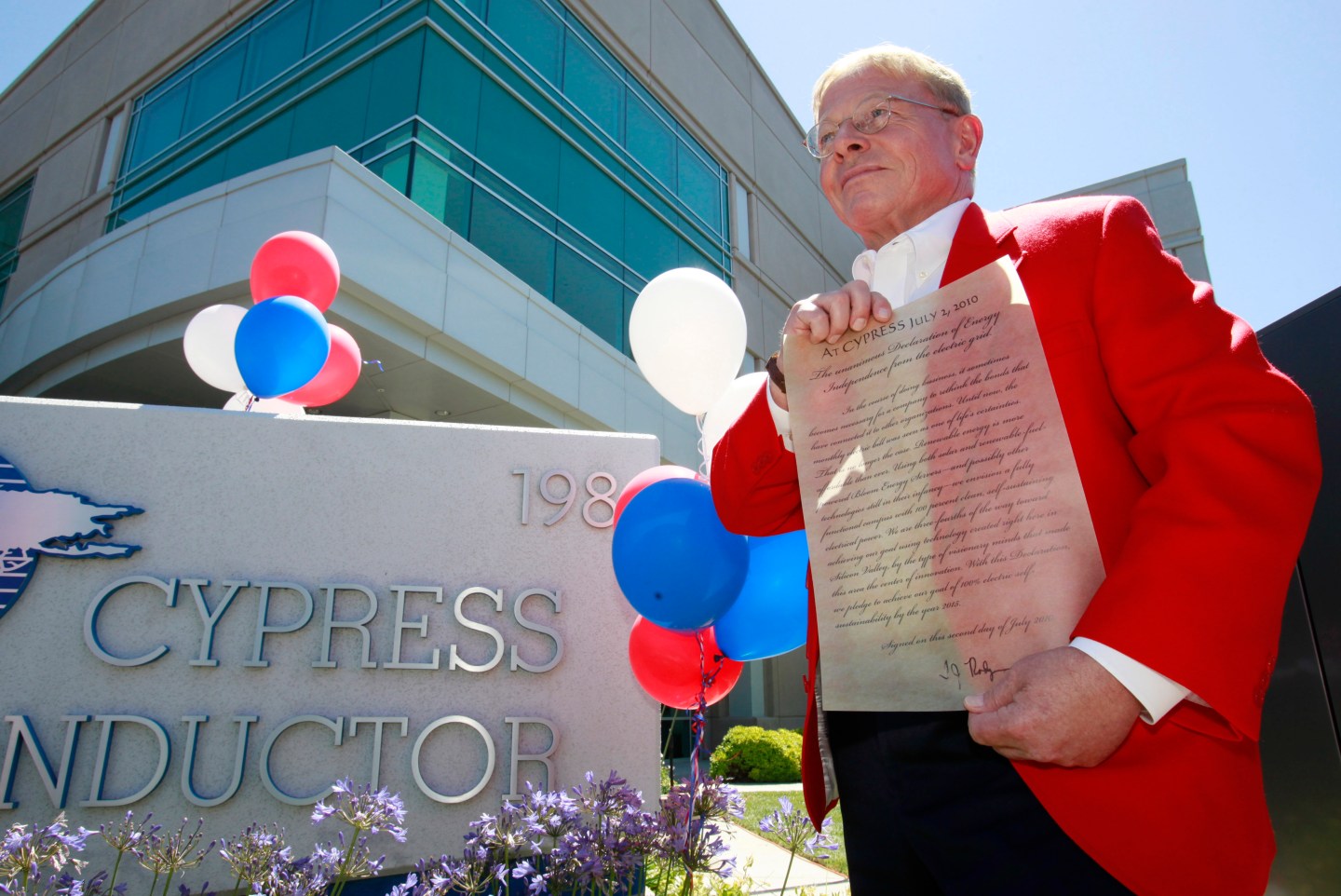 Cypress Semiconductor announced on Thursday that its chief executive officer, T.J. Rodgers, is stepping down. The chip maker is also buying Broadcom’s (BRCM) Internet of things division for $550 million in cash.

In a statement, Rodgers, who is 68 years old, said while he remains passionate about his work, he stipulated that he didn’t want to keep being “immersed” in operating a 7,000-person company. “To be completely candid,” he continued, “the board and even the executive staff have urged me to bring new blood into operations. Thus, the first-quarter 2016 report, my 120th as Cypress’s CEO, will be my last.”

The company is launching an internal and external search for a new CEO.

Rodgers received his bachelor’s degree from Dartmouth in chemistry and physics before going on to get his masters and Ph.D. degrees in electrical engineering from Stanford. While at Stanford, Rodgers invented a type of transistor called VMOS, or vertical metal oxide semiconductor. He founded Cypress in 1982.

In the Broadcom transaction, Cypress (CY) will get that company’s Wi-Fi, Bluetooth, and Zigbee products along with associated intellectual property. It will also acquire the Broadcom WICED brand and set of developer partners. Zigbee is a wireless technology that aims to assure that devices from different manufacturers can talk to each other.

In a separate statement about the Broadcom deal, Rodgers said Cypress is already a significant player in the so-called Internet of things market by virtue of its ultra-low-power, programmable system-on-chip (PSoC) technology. The drawback was that it could only pair those chips with generic radio communications devices.

“Now we have the highly regarded Broadcom IoT business—state-of-the-art Wi-Fi, Bluetooth and Zigbee RF technologies—that will transform us into a force in IoT and provide us with new market opportunities as well,” Rodgers wrote.

Putting low-power programmable devices out in the field is a key check box in the Internet of things, which relies on far-flung devices feeding data back to more centralized data aggregation points. Being able to program those gadgets remotely, and have them run for long periods of time on low-power is a key consideration

Cypress said the Broadcom transaction has been approved by the boards of both companies, and the deal is expected to close during the third quarter of 2016, pending the usual regulatory approvals.

Rodgers sparked some controversies during his time at Cypress. Most notably, ten years ago, he responded to a letter sent from a nun to Cypress shareholders, pushing the company to add more women and minorities to its board.

Suffice to say, Rodgers didn’t take that advice well. In his response, he wrote:

Bluntly stated a “woman’s view” on how to run our semiconductor company does not help us, unless that woman has an advanced technical degree and experience as a CEO. I do realize there are other industries in which the last statement does not hold true. We would quickly embrace the opportunity to include any woman or minority person who could help us as a director, because we pursue talent—and we don’t care in what package that talent comes.”