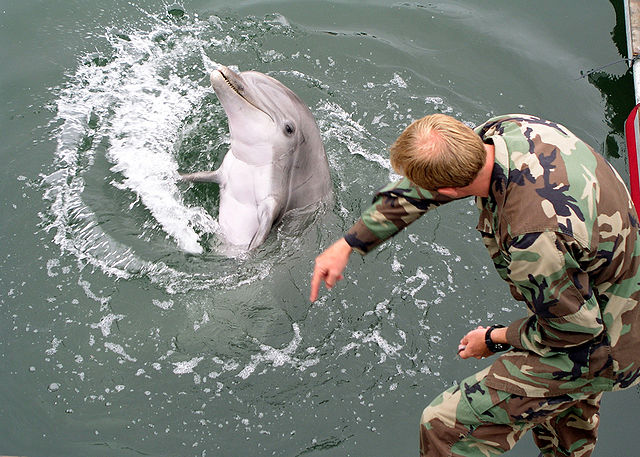 With oil prices in the tank and the ruble faring poorly, Russia’s Ministry of Defense has lately had to tighten its belt. But the Russian military did manage to complete a somewhat mysterious acquisition this week when it acquired five dolphins for reasons that aren’t quite clear.

The Russian Ministry of Defense put out a tender last month for five dolphins—three male, two female—between the ages of three and five years old, all with perfect teeth and good motor skills. Moscow’s own Utrish Dolphinarium was the sole bidder on the contract, offering up five bottlenose dolphins meeting the criteria for $26,000.

That a military might purchase dolphins is not completely out of the ordinary, as dolphins—and particularly bottlenose dolphins—have a lengthy history of naval service, including in the U.S. Navy. What is mysterious is that the Russian government has thus far declined to explain what its new dolphins will do for the Russian military.

The U.S. Navy has worked with dolphins and other aquatic animals since the 1960s. Their blend of high intelligence and uniquely sensitive biosonar signals quickly made trained bottlenose dolphins the animal of choice for missions like underwater mine and submarine detection. The Navy still keeps several dozen dolphins in its Marine Mammal program, and it deployed them during both Iraq conflicts.

The Soviet Union also experimented with dolphins at a facility near Sevastopol in Crimea, a facility that fell into Ukrainian hands after the fall of the U.S.S.R. and recently returned to Russian control following the annexation of Crimea in 2014. The Ukrainian government reportedly sold off several of its military dolphins (to Iran, no less) in 2000 as the cost of caring for the animals became unsustainable for the nation.

What makes this story so ripe for speculation is the secretive nature of these military marine mammal programs over the years, particularly during the Cold War. While the U.S. Navy claims it has never trained dolphins to carry weapons or otherwise participate in missions to physically harm humans or equipment, rumors abound that navies have trained the animals to lay underwater mines or carry explosive charges in kamikaze-style missions against enemy warships and submarines. When Ukraine sold its dolphins to Iran, for instance, a BBC headline read “Iran buys kamikaze dolphins.”

For more about Russia, watch:

More likely than arming its dolphins for undersea combat, Russia—like the United States—wants to use them for security purposes. Combat swimmers—that is, frogmen like the U.S. Navy SEALs specially trained for underwater operations—are extremely difficult to detect, especially at night. One of the best ways navies have found to keep enemy combat swimmers from infiltrating harbors and sabotaging or otherwise attacking ships, submarines, or other infrastructure is to deploy dolphins and sea lions, whose biosonar and keen underwater vision, respectively, are well-suited to detect objects or people hiding in the depths.

Russia claims that it has no combat aims for its new dolphins, but the Ministry of Defense won’t say exactly what it plans to do with the animals either, which is roughly par for course with these kinds of security programs. The dolphins will be delivered to Sevastopol, where the Russia’s military has a substantial naval presence supporting its Black Sea Fleet.