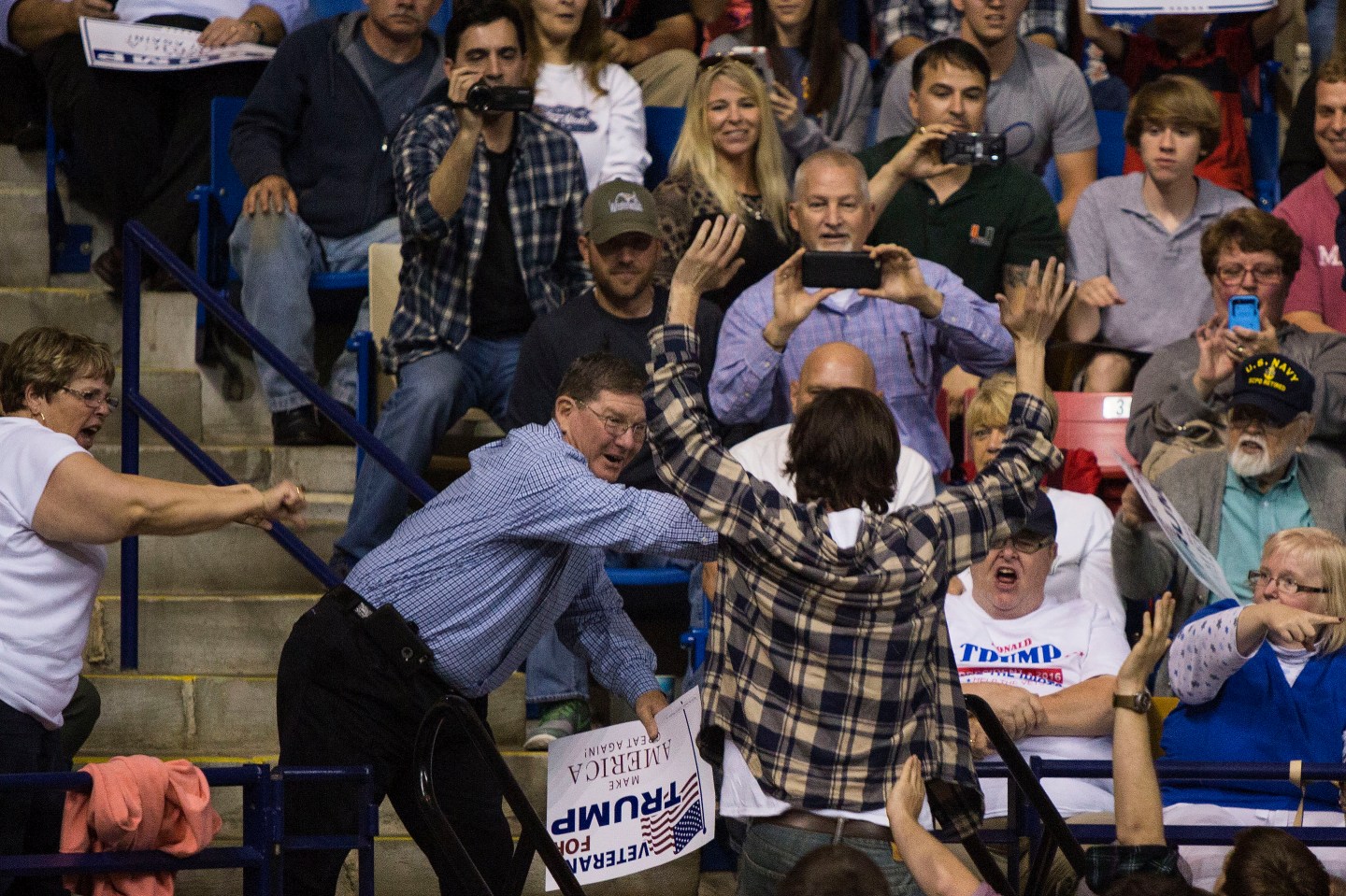 Corporations have long been a mainstay of political convention funding, lavishing money on the quadrennial festivals in order to bask in the limelight of presidential candidate selection while, at the same time, mingling with politicians to press their views.

This year, however, companies are worried that their corporate logos could be tarnished as irate delegates brandish nastily worded placards or engage in the fisticuffs and heated verbal exchanges that many fear will accompany a brokered convention. Republican backers have been especially cautious about overt participation, but big companies are also reluctant to help the Democrats finance their convention because they want to give to the Republicans as well in order to appear evenhanded.

That’s left both parties working hard to fill their convention coffers. Such handwringing among funders, while not entirely unexpected, is a major turnaround for American corporations that gleefully stepped into the presidential nominating cauldron years ago. As far back as 1972, former communications giant, International Telephone and Telegraph (IT&T), agreed to pony up $400,000 to hold the Republican convention in San Diego.

Of course, there’s a back story. The now defunct company was trying to win favor with Richard Nixon’s administration, which was threatening to pursue it for antitrust violations. And Nixon wanted the convention held in his home state of California. But when it emerged that the money was likely intended to be a tit-for-tat bribe and not a good-faith donation, San Diego was jettisoned and the convention swiftly relocated to Miami.

Despite such rockiness, convention financing issues smoothed out—for a while—when Congress approved public financing for the presidential election process. Party conventions then were funded with public money, and at modest sums by today’s standards—about $2 million for each convention. But the funding system began to fray in the 1980s as convention staging costs rose.

Lured by the opportunity to press their policies in private gatherings, and also to be a public face of the country’s best-known political ritual, corporations like Target, Microsoft, and AT&T began to chip in large sums.

But eagerness to fund seems to be thin these days, even in the face of Donald Trump’s desire to overhaul traditional convention programming, which is heavy on speeches. Trump, in a Washington Post interview earlier this month, said he wants to bring more “showbiz” to the proceedings and make them less boring. Sprucing up the usual convention fare would, presumably, attract larger audiences and prompt people to vote in November.

But with rising talk of convention turmoil—Cleveland’s police force is adding more gear for such an possibility—companies are reluctant to openly link their brands to the conventions. Target, for example, gave money to the conventions of both parties in prior cycles, but this year it won’t be giving any.

“This time, we have no plans to participate in either convention,” said Erika Winkels, spokeswoman for the Minneapolis-based retail giant.

Other substantial corporate funders like Duke Energy and Bank of America are playing coy. Even though the convention dates in July are barreling closer, these companies have yet to commit to a visible role in the convention doings.

In 2012, Duke Energy, the nation’s largest energy company, loaned Democrats $10 million for the convention held in Charlotte, which is where the company has its headquarters. It forgave the amount the next year. This year, it has yet to announce any funding intentions.

And four years ago, Bank of America, also based in Charlotte, contributed some $5 million to the Democrats and $4.1 million to the Republicans for their convention in Tampa. But the banking giant has yet to reveal its plans for this summer’s conventions.

Other big givers to Republican convention activities have included billionaires like casino mogul Sheldon Adelson and businessman David Koch. So far, these big names are not rushing to align themselves with Republican prospects Donald Trump, Ted Cruz, and John Kasich—although they could decide to do so as the convention gets closer.

Democrats also have some mega givers like George Soros, who has donated funds in the past. But attracting rich businessmen might be more difficult in a year when the two main Democratic contenders routinely accuse 1 percenters of being greedy and oblivious to others.

The uncertainty over what will be rolling out in Cleveland and Philadelphia has left some convention attendance packages—with hotel suites, welcoming parties, roundtables, hospitality areas, and the like—still up for grabs. But there are still some stalwarts like the biotechnology company Amgen, which spent $400,000 four years ago at the Republican convention in Tampa but nothing for the Democratic gathering. This year the company has committed to sponsoring events at both conventions.

So far, the Cleveland 2016 Host Committee has banked about 8o% of its goal of $64 million.

“We have raised $56 million,” said Emily L. Lauer, a spokesman for the Cleveland 2016 Host Committee, which raises money for the convention, to be held at the Quicken Loan Arena.

So far, the committee has said its official sponsors are the city of Cleveland, Cuyahoga County, and JobsOhio, a nonprofit company that promotes job creation and investment in Ohio.

For their part, the Democrats say their financing is doing well as Hilary Clinton and Bernie Sanders position themselves for the July 25-28 convention in Philadelphia.

“Our goal is $60 million, and we have raised north of $40 million in pledges and cash,” said Anna Adams-Sarthou, communications director for the DNC Host Committee, the nonprofit entity that raises money for the convention.

The Democrats are expected to announce a major giver in AT&T, which has been wiring the Wells Fargo Center—the sports arena where the convention will be held—to accommodate 35,000 attendees over the four-day gathering. Four years ago, the company contributed $3 million in in-kind donations to the Republican convention in Tampa.

Editor’s Note: An earlier version of this article incorrectly stated the $64 million fundraising goal for the Cleveland convention was of the Republican National Committee. Also, it stated that Cleveland group had raised 80% of that goal; at time of publication, it had raised 87.5% and deposited 80%.