This Is When Apple’s WWDC Conference Will Be Held 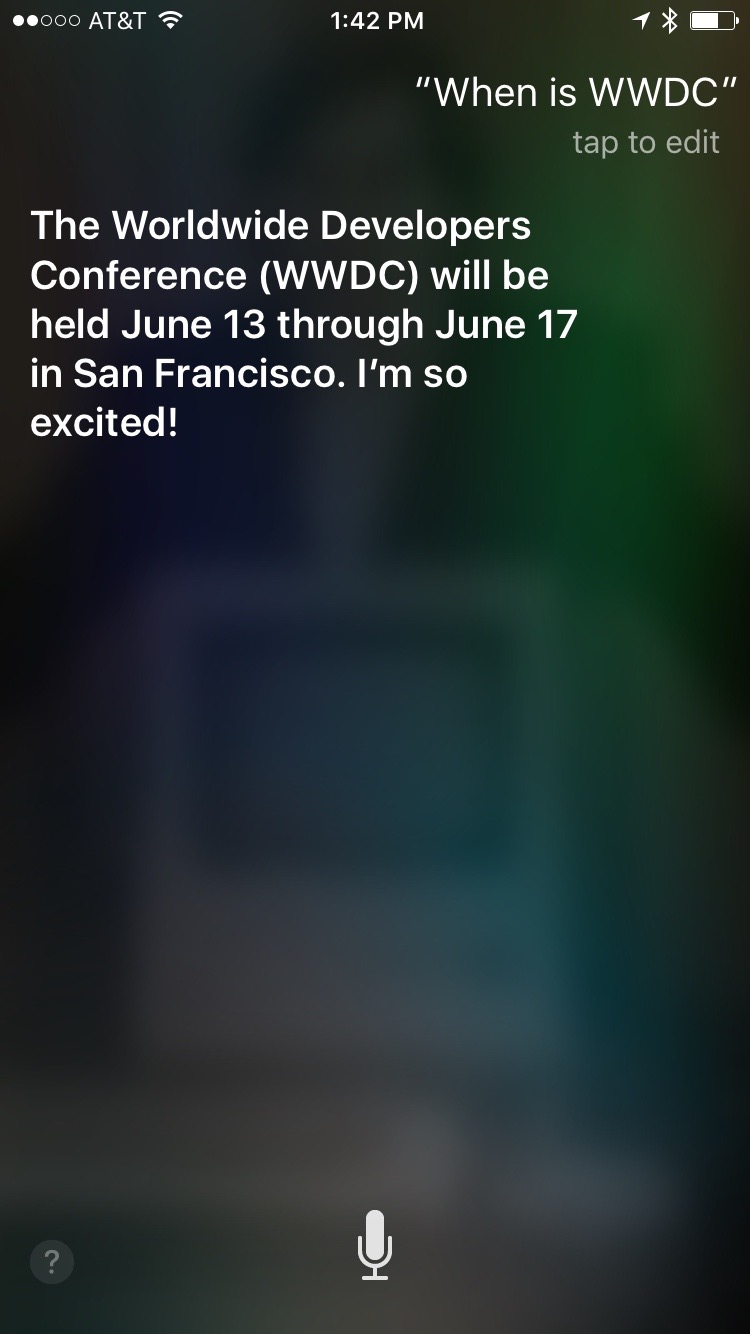 Siri reveals the dates of WWDC before Apple has made an official announcement.
Jason Cipriani

Siri was right. Apple just announced WWDC 2016 will indeed take place from June 13 to June 17, in San Francisco. However, instead of the entire event taking place at the convention center’s Moscone West, as has been the case in the past, the first days’ activities including the opening keynote and developer awards will be held at the Bill Graham Civic Auditorium. The rest of the event will move back to Moscone West.

The Bill Graham Civic Auditorium is the same venue Apple held its Sept. 2015 event where the iPhone 6S, new Apple TV, and iPad Pro were announced.

Developers interested in attending can sign up for the ticket lottery before Friday, April 22 at 1 p.m. ET. Winners will be notified on Monday, April 25.

As it turns out, Siri isn’t good at keeping secrets.

Earlier on Monday, multiple users on Twitter and Apple news tracking site 9to5Mac reported that Apple’s personal assistant was so excited about the company’s next developer conference that she revealed the official dates before the tech giant itself. The official WWDC website still reflected the logo and information surrounding WWDC 2015.

It is usually during the WWDC conference when Apple has historically announced new features for its operating systems, iOS and OS X. In the past, Apple has also used the stage time to unveil new products, such as Apple Music in 2015.

Prior to the official announcement from Apple, developers were left wondering when the ticket lottery would open up, but at least those interested in attending were able to look into booking hotel rooms and start planning other travel necessities.

Beyond speculation that Apple (AAPL) would change the name of its computer operating system from “OS X” to “macOS,” little is currently known about that to expect from the event.

For more on Apple Music, watch:

Before the official announcement, users were able to ask Siri “When is WWDC?” to get her response. In a test of Siri’s willingness to divulge secrets, I asked if Jon Snow from Game of Thrones was still alive. Her reply: “I’m not sure. Has he tried restarting? That always seems to work.”

Update (April 18 7:30 pm ET): This story has been updated following confirmation of the WWDC event’s dates.