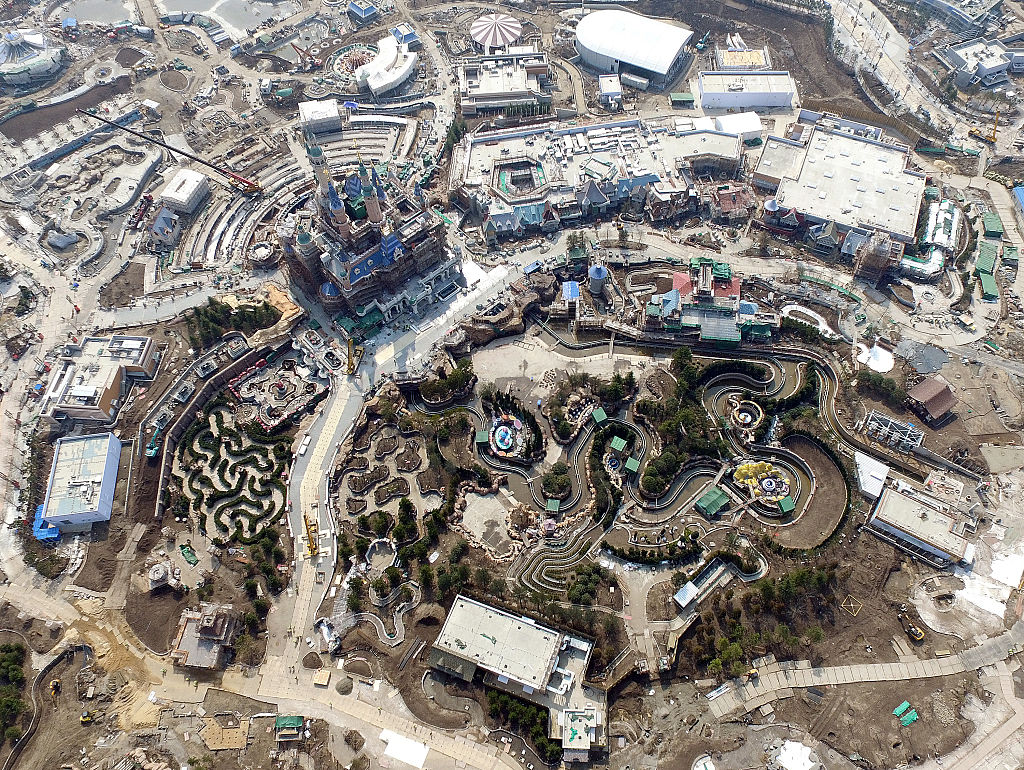 SHANGHAI, CHINA - FENRUARY 25: (CHINA OUT) Aerial view from an Unmanned Aerial Vehicle (UAV) shows Shanghai Disneyland Park is under construction on February 25, 2016 in Shanghai, China. Shanghai Disney Resort, a one-of-a-kind destination featuring Shanghai Disneyland which is the 6th in the world, 2 Resort hotels, Disneytown, Wishing Star Park and more, will welcome its grand opening on June 16, 2016. (Photo by VCG)***_***
ChinaFotoPress

China’s economy grew 6.7% in the first quarter, more evidence that the country has moved past the economic crisis fears of a few months back.

The government should hope that business confidence—and consumer spending—grow in coming months, as government stimulus is the big reason the economy is so far meeting the government’s target growth range of 6.5% to 7% growth for 2016. Exports are shaky and the service sector slowed down to 7.6% year-over-year growth from 8.2%.

“The still robust growth rate denotes the ability of the authorities to provide stimulus to the economy,” Marie Diron of Moody’s Sovereign Risk Group wrote today.

Evidence of the effects of government stimulus came in the form of a rapid rise in fixed asset investment—infrastructure, property—of 13.8% in the quarter, doubling the GDP’s rise. Government measures are also behind the real estate recovery, in the form of revamping real estate taxes and loosening lending standards.

The other big takeaway from first quarter data: as the old factory economy slows, consumers continue driving more of the economy. The consumer sector’s share of GDP rose to 56.9% in the quarter, from 54.9% in first quarter 2015. That’s growth, but it’s still short of the 80% rate in the U.S. and even 58% in India, according to World Bank data.

There’s still great skepticism over the veracity of official government GDP figures. But other indicators also show the economy is at least stabilizing.

Capital Economics’ China Activity Proxy (CAP) index puts the real growth rate closer to 4.1% in the first two months of the year. “Our CAP looks to have at least remained stable recently, suggesting that policy easing has at least helped to avert a deeper downturn,” China economist Julian Evans-Pritchard wrote.

In March, the economy looked to really pick up. In addition to the first quarter GDP numbers, China’s government today also released March financial figures that gave fresh confirmation of the March uptick.

Credit growth boomed back, hitting a 20-month high, suggesting that the government is opening up the debt spigots to stimulate growth.

The long-term problems of too much debt and inefficient state-owned companies being bailed out still exist in China.

But today’s releases, albeit backward-looking, show that the country pulled itself out of crisis mode for now.