The Process to Impeach Dilma Rousseff Cleared Another Big Hurdle 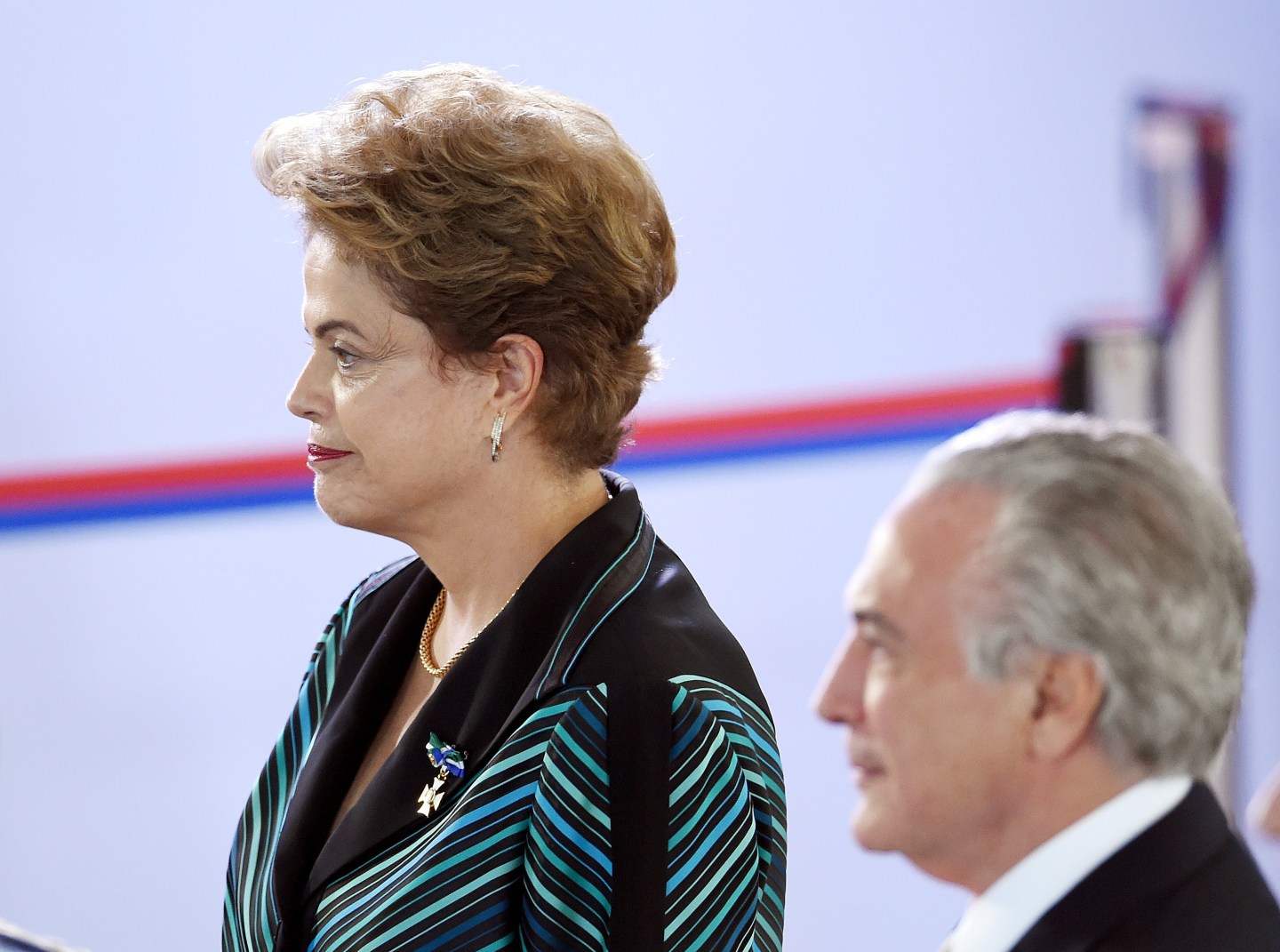 Brazilian President Dilma Rousseff (L) and her Vice President Michel Temer during the presentation ceremony of the new army generals at the Army Club in Brasilia, on December 16, 2015. Rousseff is fighting for her political life as she stands accused of illegal budgeting manoeuvres that she says were long-accepted practices by previous governments. AFP PHOTO/EVARISTO SA / AFP / EVARISTO SA (Photo credit should read EVARISTO SA/AFP/Getty Images)
EVARISTO SA AFP/Getty Images

A committee of Brazil’s lower house of Congress voted 38-27 to recommend the impeachment of President Dilma Rousseff, who faces charges of breaking budget laws to support her re-election in 2014.

A vote in the full lower house is expected to take place on Sunday. If two-thirds vote in favor, the impeachment will be sent to the Senate.

If the upper house decides by a simple majority to put Rousseff on trial, she will immediately be suspended for up to six months while the Senate decides her fate, and Vice President Michel Temer will take office as acting president.

It would be the first impeachment of a Brazilian president since 1992 when Fernando Collor de Mello faced massive protests for his ouster on corruption charges and resigned moments before his conviction by the Senate.

A former leftist guerrilla, Rousseff has denied any wrongdoing and rallied the rank and file of her Workers’ Party to oppose what she has called a coup against a democratically elected president.

Speaking to thousands of supporters in Rio de Janeiro, Rousseff’s predecessor and Workers’ Party founder Luiz Inacio Lula da Silva said Brazilian business elites were pressuring lawmakers to remove the president. Lula, who is under investigation in a graft probe, said he had convinced Rousseff to return to policies that favored Brazil’s poor.

The rift between Rousseff and her vice president reached breaking point on Monday after an audio message of Temer calling for a government of national unity was released apparently by mistake, further muddying Brazil’s political water.

Temer’s 14-minute audio message sent to members of his own PMDB party via the WhatsApp messaging app showed he was preparing to take over if Rousseff is forced from office.

The audio was posted on the website of the Folha de S.Paulo newspaper and confirmed to Reuters by Temer’s aides as authentic. Aides said it was accidentally released and they quickly sent another message asking legislators to disregard it.

In his message, Temer said he did not want to get ahead of events, but he had to show the country he was ready to lead it if needed.

“We need a government of national salvation and national unity,” Temer said in the audio. “We need to unite all the political parties, and all the parties should be ready to collaborate to drag Brazil out of this crisis.”

Rousseff’s chief of staff Jaques Wagner called the vice president a “conspirator” and said he should resign if Rousseff survives impeachment.

“Having joined the conspiracy, he should resign when it is defeated, because the climate will become unbearable,” Wagner told reporters.

Wagner said the government will continue working to muster enough votes to block impeachment in the lower house, encouraged by the fact that in committee the opposition had not won the two thirds it will need in the plenary.

The committee vote, however, is expected to sway undecided lawmakers to vote for Rousseff’s removal, said Claudio Couto, a politics professor at the Fundacao Getulio Vargas think tank.

“It has a snowball effect. With each approval, the chances of impeachment clearing the next chamber increases,” Couto said. “The wider the margin, the more momentum impeachment will gather.”

The Brasilia-based consultancy Arko Advice said committee votes for impeachment were higher than expected and it raised to 65 percent the odds of Rousseff being unseated by Congress.

The latest moves in Brazil’s political crisis have the country on edge as it faces not only a government meltdown but its worst recession in decades. The political chaos in the capital, Brasilia, is playing out less than 100 days before the nation plays host to the first Olympic Games to be held in South America – an event that will cast the world’s eyes on Brazil.

The battle over Rousseff’s impeachment has polarized the nation of 200 million people and brought the government of Latin America’s largest economy (and the world’s seventh-largest) to a virtual standstill.

Prosecutors say billions in bribes were paid over several years and have implicated not only members of Rousseff’s Workers’ Party but members of the opposition leading the charge to impeach her.

Eduardo Cunha, the speaker of Brazil’s lower house, a Rousseff enemy who is guiding the impeachment proceedings, faces charges of accepting millions in bribes in connection to the Petrobras case, while the head of Brazil’s Senate is also caught up in the investigation.

To battle to prevent impeachment approval in the full lower house vote, Rousseff’s government is trying to win over lawmakers by offering government jobs that became vacant when the PMDB quit her governing coalition two weeks ago.

The Brazilian real strengthened nearly 3 percent before Monday’s vote to an eight-month peak on expectations that the committee would decide to impeach Rousseff. Investors are betting that her removal will issue in more business-friendly policies to pull Brazil’s economy out of a tailspin